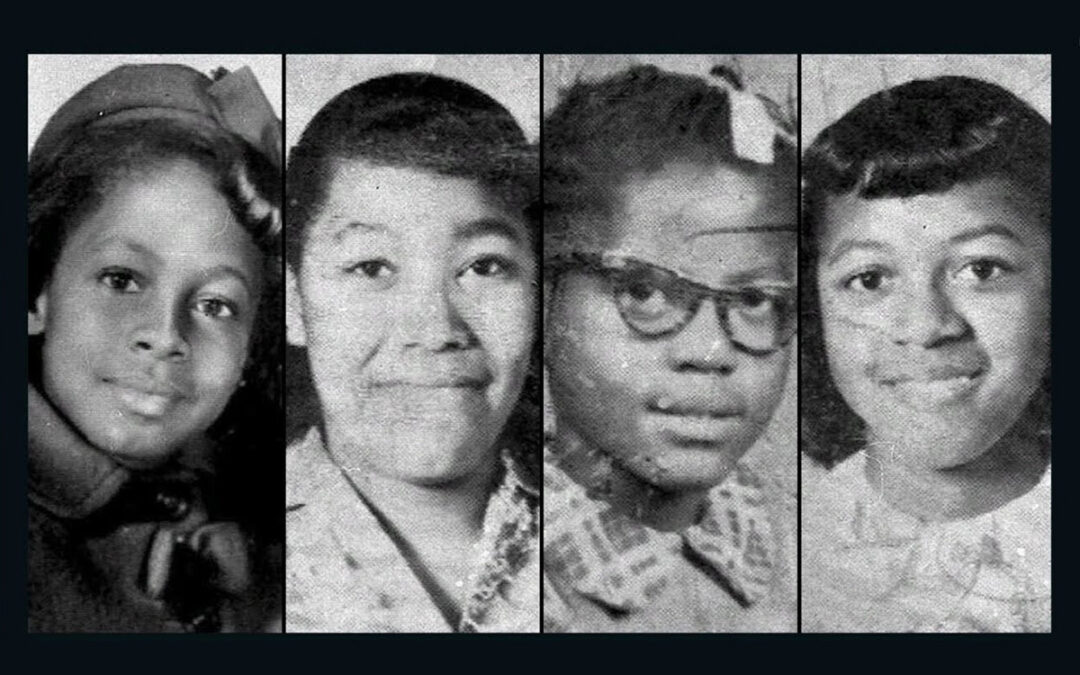 Those words were spoken by Martin Luther King Jr. at the memorial for those killed during the bombing of the 16th Street Baptist Church in Birmingham, Alabama on September 15, 1963. It was a terrorist crime perpetrated by white supremacists. In 1997, one of our greatest helmers, Spike Lee, made his first foray in feature length documentary filmmaking with “4 Little Girls.” It’s an inciting work –ever so urgent –deeply essential viewing. It displays Lee’s clear-eyed thoughtfulness and apt simmering rage.

At some point in our lives we’ve heard about the incident. A local chapter of the Ku Klux Klan placed bombs and they exploded as Sunday services were to begin. The act became a turning point in the Civil Rights Movement. “I don’t think the white community really understood the depth of the problem and the depths of the hate of the Klan and its friends in the south, in the north too for that matter, until that incredibly mean-spirited terrible crime of blowing up kids in a Sunday school basement,” explains venerable journalist Walter Kronkite. The following Summer, the United States Congress passed the Civil Rights Act of 1964, which was signed by President Lyndon B. Johnson.

What Lee affectingly does is get you to know who Addie May Collins, Carol Denise McNair, Cynthia Wesley and Carole Rosamond Robertson were – and understand the loss to the families who loved them. Through intimate interviews with the parents, siblings and close friends we get a richness of specificity about the young women. We learn details like the fact Carol played the clarinet. “The band was supposed to play the night after the bombing,” points out her mom, Alpha Robertson. Through family photographs and personal belongings – including the bible one of the girls had in her pocket the moment of the explosion – we get delineated portraits of four young promising schoolgirls – and they become etched in our mind. It’s bracing to see the level of emotion that they still exert from the witnesses.

We also get first-hand descriptions of what it was like being an African American and living in Birmingham in the 60s. “It was awful for young people to grow up in this city,” says Queen Nunn, a neighbor of Denise who begged her children not to go to Church on that fateful Sunday. She explains how difficult it was to keep a young thirsty kid from white-only water fountains. It is Denise’s father – Chris McNair – who gives one of the most heart-rending accounts when he tells us about a Christmas holiday going with his daughter to Kress’ department store to buy some ribbons and wrapping paper. Denise was hungry and could smell the hamburgers from the segregated lunch counter in the basement. “That night I knew I had to tell her she couldn’t have that sandwich because she was black,” he says. “That couldn’t have been any less painful than seeing her with a rock smashed into her head.”

After reading a 1983 “New York Times” magazine article by Howell Raines about the incident, Lee who was at the time a young New York University film student, wrote a letter to Chris McNair about making a fictional movie about his daughter. McNair didn’t respond. Years later after establishing his career he reached out once again but this time understanding that it needed to be a documentary and that it needed to include all the families. In a 2013 interview for the Hollywood Reporter, Lee says “it was a dumb idea when I wrote that letter to do it as a fictional account. It had to be a documentary. I didn’t want actors recreating the stuff. I wanted the parents, the mothers, the fathers, the sisters, the brothers. I wanted documents of them. I did not want this to be actors doing this. I wanted this to be a documentary.”

“Birmingham is a symbol of hardcore resistance to integration,” says Dr. King in archival footage. “It is probably the most thoroughly segregated city in the United States.” Lee gives us an understanding of the political landscape as well as summing up the brutality of racism. He interviews an elderly former Alabama Governor George C. Wallace – and he frames him behind a desk. Surreally, Wallace brings out his black aide Eddie Holcey who is reluctant to be filmed – and used as a pawn. “Couldn’t live without him,” Wallace declares.

June Collins – Addie Mae’s sister who seems to be suffering from post traumatic stress – opens up to Lee about how she feels. “Once upon a time I was real afraid of being on the outside as well as the inside,” she says. Lee – off camera gently prods to clarify. “Of anywhere. Because the bombing took … it happened in a church where you normally would feel safe. Or you’d think you were safe. And of all places, a church.”

Director Spike Lee on “4 Little Girls”
“The most trying moment I had was in post-production, when our great archivist Judy Aley had found post-mortem photographs of four girls, which were gruesome. And many nights, I prayed at night. It was a conflict. Should I include these shots or not? And finally, the Spirit told me to include it. I knew they were gruesome, but I still felt that we need to see the evil, the hatred, we need to see what those many sticks of dynamite did to the bodies of those four little girls. That’s why i included it. That’s one of the hardest editor decisions. It has to be the hardest editor decision I ever have to make.” (hollywoodreporter.com)

About Martin Luther King Jr.
Martin Luther King, Jr., (January 15, 1929-April 4, 1968) was born Michael Luther King, Jr., but later had his name changed to Martin. His grandfather began the family’s long tenure as pastors of the Ebenezer Baptist Church in Atlanta, serving from 1914 to 1931; his father has served from then until the present, and from 1960 until his death Martin Luther acted as co-pastor. Martin Luther attended segregated public schools in Georgia, graduating from high school at the age of fifteen; he received the B. A. degree in 1948 from Morehouse College, a distinguished Negro institution of Atlanta from which both his father and grandfather had graduated. After three years of theological study at Crozer Theological Seminary in Pennsylvania where he was elected president of a predominantly white senior class, he was awarded the B.D. in 1951. With a fellowship won at Crozer, he enrolled in graduate studies at Boston University, completing his residence for the doctorate in 1953 and receiving the degree in 1955. In Boston he met and married Coretta Scott, a young woman of uncommon intellectual and artistic attainments. Two sons and two daughters were born into the family. In 1954, Martin Luther King became pastor of the Dexter Avenue Baptist Church in Montgomery, Alabama. Always a strong worker for civil rights for members of his race, King was, by this time, a member of the executive committee of the National Association for the Advancement of Colored People, the leading organization of its kind in the nation. He was ready, then, early in December, 1955, to accept the leadership of the first great Negro nonviolent demonstration of contemporary times in the United States, the bus boycott described by Gunnar Jahn in his presentation speech in honor of the laureate. The boycott lasted 382 days. On December 21, 1956, after the Supreme Court of the United States had declared unconstitutional the laws requiring segregation on buses, Negroes and whites rode the buses as equals. During these days of boycott, King was arrested, his home was bombed, he was subjected to personal abuse, but at the same time he emerged as a Negro leader of the first rank.

In 1957 he was elected president of the Southern Christian Leadership Conference, an organization formed to provide new leadership for the now burgeoning civil rights movement. The ideals for this organization he took from Christianity; its operational techniques from Gandhi. In the eleven-year period between 1957 and 1968, King traveled over six million miles and spoke over twenty-five hundred times, appearing wherever there was injustice, protest, and action; and meanwhile he wrote five books as well as numerous articles. In these years, he led a massive protest in Birmingham, Alabama, that caught the attention of the entire world, providing what he called a coalition of conscience. and inspiring his “Letter from a Birmingham Jail”, a manifesto of the Negro revolution; he planned the drives in Alabama for the registration of Negroes as voters; he directed the peaceful march on Washington, D.C., of 250,000 people to whom he delivered his address, “l Have a Dream”, he conferred with President John F. Kennedy and campaigned for President Lyndon B. Johnson; he was arrested upwards of twenty times and assaulted at least four times; he was awarded five honorary degrees; was named Man of the Year by Time magazine in 1963; and became not only the symbolic leader of American blacks but also a world figure. At the age of thirty-five, Martin Luther King, Jr., was the youngest man to have received the Nobel Peace Prize. When notified of his selection, he announced that he would turn over the prize money of $54,123 to the furtherance of the civil rights movement. On the evening of April 4, 1968, while standing on the balcony of his motel room in Memphis, Tennessee, where he was to lead a protest march in sympathy with striking garbage workers of that city, he was assassinated. (nobelprize.org)

About Director Spike Lee
Spike Lee’s iconic body of storytelling has made an indelible mark on filmmaking and television. Recently, he Directed and Co-wrote the Academy Award® – nominated and critically acclaimed hit film “BlacKkKlansman,” winning the Oscar® for Best Adapted Screenplay. His career spans over 30 years and includes: “She’s Gotta Have It,” “School Daze,” “Do the Right Thing,” “Mo’ Better Blues,” “Jungle Fever,” “Malcolm X,” “Crooklyn,” “Clockers,” “Girl 6,” “Get on the Bus,” He Got Game,” “Summer of Sam,” “Bamboozled,” “25th Hour,” “She Hate Me,” “Inside Man,” “Miracle at St. Anna,” “Red Hook Summer,” “Old Boy,” and “Chi-Raq.” Lee’s outstanding feature documentary work includes the double Emmy® Award-winning “If God Is Willing” and “Da Creek Don’t Rise,” a follow up to his HBO documentary film “When the Levees Broke: A Requiem in Four Acts” and the Peabody Award-winning “A Huey P Newton Story.” In the Television area, he launched his Netflix original series “She’s Gotta Have It,” which ran 2 seasons on the platform. The series is a contemporary update of his classic film. Lee is also known for his legendary Air Jordan TV commercials and marketing campaigns with Michael Jordan for Nike. In 1997 he launched the advertising agency Spike DDB, a fully integrated agency with a focus on trendsetter, cross-cultural and millennial audiences. He recently Directed new additions to the Capital One “Road Trip” national campaign featuring Samuel L. Jackson and Charles Barkley. In addition to his films, TV series and commercials, Lee has directed a number of music videos and shorts for artists such as Michael Jackson, Prince, Public Enemy, Branford Marsalis, Bruce Hornsby, Miles Davis and Anita Baker. Spike Lee is a five-time Oscar nominee for his work on “BlacKkKlansman,” “Do The Right Thing” and “4 Little Girls.” He was awarded an Honorary Oscar in 2015 for his lifetime achievement and contributions to the state of motion picture arts and sciences. In 2019, he won his first Oscar with “BlacKkKlansman” for Best Adapted Screenplay. He is a graduate of Morehouse College and New York University’s Tisch School of the Arts, where he is a tenured Professor of Film and Artistic Director. Lee’s Production Company 40 Acres and a Mule Filmworks is based in Da Republic of Brooklyn, NY. (americancinematheque.com) His most recent films are “Da 5 Bloods” (2020) and “David Byrne’s American Utopia” (2020).