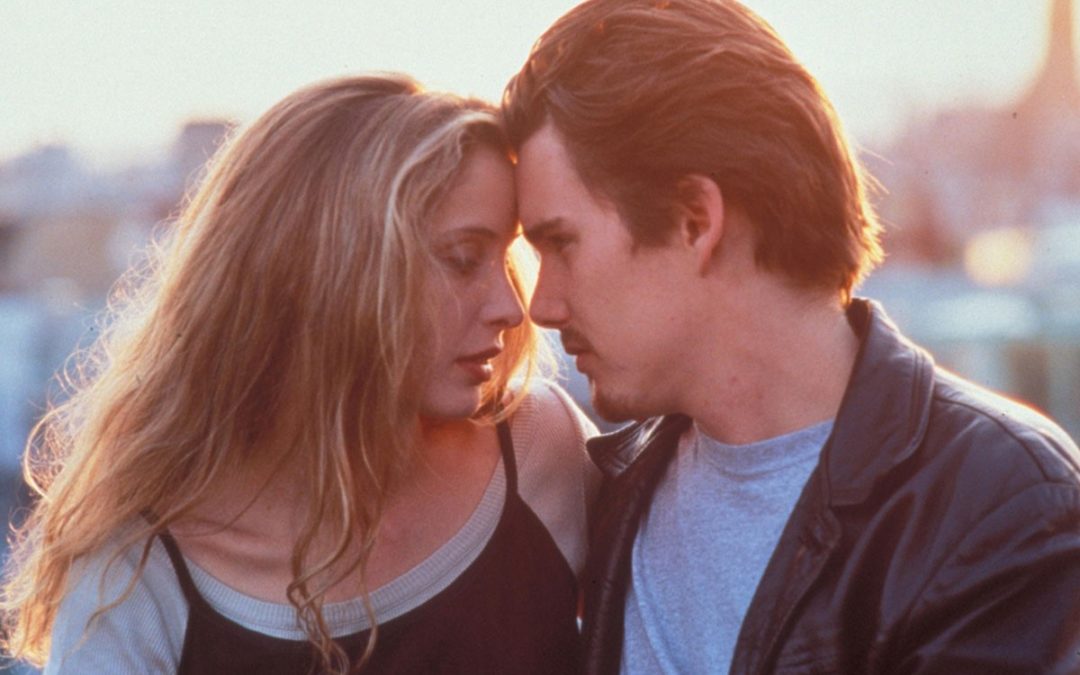 “Before Sunrise” is one of the most romantic movies ever made – and one that I return to over time as I age. It’s particularly special for me right now – understanding what the movie so eloquently proves: the greatest moments of connection between people are the fleeting ephemeral ones. In 1995 Richard Linklater cast a young Ethan Hawke and Julie Delpy as two people who meet on a train in Europe and impulsively decide to spend a day in Vienna – understanding that they will go their separate ways. What transpires between them are conversations – deep conversations – about parents – former loves – music – and life. Linklater like he does in his other films makes you aware of the fragility of time – the short-lived joys we cannot hold on to forever. There’s a deep vulnerability in this film that I feel you will understand and relate to – now more than ever. And who doesn’t remember that first sudden feeling of romantic love? Linklater, Hawke and Delpy reunited after this film – to create a trilogy – “Before Sunset” in 2004 – and “Before Midnight” in 2013 (which garnered them a Oscar nod for Best Screenplay.)

This movie attempts and succeeds in defining real love. I get emotional every time I hear Celine say “I think I can really fall in love when I know everything about someone – the way he’s going to part his hair, which shirt he’s going to wear that day, knowing the exact story he’d tell in a given situation. I’m sure that’s when I know I’m really in love.”

Have a lovely weekend,

Before Sunrise
(Available to rent on Amazon, YouTube, Google Play, iTunes and Vudu)

Ethan Hawke and Julie Delpy star as two young people who meet–and whose lives are forever changed–on a train from Budapest to Paris. They may have only one night, but when soulmates find each other, anything can happen Before Sunrise.

About Director Richard Linklater
Richard Linklater was born in Houston, Texas on July 30, 1960. A few of Linklater’s credits include Dazed and Confused, Before Sunrise, Waking Life, School of Rock, Before Sunset, Bad News Bears, Fast Food Nation, Me and Orson Welles, Before Midnight and Boyhood. Linklater founded Detour Filmproduction, a film-production company based in Austin and also serves as the Artistic Director for the Austin Film Society, which he founded in 1985.

The Making of Before Sunrise
“We shot in chronological order and worked on the script every weekend throughout the shoot,” Linklater said. “We went pretty far into this thinking they weren’t going to plan to meet again, and the night before, we were up until 3 in the morning rewriting the final scene.” (NY Times) According to actress Julie Delpy, “The original script was… kind of devoid of romance. It was a great blueprint, but it was even more cerebral and talky. He was keen to capture something very true, so wanted the two leads to be writers on the film as well – and he auditioned us about what we wanted to say. So Richard, Ethan and I produced the script together. The process was totally collaborative: all three of us had to agree on ideas for scenes. That’s how we did Before Sunset and Before Midnight, too.” (The Guardian)

Choosing Before Sunrise
The idea for the movie came to Linklater during a night spent with a woman he met in a Philadelphia toy store in 1989. “This girl was flirting with me while I waited for my sister [to finish shopping], so I wrote a little note like, “Hey, I’m in town for one night if you want to hang out.” Somewhere in the night I said to her, “I want to make a film about this. Just this feeling.” That’s really all it was trying to ever capture — that rush of meeting someone and that undercurrent of flirtation and romance.” (NY Times)