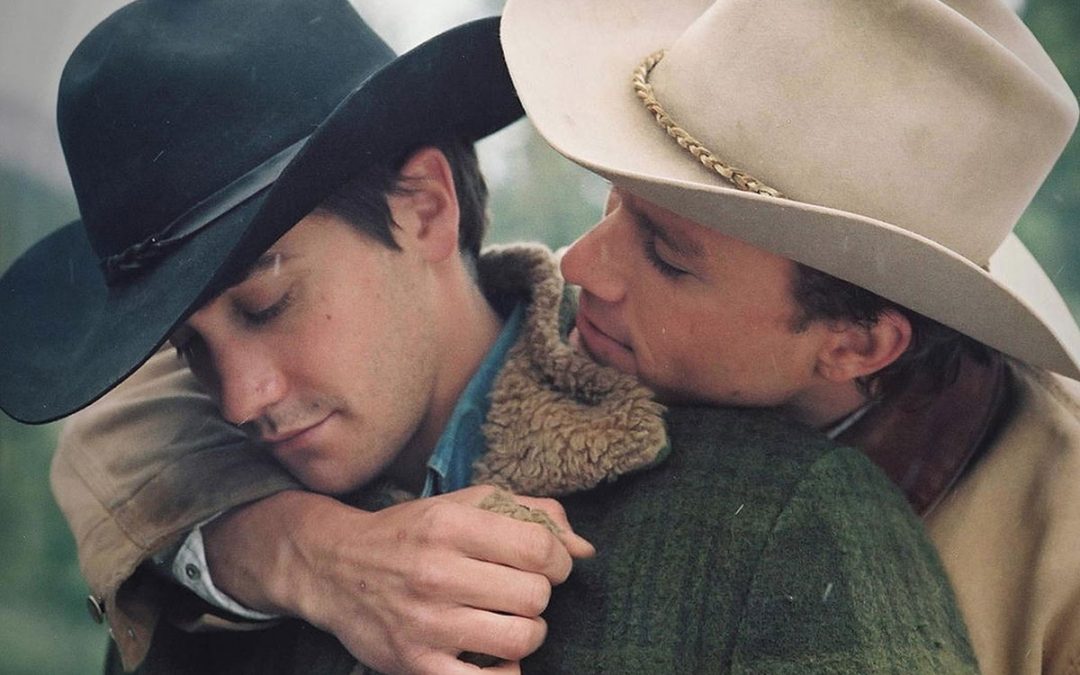 It’s been 15 years since the release of “Brokeback Mountain.” It’s one of the most beautiful and heartbreaking romances I’ve seen. Just like Romeo and Juliet – and Jack and Rose – Ennis del Mar and Jack Twist are star-crossed lovers. Instead of feuding families and an iceberg keeping them apart, social stigma, shame, homophobia and intolerance separate them. When it was released, “Brokeback” was labeled the “gay cowboy” movie. It’s a love story – and an enduring and nuanced one – magnificently directed and adapted – with two exemplary performances at its core. Since we’re in June and celebrating Pride Month – a time for self-affirmation, dignity, equality, and increased visibility of lesbian, gay, bisexual, and transgender people as a social group – I thought it was an opportune time to revisit the landmark film.

Adapting the short story by E. Annie Proulx, “Brokeback Mountain” underwent several attempts and went through several directors including Gus Van Sant and a recently revealed Lee Daniels. Ang Lee – the Taiwanese director of “The Wedding Banquet” and “Crouching Tiger Hidden Dragon” turned out to be the perfect choice. He’d directed the western “Ride with the Devil” and the Jane Austen romance “Sense and Sensibility.” His films have always focused on the push and pull between convention and modernity. The screenplay was done by Larry McMurtry (with Diana Ossana), whose novels and screenplays have explored the old West and contemporary Texas with such iconic work as “Lonesome Dove,” “The Last Picture Show” and “Hud.” It was considered a bad career move to play a gay role – and actors turned down the roles.

Set in 1963, introvert Ennis (Heath Ledger) and Jack (Jake Gyllenhaal) — are hired to tend to a rancher’s flock of sheep in Wyoming. Slowly and unexpectedly they find intimacy amidst the solitude and splendor of the mountains. They go their separate ways after that summer, marrying wives and raising children – but continue seeing each other furtively a few times a year. Jack wants them to risk it all and make a go at their relationship. “If this thing grabs a hold of us again at the wrong place and at the wrong time – we’re dead,” warns Ennis. Things do end up tragically. The lovers are not the only ones who agonize. We see the toll on the wives and children. Michelle Williams knows of their affair and enraged confronts Ennis in one of the many painful moments in the film.

Heath Ledger is prodigious as Ennis – especially after seeing his other work including his iconic turn as the Joker in “The Dark Knight.” Notice the way he mumbles his words – you understand the self-loathing and fear he’s grown up with. His teeth are clenched as if he’s holding back all the love he has for Jack. This man is breaking – inside and out. His performance is one of the best of this century. Jake Gyllenhaal does stand out work as well.

I’m still in awe of Ang Lee’s directing. I have taught his mise-en-scene to my students many semesters. He starts it with glorious loose frames of the mountains. There’s of course a sense of freedom and expansion as these two young men meet and fall in love. “Brokeback Mountain” is shot like the Garden of Eden. As the movie progresses – and the characters are pulled apart – visually scenes become tightly framed – the world is encroaching on them. Pay attention to the colors and all the lines framing one of the main characters as he visits the parents of his lover. It’s become quite an austere world and miles apart from the opening 30 minutes of the film. Observe as he walks upstairs and literally walks into a closet. By the time we get to the last scene it’s as if the world has shrunken.

“Brokeback Mountain” stands as one of the greatest films – and we’re so lucky we can revisit it time and time again. It’s one of those films that breaks your heart yet while doing it – it opens your mind to tolerance and acceptance.

Jack: “You are too much for me Ennis, you son of a whoreson bitch… I wish I knew how to quit you.”

Brokeback Mountain
Available to stream on Starz, DirecTV and to rent on Amazon Prime, YouTube, iTunes, and Google Play.

Discovering the Short Story
Pulitzer Prize-winning author Annie Proulx’s short story “Brokeback Mountain” was first published in The New Yorker in 1997. It won a National Magazine Award, among other accolades. The story was subsequently published in Ms. Proulx’s 1999 collection Close Range: Wyoming Stories. The screenplay adaptation was written by the team of Pulitzer Prize-winning author Larry McMurtry and Diana Ossana.

Diana Ossana: In October 1997, I was in Texas staying with Larry McMurtry and some friends, one of whom had given me The New Yorker with Annie Proulx’s short story. Two-thirds of the way through reading the story, I began to sob, and I sobbed all the way to the end. I was floored. Emotionally exhausted, I went to sleep, got up the next morning and read it again because I wanted to see if it affected me as much in broad daylight as it did in the middle of the night. Its effect on me was even more profound. I took the magazine downstairs and asked Larry to read the story.

Larry McMurtry: In 1997, Diana brought The New Yorker downstairs and asked that I read Annie’s story. I don’t read fiction much anymore, so I was reluctant. But in her tenacious way, she asked that I humor her and read it. After I was finished reading it, the first thing I thought was that I wished I had written it. It was a story that had been sitting there for years, waiting to be told, and Annie finally wrote it. It is one of the finest short stories I’ve read. The place, the landscape, the men and the way they speak are drawn precisely and convincingly.

Diana Ossana: He read it and said it was the best short story ever published in The New Yorker. “Well, do you think it would make a screenplay,” I asked. And he replied, “I think it might.” And I said, “Why don’t we write Annie a letter?” And he said, “Okay.”

Larry McMurtry: We wrote Annie a short letter, asking her to option the story to us so that we could adapt it for a screenplay. She responded within a week, and we launched into writing. So by the end of 1997, we had a screenplay. (cinemareview.com)

Ang Lee on Casting Heath Ledger & Jake Gyllenhaal
I wanted younger actors in their early twenties to play older. I think they have a better chance to achieve the twenty years that time passed. I think they’re among the best. They were suggested by casting director. There’s not a lot to choose from. They’re at the top. Heath, I like his disposition, he carries that western mood. I think he’s the anchorman for that western theme. He’s more macho and brooding, but provides the vulnerability, expressing his fear about violence. He also has that energetic power about him that carries the western literature, particularly at the turn of the last century. I think he’s that man for me. Jake, I choose him because he carried the romantic edge. I think they’re very different and compliment each other. I think they’re a great couple. I think there was a little bit of psychological fear factor that we were doing a challenging movie. I think that also forced the best out of them. I think the performances, especially the sex scenes, were unusual. I’ve done quite a few movies now. The fear factor actually brings the genuineness. They have to try their best. (movieweb.com)

About Director Ang Lee
Lee was born on October 23, 1954, in Taipei, Taiwan. He attended the National Taiwan College of Arts, where he graduated in 1975. He then relocated to the United States, where he studied at the University of Illinois at Urbana-Champaign and New York University.

Lee made his directorial debut in 1992 with Pushing Hands and earned Academy Award nominations for his next two films, The Wedding Banquet (1993) and Eat Drink Man Woman (1994). Later films include Sense and Sensibility (1995), which Lee earned an Academy Award nomination for best picture; The Ice Storm (1997); Crouching Tiger, Hidden Dragon (2000), for which he received four Oscars, four BAFTA Awards, a Golden Globe Award for best director; and Hulk (2003).

Lee went on to direct Se, jie (2007) and Taking Woodstock (2009). In 2006, he became the first Asian to win an Academy Award for best director, for his film Brokeback Mountain. Seven years later, in 2013, Lee picked up his second Academy Award for directing Life of Pi, based on the acclaimed best-selling novel by Yann Martel. The honor marked the first time a director won the Best Director Oscar for helming a 3-D movie. Life of Pi also garnered awards for cinematography, score and visual effects. His next film was another adaptation, Billy Lynn’s Long Halftime Walk (2016), about Iraq War veterans. In 2019 Lee directed Will Smith in the action drama Gemini Man, in which a hit man is hunted by his clone.
(biography.com)