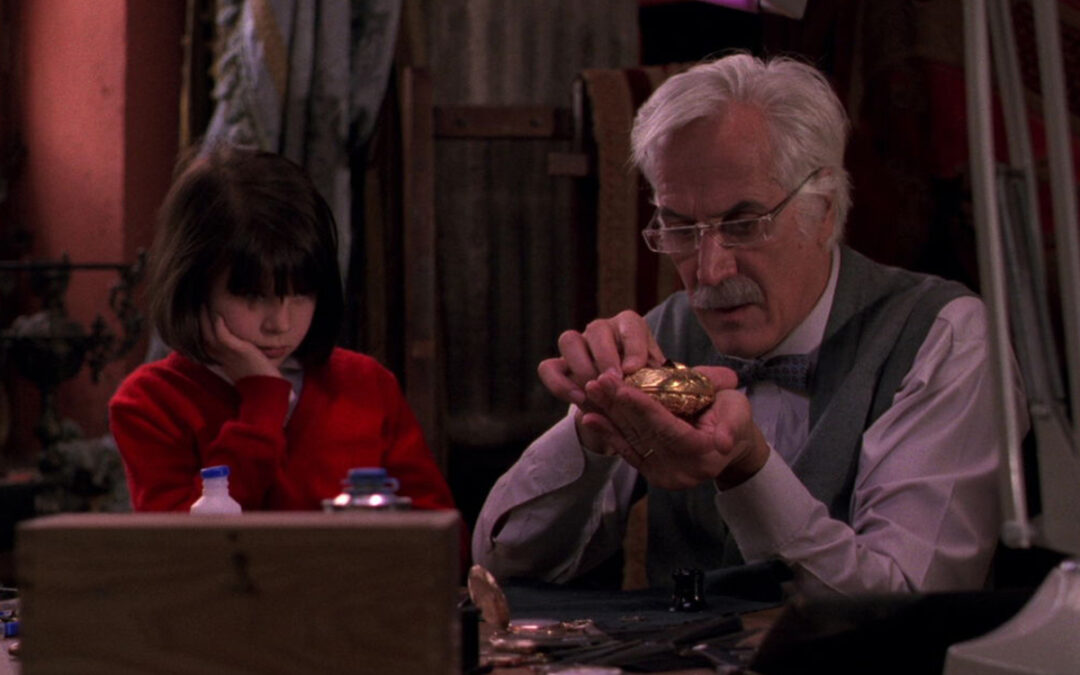 “Suo tempore.” (Everything in its time.)

Midnight on a Friday evening meant creature feature on television in Panama. My brother and I would get dispensation from our parents to stay up late and watch. The station would repeat some titles, and I didn’t mind. Especially if it meant getting to see again “The Fly” (1958) or “Creature from the Black Lagoon” (1954). I never found them scary. I thought they were fun. They ignited my imagination. I was well aware there was a fable quality to them, that they carried a social commentary or warning. I forever sympathized with the monsters. They were always misunderstood, and represented the outcasts of society.

And so there I was at the Museum of Modern Art in March 1994 for the New Directors/New Films Festival, and a young Mexican man with coke-bottled glasses came out to introduce his sophisticated and poetic film “Cronos” (1993) about a man who reluctantly becomes a vampire. “Monsters are symbols of power,” Guillermo Del Toro said without a bit of irony. “I have been saved by them, because monsters are the patron saints of our imperfections.” Later I will cross paths with Guillermo when he comes to Santa Barbara for a screening of “Pan’s Labyrinth” in 2006 at the Metro theatre and two more times after the release of his Best Picture and Best Director Academy Award winning “The Shape of Water” in 2017. Every time he has elaborated on that original idea. Monsters are an embodiment of what makes us human – our limitations – our deficiencies. They represent the possibility of failure.

How come I haven’t recommended one of El Gordo’s films prior to today? Better late than never. It goes without saying that I’m a big fan – and I find him to be a kindred spirit. Seeing his first feature “Cronos” was very emotional that first time in the early ‘90s. How times have changed. I remember how some snobs were questioning the inclusion of this film at the festival. Tastes caught up with Del Toro’s vision and artistry.

There’s a lot of wonder in “Cronos,” and a lot of it comes from the young child, Aurora, who observes with a sympathetic eye what is happening to her grandfather. In a prologue, a narrator tells us that in the 1500s there was an alchemist in Veracruz, Mexico who created a mechanical object in the shape of a scarab which can give you eternal life – and that in 1937, a building had collapsed, and a white skinned, mummy-like character was uncovered with part of the debris encrusted in his heart.

Elderly Jesus Gris runs an antique shop – where Aurora spends most of her time. He uncovers at the base of a statue of an archangel the ornate scarab device – golden and with a precious gem atop. After inspecting it closely, he winds it up and it inserts a needle into his skin. The following day he starts to notice that his skin is more supple and that he feels younger.

Millionaire Dieter De La Guardia has been looking far and wide for the Cronos for he knows it has the power to restore his youth and his health. He’s dying of cancer and has gone through every possible treatment – having parts of his body removed by science. He keeps those parts like relics on an altar by the side of his bed. He gets word that Jesus has found the mechanism he’s longed for, and sends his nephew – henchman – Angel de La Guardia. If you know Spanish the names of the characters are intentionally filled with double-meaning…Guardian Angel…Dawn…Jesus.

Guillermo creates a brand new cinematic world from myths, religion, entomology and old movie tropes – and it’s all packaged with great gusto. Jesus Gris starts to feel a change in his body, and at a New Year’s Eve celebration follows a man with a nose bleed into the bathroom. He’s been beckoned by the smell and the power of blood. A drop falls on the tiles. Jesus is as confused and befuddled as you the viewer are – and the way he impulsively reacts is unforgettable.

Del Toro loves his cinema and relishes the usage of colors, something he’ll continue throughout his career. In the antique shop the walls are painted red and Aurora wears a red sweater. Dieter’s world is recessive and bathed in greys. The crane shots and camera movements remind me of a Vincent Minelli movie. It’s always moving lyrically. There’s one segment that is poetic and glorious — when Jesus is thrown off a cliff by Angel to his mortal death and reborn. The camera – upside down – lingers in low-key lighting obliquely on Jesus as he takes his last breath. “So quiet,” he says. “My god. So much blood. All that blood is mine. I’m dying. Unbelievable. Everything’s upside down. I’m dying. Alone. Don’t let me die today. How much. I can endure so much more.” And the camera tilts and pulls away. Later on, at the funeral parlor, there will be rebirth – as his body is almost ready to be cremated. It’s brilliantly macabre and funny. The director of photography is Guillermo Navarro who will win the Oscar for “Pan’s Labyrinth.” The music by Javier Alvarez uses tango flourishes evocatively.

Mercedes: “How could I change so much in so little time?”

The Making of “Cronos”
“It is a very personal film that in many ways reverses the cliches of a regular horror film while following them religiously,” said Mr. del Toro. The contradictions are many. In “Cronos,” the monster turns out to be the most humane character; an almost silent 8-year-old girl ends up being the strongest character, and a physical brute is really a sensitive character preoccupied by reducing the size of his nose. The film’s producer, Bertha Navarro, said the cryptic nature of the film, combined with Mr. del Toro’s inexperience, made it difficult to raise the $2 million it cost. “Like Water for Chocolate” is the only Mexican film to have had a bigger budget. “It’s not just a horror film or a foreign film; it’s a mixture,” said Ms. Navarro during an interview about “Cronos” in her home here in Guadalajara. “That’s what is most attractive about it but also what made it most difficult to sell to backers.” About 20 percent of the cost of “Cronos” came from film institutes and nonprofit organizations in Mexico. For the rest, the producers turned to outside financiers, credit cards and Mr. del Toro’s parents, who run a Nissan dealership here. Mr. del Toro managed to bring together an impressive international cast, including the Latin American stars Federico Luppi and Claudio Brook, as well as Ron Perlman, who for four seasons played the beast in television’s “Beauty and the Beast.” “Cronos” enjoyed a critical success in Mexico, though fewer than 50,000 people saw it, according to Mexican film industry figures. The producers are now turning their attention to the United States, though it’s not clear who they expect the audience there to be. Mr. del Toro said he was not after a general one. “It’s a movie with great appeal for an audience that appreciates an artistic vision on common themes.” A bit later he reconsidered and said, “This is a movie with so many influences that it will find its own audience.” (nytimes.com)

About Director of Photography Guillermo Navarro
Guillermo Navarro was born and raised in Mexico City. He was a still photographer in Mexico before segueing into shooting documentaries and commercials. He has worked in Hollywood since 1993 and is a frequent collaborator of Guillermo del Toro. He earned his first narrative film credit in 1985 with “Love Around the Corner,” and since then his filming experience has been consolidated by important titles including “Pacific Rim,” “Pan’s Labyrinth,” “The Devil’s Backbone,” “Hellboy,” “Jackie Brown,” “Desperado,” “Stuart Little,” “Spy Kids” and “Night at the Museum” among others. In 2006 he won the Oscar Academy Award for Best Cinematography for “Pan’s Labyrinth,” and also received the Goya, the Spirit Award, Ariel and Golden Frog at Camerimage for his work on the film. He combines his work in feature films with his work in commercials, shooting with important directors including Traktor, Noam Murro, Kinka Usher, Baker Smith, Julio del Álamo and Bruce St Clair. (planbfree.com)

About Composer Javier Álvarez
Javier Álvarez was born in México City, México whose reputation extends globally. His music combines influences from around the world and incorporates music technologies. Álvarez studied composition and clarinet with Mario Lavista and traveled to the United States to study at the University of Wisconsin, Milwaukee. He later moved to England in the early 1980s and attended the City University in London and the Royal College of music under the direction of John Lambert. His compositions’ span over multiple genres and almost always incorporate different electroacoustic and traditional instruments. Between the years of 1993-1999, Álvarez served as a fellow for the Mexican Endowment for the Arts and Culture and was a founding member of the Sonic Arts Network. In 1993, he served as the Artistic Director of the Society for the Promotion of New Music. During his residency in England, he served as part of the music faculty teaching composition and computer music technology at the City University in London, the Guildhall School of Music and Drama, the Royal College of Music and the University of Herfordshire. Álvarez is a recipient of numerous awards including the Mendelssohn Scholarship, the Lionel Robbins Award, the Gemini Fellowship, the ICEM Prize in Paris (1987), the Bourges International Festival and Austria’s Prix Ars Electronica (1993). His music has been performed around the world, most notably by ensembles such as the Chicago Symphony Orchestra, the London Sinfonietta and Mexico City Philharmonic. (sphinxmusic.org)

About Writer and Director Guillermo del Toro
Guillermo del Toro is among the most creative and visionary artists of his generation, whose distinctive style is showcased through his work as a filmmaker, screenwriter, producer, and author. Born in Guadalajara, Mexico, del Toro first gained worldwide recognition for the 1993 Mexican-American co-production, “Cronos,” a supernatural horror film, which he directed from his own screenplay, after beginning his career working as a special effects makeup artist. His subsequent films include “Mimic,” “The Devil’s Backbone,” “Hellboy,” “Pan’s Labyrinth,” “Hellboy II: The Golden Army,” “Pacific Rim,” and “Crimson Peak.” He earned international acclaim as the director, writer, and producer of the 2006 aforementioned fantasy drama, “Pan’s Labyrinth.” He was honored with an Oscar nomination for his original screenplay for the film, which won Academy Awards for Art Direction, Cinematography, and Makeup. In all, the film garnered more than 40 international awards and appeared on more than 35 critics’ lists of the year’s best films…del Toro wrote and directed “The Shape of Water,” which was nominated for 13 Academy Awards, and won 4, including Best Director and Best Picture. He also won a Golden Globe for Best Director and was nominated for Best Screenplay and Best Motion Picture-Drama for “The Shape of Water.” He also won a DGA, a Critics’ Choice Movie Award, a BAFTA for Best Director, and a PGA for the film. (wmespeakers.com)