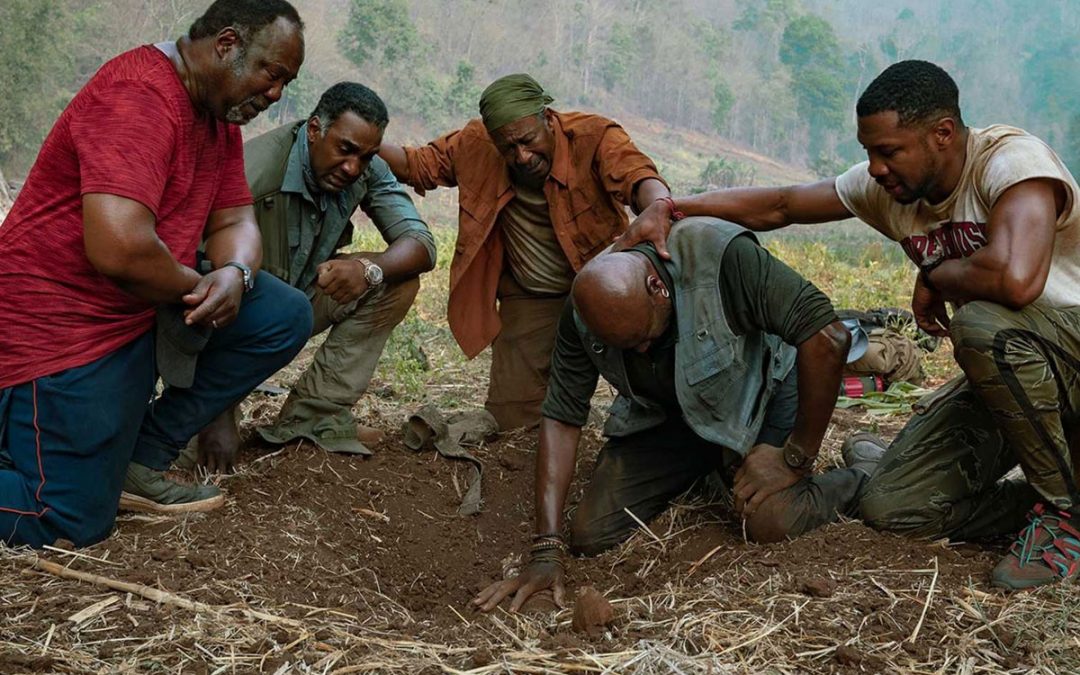 “DA 5 BLOODS” – which starts playing on Netflix today – is the best movie of 2020, and it is as incendiary, funny, exhilarating and mad – as it is artistically superb and rich. It demands immediate viewing and repeated viewings after. It is form and content and zeitgeist all colliding at once. It is Spike Lee’s most ambitious undertaking and an unqualified knockout. A true shot in the arm for these discombobulated times, “DA 5 BLOODS” is the most articulate and channeled form of sound, sight and fury.

It tells the story of four African-American Vets — Paul (Delroy Lindo), Otis (Clarke Peters), Eddie (Norm Lewis), and Melvin (Isiah Whitlock, Jr.) — who return to Vietnam to search for the remains of their fallen Squad Leader (Chadwick Boseman) and a buried treasure. Their journey is interspersed with flashbacks to the late ‘60s while the men try to come to terms with a war and a country that asked them to enlist while continuously treating them with inequality and racism. The gold they’re looking for might serve as their rightful reparation.

I strongly feel that the least you know about this journey the better – for part of its deliciousness is in its unpredictability. Spike has always been a director that has flourished under apparently uncontrolled chaos – and in bringing all forms of contradictions and beliefs into collision. It is in those moments where the film soars. He is there to reflect the times – and there’s no better approach for 2020. He doesn’t attempt to give answers but to put a mirror up to America.

I do need to point out that one of the exhilarating aspects of watching “DA 5 BLOODS” is seeing what a true lover of cinema Spike Lee is. He obviously relishes in taking inspirations from classic films like “The Treasure of Sierra Madre,” “The Bridge on the River Kwai,” and “Apocalypse Now.” For the latter, he will go as far as using Wagner’s “Ride of the Valkyries.” Yet he samples those films not solely as tributes but as a way of subverting the myths they’ve created. In one of the most poignant moments, he will paraphrase Joseph Conrad’s ending to his novel “Heart of Darkness.” “The Madness, the madness” will become a cry that will not only speak about the war in Vietnam but to the current racial injustices.

In the flashbacks the actors are not made to look younger – a fantastic choice – for it instantly connects the past and the present. In an incredible cast of performers, Delroy Lindo has a towering turn in a Shakespearean level role. Paul (who voted for Trump and wears a MAGA hat) is the best character in Spike Lee’s long canon of unforgettable ones. His gradual descent into madness is heartbreaking and utterly extraordinary. Lindo should win the Best Actor Oscar.

I could go on and on. Notice the ratio changes when we go to the past. Enjoy the digressions. Terrence Blanchard’s score is phenomenal. The usage of Marvin Gaye’s songs is integral to the storytelling. Pay attention to how at the beginning of the trip into the jungle, it is all big and expansive. As the story progresses, the jungle begins to impinge on the characters.

“DA 5 BLOODS” brings the sins of not so long ago to the present – to the now – to what’s currently happening. It explores the issues surrounding American imperialism. Spike Lee knows that the war has not ended.

About Writer and Director Spike Lee
Spike Lee’s iconic body of storytelling has made an indelible mark on filmmaking and television. Most recently, he Directed and Co-wrote the Academy Award® – nominated and critically acclaimed hit film BlacKkKlansman, winning the Oscar® for Best Adapted Screenplay.

His career spans over 30 years and includes: She’s Gotta Have It, School Daze, Do the Right Thing, Mo’ Better Blues, Jungle Fever, Malcolm X, Crooklyn, Clockers, Girl 6, Get on the Bus, He Got Game, Summer of Sam, Bamboozled, 25th Hour, She Hate Me, Inside Man, Miracle at St. Anna, Red Hook Summer, Old Boy, and Chi-Raq. Lee’s outstanding feature documentary work includes the double Emmy® Award-winning If God Is Willing and Da Creek Don’t Rise, a follow up to his HBO documentary film When the Levees Broke: A Requiem in Four Acts and the Peabody Award-winning A Huey P Newton Story. In the Television area, he launched his Netflix original series She’s Gotta Have It, which ran 2 seasons on the platform. The series is a contemporary update of his classic film. Lee is also known for his legendary Air Jordan TV commercials and marketing campaigns with Michael Jordan for Nike. In 1997 he launched the advertising agency Spike DDB, a fully integrated agency with a focus on trendsetter, cross-cultural and millennial audiences. He recently Directed new additions to the Capital One “Road Trip” national campaign featuring Samuel L. Jackson and Charles Barkley.

In addition to his films, TV series and commercials, Lee has directed a number of music videos and shorts for artists such as Michael Jackson, Prince, Public Enemy, Branford Marsalis, Bruce Hornsby, Miles Davis and Anita Baker. Spike Lee is a five-time Oscar nominee for his work on BlacKkKlansman, Do The Right Thing and 4 Little Girls. He was awarded an Honorary Oscar in 2015 for his lifetime achievement and contributions to the state of motion picture arts and sciences. In 2019, he won his first Oscar with BlacKkKlansman for Best Adapted Screenplay. He is a graduate of Morehouse College and New York University’s Tisch School of the Arts, where he is a tenured Professor of Film and Artistic Director. Lee’s Production Company 40 Acres and a Mule Filmworks is based in Da Republic of Brooklyn, NY.

About Writer Kevin Willmott
Kevin Willmott is an Academy Award and Bafta Award winning screenwriter and filmmaker who has written and directed six feature films and numerous documentaries. The feature films include: Ninth Street, CSA – Confederate States of America, The Only Good Indian, The Battle for Bunker Hill, Destination Planet Negro! and Jayhawkers. Most recently he co-wrote the award winning, Blackklansman and the Da 5 Bloods with Spike Lee. As well he just completed, The 24th about the Houston riot of 1917 which had it’s World Premiere at the 2020 South by Southwest Film Festival. He is a published playwright and works as an activist for peace and civil rights issues. He is a graduate of Marymount College of Kansas and NYU’s Tisch School of the Arts. He is a Professor in the Film and Media Studies Department at The University of Kansas.

AN ALBUM, AN ANTHEM AND BEYOND
The 11th Studio Album from Marvin Gaye, “What’s Going On” provided the film’s musical and thematic underpinnings. “One of the greatest albums ever made,” Spike Lee says. “Marvin is a saint. He is godlike. That album spoke to us as the record of the time. I knew that The Music would help the narrative.”
Six of the Album’s Songs are featured in The Film — “Inner City Blues (Makes Me Wanna Holler),” “Wholy Holy,” “Flyin’ High (in the Friendly Sky),” “What’s Happening Brother,” “God Is Love” (sung by Lindo) and “What’s Going On” — as well as one of Gaye’s later Tracks (“Got To Give It Up”).

“When I saw the first cut and I heard the Marvin Gaye songs, my first reaction was, ‘ Right, this makes total sense,’” said Da 5 Bloods composer Terence Blanchard, Lee’s collaborator for three decades. “Next I started thinking about growing up in the ‘70s, and all the dudes I saw in my neighborhood that used to walk around with the tattered military jackets and shirts, who fought in Vietnam. They were struggling — emotionally, mentally. It brings me back to that period in time where African-Americans were struggling for certain rights. I still remember as a kid going someplace in Louisiana and seeing the water fountains that said, ‘For Coloreds Only.’ It’s that common theme of just trying to be recognized as equals, generation after generation. Frankly, you get tired of it.”
Gaye’s younger brother, Frances “Frankie” Gaye, served three tours of Vietnam War duty. While working as a Radio Operator during those years, Frankie wrote letters to Marvin, recounting the daily horrors he witnessed. Frankie’s descriptions gave Marvin a starting point for the album.

The entire song cycle shares the perspective of a Vietnam veteran who is shunned when he returns home to the USA. Gaye’s lyrics reference both battleground atrocities in Vietnam, and the concurrent civil unrest in America. With his lilting four-octave range, he discussed Radicalism, Unemployment, Ecology, Pollution and more. Some classify the title track, “What’s Going On,” as a Protest Song, while others claim it as a Love Song. Norman would assert that it’s both — like Lee and Gaye beforehand, the character maintains that those who truly love their country will examine how its citizens are treated.
“You could make a documentary about trying to figure out how many people that music kept alive,” Blanchard said. “When you put the songs into context with this movie, they become even more powerful.”

Prior to filming, Lee led The Cast in a close reading of the album’s lyrics. “Once we started getting into the script and the dramaturge of this whole piece, we had one day where we actually sat down and just listened to Marvin Gaye’s ‘ What’s Going On, ’” Lewis said. “Each song was broken down. It really helped us in developing our characters.”

“What’s Going On” was also a poignant selection because of what happened after its release. Gaye’s life ended when his father shot him on the eve of his 45th birthday, in 1984. As Blanchard worked, he was moved that Da 5 Bloods explores how the Vietnam War rendered multitudes of men — like Paul and Otis — incapable of being loving, hands-on fathers.