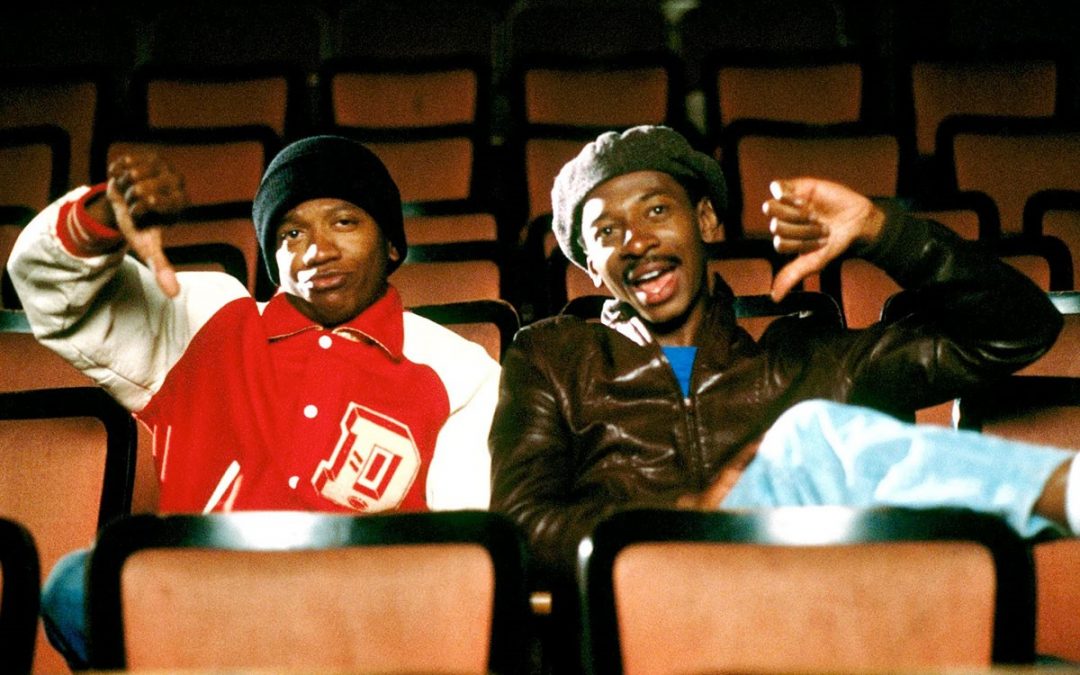 In 1987, comedian Robert Townsend wrote, directed and acted in a satire of African American stereotypes in cinema with “Hollywood Shuffle.” There’s a sting to the spoof. Starting in the silent film era, Hollywood portrayed blacks in insensitive ways on the big screen. In 1915, D.W. Griffith’s “The Birth of a Nation” presented black men as rapists and subhuman. One of the biggest box-office draws of all time, its success gave rise to the Ku Klux Klan. For a long while after, black performers were relegated to playing butlers, maids, slaves or gang members. It is this inaccurate view of black lives in cinema that Townsend ridicules.

“Hollywood Shuffle” is still hilarious. I hadn’t laughed this much in a long time. Based on Townsend’s personal artistic struggles, “Hollywood Shuffle” is about an aspiring actor – Bobby Taylor – who dreams of becoming big in Hollywood but understands how limited his choices are. He makes ends meet by working at a hot dog stand called “Winky Dinky Dog” while longing to be in a movie entitled “Jivetime Jimmy’s Revenge.” The casting calls are racist. His grandmother believes he should get a respectable job at the post office. When he finally gets the gig, he starts to have second thoughts for he realizes the part he’s playing is demeaning and not a positive role model for his little brother.

The clever aspect of the film is that Townsend literally articulates the dreams – and struggles of Bobby – and we get fantasy vignettes spoofing all the cliché ways that Hollywood and TV have pigeonholed black actors. In a way, the film plays out like a simple plot told with “Saturday Night Live” type skits. There’s the spoof of sitcoms like “Diff’rent Strokes.” A commercial for Hollywood’s First Black Acting School where performers are taught how to play butlers, slaves or drug dealers so they can get work in Hollywood. And even “Siskel and Ebert” gets skewered. The latter becomes a chance for Towsend to make skits within a skit – parodying movies like “Dirty Harry” and “Amadeus.” Some work better than others. They all have an anarchic quality to them that reminds me of the Marx Brothers movies.

The movie cost $100,000 to make. Townsend put 40k on his own credit cards. He asked cinematographers for leftover film stock. Knowing all of these facts only makes the film shine even more. You don’t see artistic concessions – you actually see bounds of ingenuity and enthusiasm.

The satire is still sharp and poignant.

Hollywood Shuffle
Available to stream on Amazon Prime, Vudu and to rent on YouTube, iTunes, and Google Play.

The Origin of Hollywood Shuffle
In an interview with Filmmaker Magazine, Robert Townsend talks about the idea behind Hollywood Shuffle. He had this to say. I was going out on some great auditions, and then there were some really bad auditions for stereotypical roles. Keenen Ivory Wayans and I would go on these auditions and laugh at the parts, which were pimps, runaway slaves … we thought it was really funny. The scenes in Hollywood Shuffle depicting the audition process are not that far-fetched – they were very close to our experiences! We’d see some actors who were very proper, Harvard and Yale trained, and they’d have to read for these parts where they’re saying “I ain’t be got no weapon!” and the casting directors would say “You’re not black enough.” Or the casting directors would be on the phone and eating their lunch while you’re pouring your heart out doing an emotional scene. There are also actors who will try to psych you out. The scene in Hollywood Shuffle where the other actor says to me, “Don’t sell out, Bobby, all they want us to do is play butlers and slaves,” was based on something that happened to me when I was auditioning for A Soldier’s Story. There was an actor who kept saying, “Yeah, they got the white man trying to tell the black man’s story,” and I’m sitting there thinking, really? It seems like a good script to me. Then they call this guy and he jumps up with a smile – “Here I come, yes sir!”

After I did A Soldier’s Story, I went to my agent and said “I want to do more movies like this,” and my agent said, “Robert, they only do one black movie a year, and you just did it, so be happy.” I auditioned for The Color Purple and I didn’t get the part so I said, “Oh man, I’m gonna miss my black movie this year!” I had $60,000 in the bank from doing commercials and movies, and everybody was like “Are you going to get a Porsche? Are you going to get a Jag?” I decided, no, I’m going to make a movie. I talked to Keenen and said let’s make a movie about everything that we’re going through, and we wrote it together and that’s how it got started.(filmmakermagazine.com)

No Permits, No Problem
In the same interview with Filmmaker Magazine, Robert Townsend discusses how they got around not having filming permits. Townsend said, “when we scouted locations, my rule was that if the police couldn’t see us it was a good location. We also shot our exteriors on Sunday mornings; for the “Black Acting School” we met at my house at 5:30am on a Sunday, then drove together to Mandeville Canyon and climbed up through all these little crevices and things. I said, “if the police want to crawl all the way up here to get us, they’re welcome to it!”

In other cases I learned the value of bartering – to shoot the “jive time Jimmy” stuff we had to move refrigerators. I saw all this trash and old refrigerators and heaters outside the location, and I told the owner, “Me and my boys’ll move all that if you let us shoot inside for two days.” We rented two vans, one for the actors and one for the equipment, and we would have to do wardrobe changes really fast because I could only do three takes of each scene – otherwise the police would come. Sometimes actors who thought they were going to be runaway slaves would suddenly have to throw on clothes and be zombie pimps! We just had to get in and get out – it was like Mission: Impossible.(filmmakermagazine.com)

About Writer, Director and Actor Robert Townsend
Robert Townsend, was born in Chicago, Illinois on February 6, 1957, the second oldest of four children to Shirley and Robert Townsend. Growing up on the Westside of Chicago, Townsend was raised by his mother in a single parent home. As a child Townsend watched TV where he learned to do impersonations of his favorite actors such as Jimmy Stewart and Bill Cosby for his family and classmates. Eventually his abilities caught the attention of Chicago’s Experimental Black Actors Guild X-Bag Theatre in Chicago and then moved him out to The Improvisation, a premiere comedy club in New York City. Townsend also had a brief uncredited role in the 1975 movie, Cooley High.

Townsend’s comedy career began to take off at the Improvisation and he soon headed to Hollywood where he performed on comedy specials such as Rodney Dangerfield: It’s Not Easy Being Me. Townsend also landed minor role in films such as A Soldier’s Story (1984) with Denzel Washington, Streets of Fire (1984) with Diane Lane, and American Flyers, a 1985 movie staring Kevin Costner.

In the late 1980s Townsend decided to become a filmmaker and director. His first film, Eddie Murphy: Raw, appeared in 1987. Without any funding beyond his money he co-wrote, directed, and starred in second first film, Hollywood Shuffle (1987) which received critical acclaim. In 1991 he directed and starred in The Five Heartbeats, a powerful biographical drama based loosely on the lives of the rhythm and blues group, the Dells. He then directed and starred in The Meteor Man (1993) with James Earl Jones and Bill Cosby.

Between films Townsend also produced the award winning show, Robert Townsend and his Partners in Crime, a variety special. His other productions include Townsend Television and The Parenthood. At the NAACP Image Awards in 2001 he made history by directing three performers nominated in the category of best actor or actress in three different films in 2000: Leon Robinson for his role in Little Richard, Alfre Woodard for her role in the Showtime film, Holiday Heart, and Natalie Cole as herself in Livin’ for Love: The Natalie Cole Story.

Townsend has been a speaker of the United Negro College Fund; he speaks primarily to inner city youth about the possibilities of following their dreams. Townsend has recently taken on a new role as CEO of Productions for the Black Family Channel. Most recently, Townsend has directed a number of episodes for television.(blackpast.org)