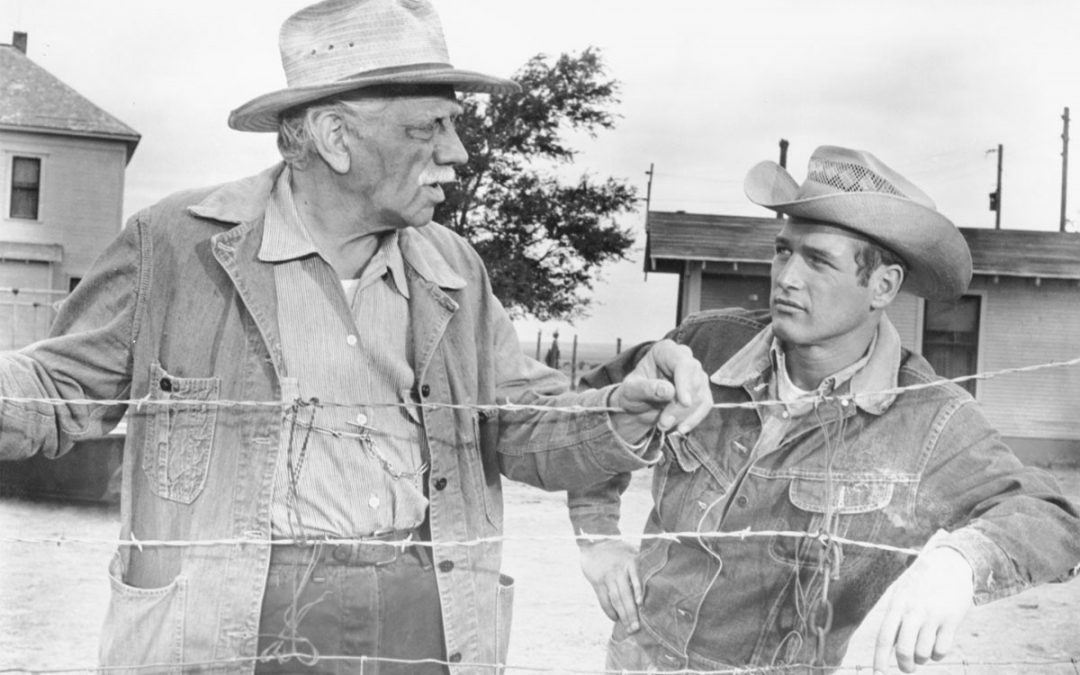 “Why this whole country is run on epidemics. Where’re you been? Epidemics of big business, price-fixin’, crooked TV shows, income tax finaglin’, souped-up expense accounts. How many honest men you know? You take the sinners away from the saints you’re lucky to end up with Abraham Lincoln.” Those words are spoken by Hud Bannon, played by a never more charismatic Paul Newman in “Hud.” I had seen this Academy Award winning film many times before, but in the past few weeks I have gravitated to it – studying it obsessively. Last night, those words took my breath away. How could this groundbreaking contemporary Western from 1963 be so prescient and so relevant to this very moment in our lives?

Based on a novel by Larry McMurtry, the film pivots around the generational conflict on a cattle ranch in small town Texas during the early 1960s between traditional and honest Homer Bannon, and his son, Hud, who is unprincipled – a hard drinker and a womanizer. Caught between them is young Lonnie – who is Homer’s grandson and Hud’s nephew – and is being swayed by Hud’s bad influence. Things get exacerbated when one of the cows dies mysteriously and Homer decides to call the state veterinarian – for it may be foot and mouth disease and they could start an epidemic. Hud argues that they will quarantine them and worse – the government will force them to kill all their cattle. He suggests selling them – and passing them on to someone else. Homer contacts the authorities and after testing the cattle – he’s forced to round them all up and slaughter them to prevent an outbreak. Hud advocates digging for oil and making money that way. “There’ll be no holes punched into this land,” argues Homer. “I don’t want that kind of money I want mine to come from something that keeps a man doin for himself.” We also find out that Homer blames Hud’s drinking for Lonnie’s father’s death. Their struggle is that of long-established values of honor and integrity versus unscrupulous capitalism.

Other important relationships in the film involve their world-weary housekeeper – Alma – who is the object of desire of both young Lonnie and Hud. She proves to be a barefooted, tempting combination of swagger and motherly benevolence – and unforgettably embodied by Patricia Neal in her Oscar for Best Actress performance. Melvyn Douglas as Homer was also feted with a Best Supporting statue.

Director Martin Ritt creates an indelible sense of place. He decided to shoot the film in black and white and hired cinematographer James Wong Hoe who created this intense contrast between light and darks. As a matter of fact, even during daytime outdoor scenes, the shadows and blacks on screen seem to be intentionally overpowering the landscape – which totally fits with Hud’s corrupt personality and his effect on young Lonnie. Wong Hoe was an immigrant from China and won the Oscar for cinematography for his work here. Despite his success – and considered to be one of the most influential directors of photography, he encountered discrimination in his personal life.

This is Paul Newman’s best performance. He’s arrogant, repellent and sexy. “Hud” is a classic you need to revisit. It’s essential cinema.

Homer to Hud: “You don’t care about people. You got all this charm and young people want to be like you. That’s the shame of it, cause you don’t value nothing. You don’t respect nothing. You keep no check on your appetites at all. You live just for yourself, and that makes you not fit to live with.”

Bringing “Hud” to the Screen
“Paul Newman and director Martin Ritt had worked together previously, to their mutual satisfaction, on three other films (“The Long, Hot Summer” [1958],”Paris Blues” [1961], “Hemingway’s Adventures of a Young Man” [1962]), so they decided to form a business partnership, striking a deal with major studios to produce a handful of pictures. “Hud” was to be their first effort under that new deal.

Ritt and Newman chose to adapt a novel that had been published a few years earlier, “Horseman, Pass By,” the first novel by Larry McMurtry. The story had its genesis in short stories McMurtry published in a student magazine during his undergraduate years at North Texas State College (now known as the University of North Texas). One concerned the destruction of a herd of infected cattle and another was about the death of an old rancher. Both motifs formed the bones of the novel McMurtry began writing upon graduating in 1958. The title was taken from the epitaph on the tombstone of William Butler Yeats, from Yeats’ poem “Under Ben Bulben”: “Cast a cold eye/On life, on death/Horseman, pass by!”

In the original novel the focus was on Texas ranch life seen through the eyes of the teenage character Lonnie Bannon. Hud was not the major character in the story but Ritt and Newman were attracted to the idea of building a film around the type of unrepentive character found in early Hollywood features like Clark Gable’s badass protagonist in San Francisco (1936). “For the first half of the picture, he’s a prick, and then some lady, or Spencer Tracy, or God, converts him in the second half,” Ritt noted. But in the version Ritt discussed with screenwriters (and married couple) Harriet Frank, Jr. and Irving Ravetch, Hud was not to be given even a glimmer of redemption at the end and remained an unapologetic heel, the kind of character, Ritt said, “that had not yet existed in American films.” The director and writers agreed this approach would sacrifice nothing of the original novel and actually add a new dimension to the story.” (www.tcm.com)

Casting “Hud”
“Most stars would have considered playing such an unremitting louse to be a risky career move, especially for one who was riding the crest of stardom like Newman. But the actor was eager to commit to this provocative concept because he felt that some of his recent roles, among them two screen versions of Tennessee Williams plays, “Cat on a Hot Tin Roof” (1958) and “Sweet Bird of Youth” (1962), had been compromised by censorship that softened the characterizations.

A popular leading man of the 1930s and 40s, Melvyn Douglas had mostly been away from the big screen in the 1950s, honing his reputation as a first-rate character actor on stage and television for more than a decade. His return to feature films after an 11-year hiatus commenced with “Billy Budd” (1962). He decided to follow that film with “Hud,” not only because he liked the script but because he did not have to do anything to convince Ritt he could play the role. “I could scarcely believe I was dealing with someone from Hollywood,” he later said of the director’s eagerness to cast him.

Ritt had known Patricia Neal since they both worked at the Actor’s Studio several years earlier (it was also where Ritt and Neal met Newman). He sent her the script for “Hud” with the “hope you won’t think the part is too small.” Not only did she not care about the size of the role, but Neal later said she was hooked from the first description of the character as “a tall woman, shapely, comfortable and pretty. She has an indulgent knowledge of the world, and it makes for a flat, humorous, candid manner. For the part of the young man who comes to learn that his uncle Hud is not to be admired and emulated, Ritt chose Brandon de Wilde, who had made a big impression at the age of 10 in his screen debut in “The Member of the Wedding” (1952), recreating the role he played on Broadway. The child actor followed that with an iconic role in “Shane” (1953), as the young boy who hero-worshipped the cowboy title hero, an interesting and ironic counterpoint to his part in Hud. (www.tcm.com)

About Director Martin Ritt
“Martin Ritt was born to immigrant parents in Manhattan on March 2, 1914. He graduated from DeWitt Clinton High School in the Bronx and Elon College in North Carolina, where he was a running guard and a boxer. He began studying law at St. John’s University, but he met and befriended Elia Kazan and joined him in New York’s Group Theater, where he acted in “Golden Boy” and other socially conscious Depression-era plays. He served in the Air Force in World War II, appearing in the service’s stage and film drama “Winged Victory.” After the war, he acted in live television plays but increasingly stressed directing. He was then blacklisted for five years and eked out a living by teaching at the Actors Studio. He began film directing in 1957 with “Edge of the City,” a powerfully realistic waterfront drama with racial overtones and starring John Cassavetes and Sidney Poitier…Mr. Ritt directed and occasionally co-produced 25 diverse films, including “Edge of the City,” “The Long Hot Summer,” “Hud,” “The Spy Who Came In From the Cold,” “Sounder,” “Pete ‘n’ Tillie,” “Norma Rae,” “Murphy’s Romance,” “Nuts” and “Stanley and Iris.” Most of his films were quietly moving studies of human relationships, punctuated by periodic hits that gave the husky, tough-minded director freedom to deal with social issues and the alienation of outsiders. ‘The Human Condition’

“I make the kind of films that not too many people get to make in this town, though sometimes I’ve had to take the risk myself,” he said in 1986. To make both “Sounder,” a 1972 tale of black sharecroppers during the Depression, and “Norma Rae,” a 1979 story about a struggle to unionize a cotton mill in the South, he said, he and most of the principals worked for far less than their normal salaries, in exchange for a percentage of any profits, which were ultimately considerable. An Unobtrusive Hand, Mr. Ritt directed his camera the way he directed actors, with restraint, favoring a linear, sequential technique and eschewing flashy camera angles and shots and editing. “I don’t use the zoom unless that’s the only way I can get into a scene,” he once said. “The audience shouldn’t be aware of the director’s work until the movie’s over.” (The New York Times)