Lilies of the Field 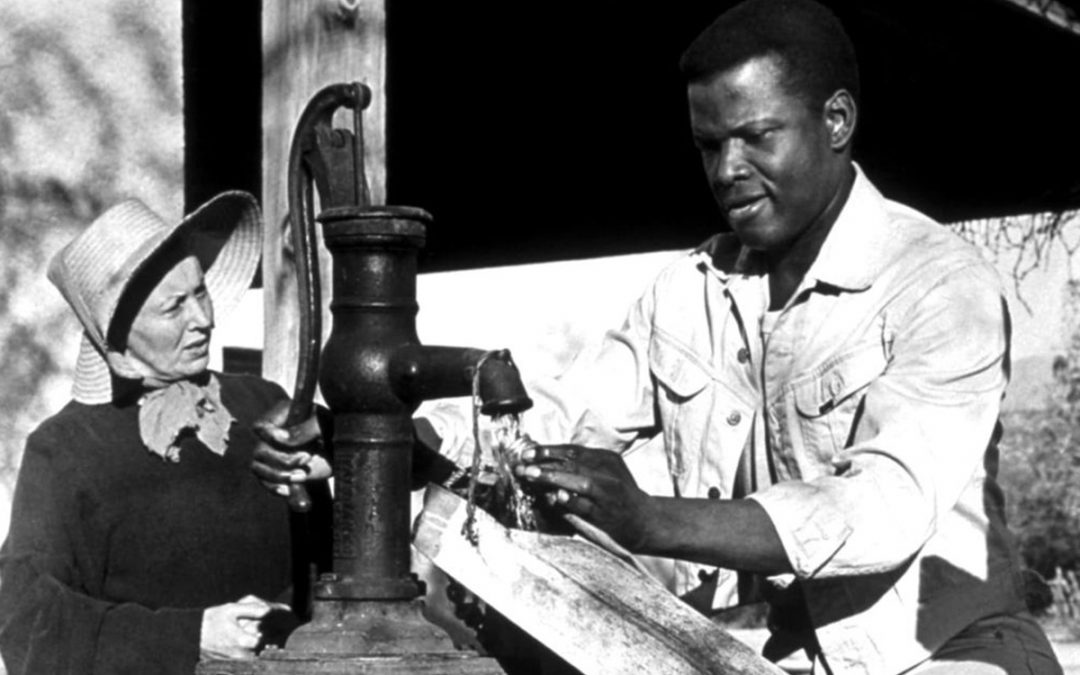 Sydney Poitier became the first African American to win the Academy Award for Best Actor in 1964 for “Lilies of the Field.” It is one of the gentlest movies I’ve seen in a long time – and I mean that in the best possible way. The film – simple and inspiring – was the perfect one to revisit. Its message of empathy, faith and trust is so needed right now.

Homer Smith (Poitier) is making his way across the West – sleeping in his station wagon. He stops to get some water at a farm from some strangely dressed women who speak German, Hungarian and Austrian. The farm obviously needs some work – and Smith (or ‘Schmidt’ as the nuns call him) is convinced by them to stay and do some minor repairs. The women turn out to be nuns – and Mother Maria Marthe – the abbess of the small convent – wants him to build them a chapel. He plans to collect his wages and get out, fast – but there’s no money nor do they have any materials. Eventually Schmidt builds the chapel. He builds it by turns as a challenge, as a duty, and finally as an act of faith.

The heart of the movie is the interactions between Poitier and the nuns. He is invited to eat with them. He doesn’t like the food and there’s not much of it – but actually their sharing of a meal warms him. The nuns don’t speak English and he embarks on teaching them – which become some delightful exchanges – moments in which Poitier shows impeccable comic timing and charm. It’s as if he were rediscovering his own language. In the evenings the nuns sing sacred music in Latin and Schmidt teaches hymns of his youth – encouraging to sing out loud. Mexican neighbors who at first seemed apprehensive of the nuns start volunteering to build the chapel, and prejudiced people of all kinds slowly overcome their attitudes.

Race is never addressed. The movie is an allegory. We’re presented with the collaboration of Eastern European refugees and an African American who are trying to build a chapel for their Latin American congregation. Schmidt is not measured by the color of his skin – but by his capabilities and intelligence. The collective decency of this group of people – led by Schmidt – builds this chapel.

Lilia Skala is wonderful as Mother Maria Marthe, and was nominated for an Academy Award as Best Supporting Actress, but the film belongs to Poitier who is just splendid.

The film could be dismissed as sentimental nonsense. It believes that there’s a good in all of us – and it’s not cynical about it. We could all use some “Lilies of the Field.”

Mr. Ashton: “Say, where’d you get all the material?”
Juan: “The people give them.”
Mr. Ashton: “What for?”
Juan: “A man, he gives wood… bricks. In time, what does he get? A chapel… a place where his children can receive the sacraments. To these men, for their children to have faith, it is important.”
Mr. Ashton: “Is that why you’re here?”
Juan: “To me, it is insurance. To me, life is here on this earth. I cannot see further, so I cannot believe further. But, if they are right about the hereafter, I have paid my insurance.”

Lilies of the Field
Available to rent on Amazon Prime, Vudu, FandangoNOW, iTunes and Microsoft.

Bringing “Lilies of the Field” to the Screen
“A story written by William Barrett, “Lilies of the Field” was first brought to the attention of Ralph Nelson by his agent, Fred Ingels. Nelson was so inspired by the slim, ninety-two-page book that his intent to bring it to the film screen became unshakeable. When United Artists would only cough up $250,000 for the entire production, Nelson put up his house as collateral in order to ensure the movie could be made. He also struck a deal with Poitier; since he would be unable to pay the actor’s salary in full, they agreed upon a profit-sharing deal with the box office returns. In terms of tenacity, Nelson had a kindred spirit in his production manager, Joe Popkin. Together they designed a shooting schedule so carefully crafted it would enable them to wrap the entire production in fourteen days.” (www.tcm.com)

Oscar History
“On April 13, 1964, Sydney Poitier becomes the first African American to win the Academy Award for Best Actor, for his role as a construction worker who helps build a chapel in “Lilies of the Field” (1963). Poitier was born in 1924, while his parents were visiting the United States from the Bahamas, where his father was a tomato farmer. As a teenager, Poitier dropped out of school and returned to America to enlist in the U.S. Army during World War II. After his military stint, he became interested in theater and applied to the American Negro Theatre in New York City. Rejected initially because of his strong island accent, Poitier trained himself in American enunciation and reapplied, this time successfully. He debuted on Broadway in 1946 in an all-black production of “Lysistrata”, and by 1950 he was appearing in Hollywood films, beginning with “No Way Out.”

By consistently refusing to play the stereotypical roles that were offered to him as a black actor, Poitier blazed a trail for himself and the performers who followed him. By the time he earned a Best Actor Oscar nomination for “The Defiant Ones” (1958), his work in such films as “The Blackboard Jungle” (1955) had made him America’s first prominent black film star. With his historic Oscar win for “Lilies of the Field,” Poitier became only the second African American to win an Academy Award. The first was Hattie McDaniel, who won in the Best Supporting Actress category in 1939 for “Gone with the Wind.” (www.history.com)

About Director Ralph Nelson
“As a teenager, Nelson had frequent run-ins with the law. He later developed an interest in acting, and he made his Broadway debut in 1934. While serving as a flight instructor for the U.S. Army Air Forces during World War II, he wrote plays that appeared on Broadway: “Army Play-by-Play” (1943) and “The Wind Is Ninety” (1945), with Kirk Douglas and Wendell Corey starring in the latter. In 1948 Nelson broke into the nascent television industry, acting on Kraft Television Theatre. Two years later he began directing, and he eventually helmed hundreds of live TV productions, many of which were critically lauded. In 1956 he directed Rod Serling’s teleplay “Requiem for a Heavyweight” for the Playhouse 90 series; it starred Jack Palance as an over-the-hill boxer who is used and manipulated by his manager. Often cited as one of the best examples of live drama performed on television, it earned Nelson an Emmy Award for his direction. He also received an Emmy nomination for his work on “The Man in the Funny Suit” (1960), which aired on the Westinghouse Desilu Playhouse.

For his first film, Nelson directed a highly acclaimed adaptation of “Requiem for a Heavyweight” (1962). “Lilies of the Field” (1963), a well-observed drama that explored issues of faith, was even more successful. It starred Sidney Poitier as a veteran whose travels around the United States are interrupted when he agrees to help a group of German nuns in Arizona build a chapel. For his performance, Poitier became the first African American to win an Academy Award for best actor, and the film was nominated for best picture. “Soldier in the Rain” (1963), an eccentric but likable military drama, starred Steve McQueen, Gleason, and Tuesday Weld. Next was “Fate Is the Hunter” (1964), a suspense film about a plane-crash investigation with Glenn Ford and Rod Taylor. In the amiable “Father Goose” (1964), Cary Grant appeared against type as a beach bum on a South Seas island during World War II. In 1966 Nelson ventured into westerns with “Duel at Diablo,” which starred James Garner and Poitier. Nelson then guided Cliff Robertson to the best-actor Oscar with “Charly” (1968), a popular expansion of Daniel Keyes’s classic science-fiction story “Flowers for Algernon.”

He also continued to explore race relations with “…tick…tick…tick” (1970), a drama about the tensions that erupt in a rural Southern town after an African American (played by Jim Brown) is elected sheriff. Nelson reteamed with Poitier on “The Wilby Conspiracy” (1975), which was set in South Africa during the apartheid era. His last two films were made-for-television productions: “Christmas Lilies of the Field,” with Billy Dee Williams in the Poitier role, and “You Can’t Go Home Again” (both 1979), an adaptation of Thomas Wolfe’s autobiographical novel.” (www.britannica.com