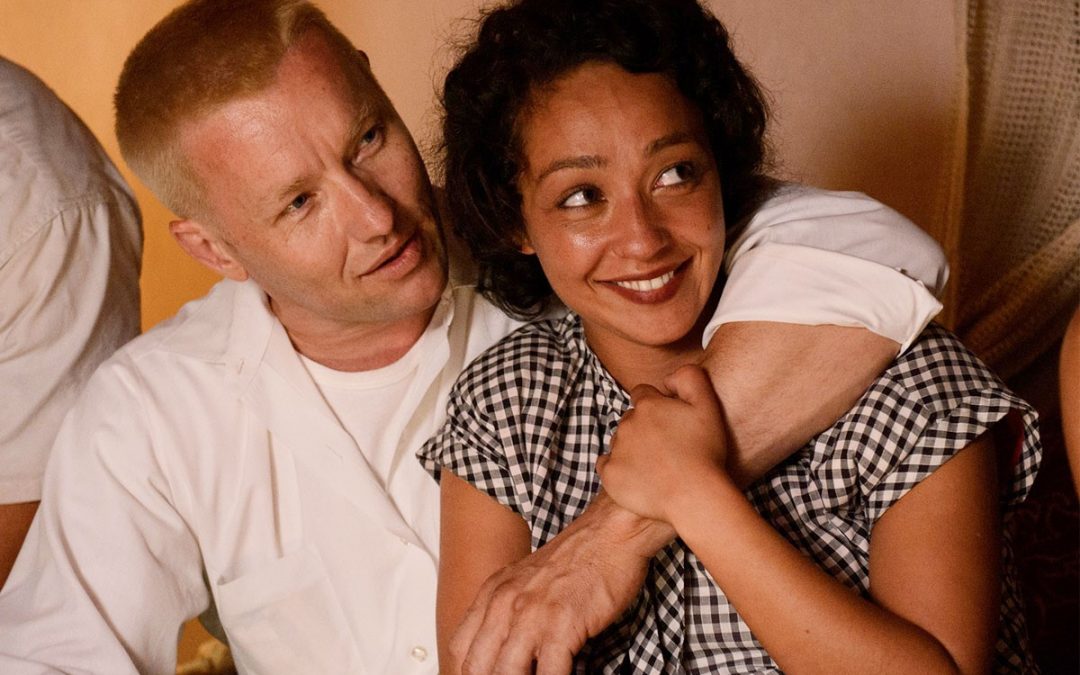 Loving v. Virginia was the landmark civil rights decision by the US Supreme Court which struck down all anti-miscegenation laws remaining in sixteen US states on June 12, 1967. The case involved Mildred Loving – a woman of color – and her white husband, Richard Loving – who were imprisoned in 1958 for getting married. Their union violated Virginia’s Racial Integrity Act of 1924 – banning marriage between people classified as “white” and people classified as “colored.” On June 12 (last Friday) we celebrate Loving Day.

I saw down last night to watch Jeff Nichols’ film on the subject – appropriately called “Loving” (2016) – and found it to be the perfect boost for these tumultuous times. This pertinent real-life story is an inspiring lesson of perseverance – a call for tolerance – and most importantly a tribute to unconditional love.

Writer/director Nichols has a singular voice as demonstrated in his previous work, “Take Shelter,” “Mud,” and “Midnight Special.” He does something revolutionary and appropriate with “Loving.” Instead of focusing on the legal proceedings, he zeroes in on the main characters’ private lives. He also takes a very understated approach – focusing on their quiet and tender everyday moments. What comes across is that the Lovings were average people caught in extraordinary circumstances. They did not set out to change the world but to remain close to one another.

I always tell my students the opening beats of a film are the most important. Nichols starts it with a shot of Mildred in close up – saying “I’m Pregnant.” It is followed by a close up of Richard, reacting, “Good, that’s real good.” Visually it feels as they’re in separate worlds. Then, Nichols follows it with a master shot – where you see them together – sitting on a porch – holding hands – and revealing their physical proximity to one another. The whole journey of the movie is distilled in that sequence – and the fact that Nichols will linger on the facial expressions of the characters. That’s where the story will be told – in the landscape of their faces.

Mildred and Richard met and lived in Caroline County, Virginia. After marrying and ending up in jail, the judge suspends their sentence as long as they don’t live in Virginia. Frustrated with raising their children away from the place they knew as home, they keep returning and breaking the law. Visually, Nichols gives the topography intrinsic value by shooting it in warm colors. When they’re briefly living in Washington – there’s a sense of claustrophobia and usage of recessive colors. There’s also a poignant focus on Richard’s trade as a construction worker – and brick layering. Bricks become an expressive symbol of steadiness. He’d promised Ruth he’d build a home for her.

After this morning’s Supreme Court ruling that gay and transgender workers are protected by law – we have a lot to be joyful for – yet there’s still a lot of work ahead of us. Mildred and Richard’s story – beautifully articulated in “Loving” – will make great company for this evening.

Mildred Loving: “We may lose the small battles, but win the big war.”

Loving
Available to stream on HBO and Hulu and to rent on Amazon Prime, Vudu, YouTube, iTunes and Google Play.

The Story of The Lovings
“In 1958, Richard Loving, a white man, and Mildred Jeter, a black woman, drove north from their home in Virginia to Washington, D.C., to get married. Upon returning to Virginia, they were dragged out of bed and arrested by the police. The Lovings’ marriage was not legally valid due to the state’s law barring interracial marriage. The ensuing legal battle upended the lives of the Lovings and their three children for almost a decade. In one fell swoop, the court’s 1967 ruling, which concluded that Virginia’s ban on interracial marriage violated both the Due Process Clause and the Equal Protection Clause of the 14th Amendment, invalidated all state laws that banned interracial marriage. These anti-miscegenation laws, as they were known, represented one of the last existing formal mechanisms for segregation, according to Virginia Tech historian Peter Wallenstein, who has written two books on the Loving case. While many states that once had such laws had repealed them by the 1960s, interracial marriage bans remained on the books in almost the entire South, even after Brown v. Board of Education in 1954 and the wave of civil rights legislation in the 1960s addressed most of the major Jim Crow laws that imposed segregation. “The ‘64 Civil Rights Act and the Voting Rights Act of ‘65 really had taken out all the formal support systems for Jim Crow segregation,” Wallenstein told the Huffington Post. “The one remaining pillar in that whole edifice ― for decades, generations, centuries ― the one remaining one was marriage. That was the last to go, and it is, of course, three years after the Civil Rights Act.”

As the film shows, the civil rights movement was what catalyzed Mildred Loving to seek legal action. She wrote to then-Attorney General Robert F. Kennedy, who referred to her to the American Civil Liberties Union. Two of the organization’s lawyers ultimately took on the case and represented the Lovings before the high court. Wallenstein noted that the fundamental nature of marriage may have been a major reason why it was one of the last remaining areas of formal segregation. “The bottom line is simply this: if white supremacy mandates maintaining a system that never accepts the prospect of blacks and whites meeting together on terms of equality, if ever there was a place where you might find just that, is marriage and the family,” he said. Indeed, one of the arguments that the state of Virginia made in justifying the ban on interracial marriage involved labeling mixed-race children as “bastards” and portraying them as harmful to society. In its unanimous ruling, the Supreme Court determined that marriage is “fundamental to our very existence and survival.” Under the 14th Amendment, “the freedom of choice to marry not be restricted by invidious racial discriminations,” Chief Justice Earl Warren wrote in the opinion. “Under our Constitution, the freedom to marry, or not marry, a person of another race resides with the individual, and cannot be infringed by the State.” Beyond marriage, the Loving case also had important legal ramifications for property and child custody cases involving interracial couples, Wallenstein noted.” (The Huffington Post)

Ruth Negga on Playing Mildred Loving
In an interview with IndieWire, Ruth Negga discussed playing the role of Mildred Loving. “I’ve always had sort of an interest in American history, full stop, and especially people who contributed to the civil rights struggle,” Negga shared. “I came across an article about Peggy, Mildred’s daughter. I thought, ‘What? I’ve never heard of these people? Who are they?’” Negga’s interest in the Lovings eventually turned into one of those spiraling Internet searches that only lead her to more intriguing information, including a watch of Nancy Buirski’s 2011 documentary, “The Loving Story.” “I went searching,” she remembered. “I was like, ‘These two are incredible. This couple is extraordinary. All the more extraordinary for their ordinariness, and look what they managed to achieve.’” The actress sparked swiftly to the couple’s obvious love and affection, finding an inspirational romance at the heart of one of the world’s most publicized legal cases. “Like most people who watch the documentary, [it was] immediate love at first sight with this couple,” she said. “The energy and the space between them is so potent and vibrant and lovely and just tender and shy. It’s lovely to see that sort of joyful innocence really, isn’t it, sometimes?” “I thought, ‘When I grow up, I want to be like this couple,’” she added. That eventually became one of the driving forces behind both her performance and the film itself, and one she knows audiences are already reacting to in a major way. “I think a lot of people are responding to the love story because they are like, ‘Wow, I want that. Whatever they are, whatever that was, please, dear God, let me taste that in my lifetime,’” she said. “I think that’s why it resonates.” But while Negga was enthralled by the Lovings and their very special relationship, she was particularly invested in Mildred and the unique spirit that helped drive her during some of the Lovings’ darkest moments. “It was Mildred’s tenacity and perseverance,” Negga said firmly. And who wouldn’t want to play that sort of role?” (IndieWire)

Nichols on the Making of Loving
“I felt like I had a fairly good grasp of civil rights knowledge, but this is one that’s been left in the background. We’re talking about the bedroom, and also there weren’t any bombings or marches, no one dies, and those don’t always catch the headlines.” This big screen account began with another film-maker, Nancy Buirski, who read Mildred Loving’s obituary in 2008 and spent the next four years making a thorough documentary, The Loving Story. It was seen by actor Colin Firth and his production partner, who approached Nichols to dramatise the story…Much of what the Lovings do say was transcribed verbatim from archive material. There is no courtroom showdown. “They didn’t go, so we don’t go,” says Nichols. Instead, we see the lawyer asking Richard Loving if there’s anything he wants to tell the supreme court justices. He replies: “Tell the judge I love my wife.”… The Lovings were mostly apolitical. They were not activists. They didn’t want to be martyrs. They just wanted to be allowed to live together, and yet they effected a massive change in American society. “And that’s a great thing to be reminded of,” says Nichols, “especially in a climate where we feel the movements in society are being made by big political machinery. People made a difference here. Individuals.” (The Guardian)

About Writer and Director Jeff Nichols
“Born and raised in Little Rock, Arkansas, Jeff has been described by frequent collaborator Michael Shannon as a “smart redneck, which is a rarefied breed”. A teenage punk rock drummer turned auteur filmmaker, Jeff is one of America’s most exciting new voices working in film today. His first film, Shotgun Stories garnered several festival awards including the FIPRESCI International Jury Prize at the 2007 Viennale. His next, Take Shelter opened to great critical acclaim and won, amongst other awards, the SACD Award for Best Feature at the 2011 Cannes Film Festival. The film was also nominated for five 2012 Film Independent Spirit Awards including Best Director. Mud, Nichols’ third film premiered in main competition at the 2012 Cannes Film Festival and had its North American premiere at the 2013 Sundance Film Festival. It was awarded the prestigious Robert Altman Award for the 2014 Film Independent Spirit Awards. His most recent feature, Loving, was ‘In Competition’ at last year’s Cannes Film Festival and his leading lady, Ruth Negga was nominated for an Oscar for her performance. In 2016 Jeff directed his first commercial film project for Procter & Gamble, ‘Strong’ which was incredibly well received and has garnered nearly 50 million YouTube views to date.” (www.rattlingstick.com)