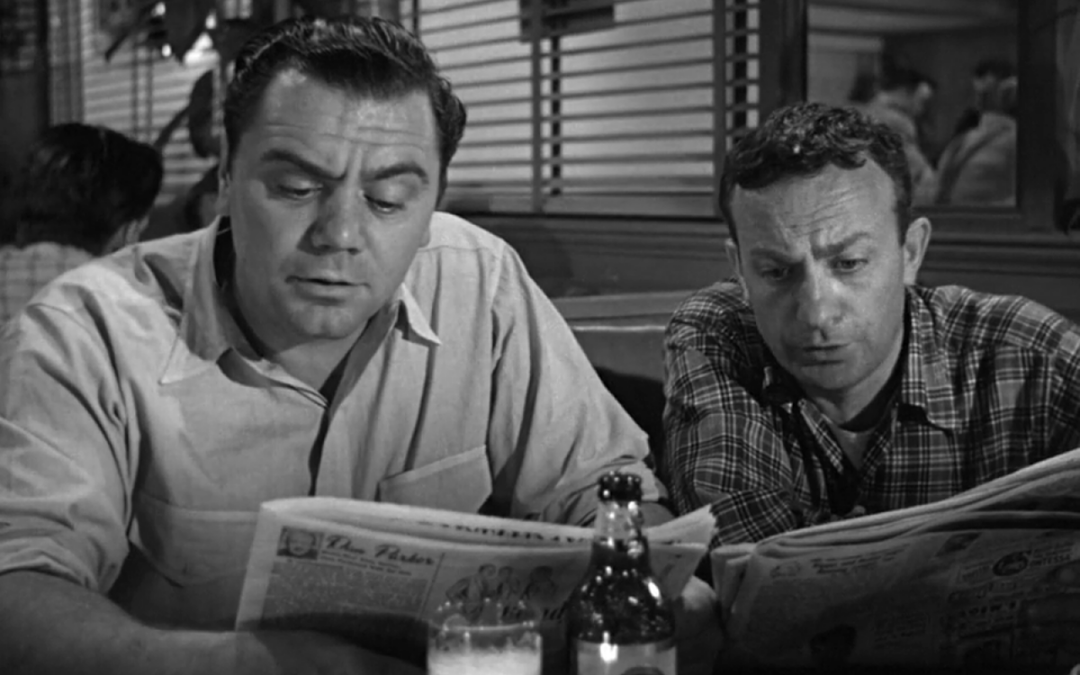 “I cry a lot too. I’m a big crier…I cry all the time. Any little thing. All my brothers, my brothers-in-law – they’re – they’re always telling me what a good-hearted guy I am. You don’t get to be good-hearted by accident. You get kicked around long enough, you get to be a – a real professor of pain.”

“Marty” (1955) has always had a special place in my heart. It is the story of two ordinary people who fall in love just about the time they’ve almost given up hope of ever finding it. The film won the Oscars for Best Picture, Best Director, Best Actor for Ernest Borgnine, and Best Screenplay for Paddy Chayefsky, who is the only writer to have won three solo screenplay Oscars. He won for “The Hospital” (1971) and for perhaps one of the best scripts ever, the freshly prescient “Network” (1976). With “Marty,” which started as a television production starring Rod Steiger, he gives us an intimate, realistic look at the Italian working class in New York City.

“I’ve been looking for a girl every Saturday night of my life. I’m thirty-four years old,” says Marty. “I’m just tired of looking, that’s all. I’d like to find a girl.” Chayefsky wanted to write a love story where the hero wasn’t handsome, and the characters were like the people he knew growing up in The Bronx. He got the inspiration while rehearsing a teleplay at a ballroom where he noticed a sign that said, “Girls, Dance With the Man Who Asks You. Remember, Men Have Feelings, Too.” There’s poetry in the dialogue of these everyday people in this small opera of feelings. There are moments in which you start seeing beauty amongst the mundane. Like when Marty is suddenly hit with the rush of love and is waiting at the bus to stop and then whacks the sign with delight and decides to treat himself instead to a taxi home, rushing into oncoming traffic and grinning to the heavens. He’s almost ready to burst into song.

“I’m just a fat ugly man!” says Marty the butcher to his mother, his frustration reaching a boiling point when he’s confronted with the neighbors’ constant nagging him about not being married. The loneliness in him is palpable as he sits at a cafe with Ange, his best friend, trying to figure out what to do on a Saturday night. They have an absurdist exchange in which they repeat to each other, “What do you feel like doing?” It’s clear they have had this conversation many a time. They’re like Vladimir and Estragon waiting for Godot or at least for something interesting to happen in their monotonous lives. Since they’re both bachelors they’ve become each other’s primary relationship.

At home, his mother Theresa is confronted with a different type of existential crisis. Her sister Catherine’s recently married son wants her out of the house, and wants her to come live with Theresa and Marty. Catherine points out to Theresa the fate of widows when children marry. “These are terrible years, Theresa, terrible years,” she says. “…It’s gonna happen to you. It’s gonna happen to you! What are you gonna do if Marty gets married? Huh”

Feeling pressured to go out on a Saturday night, Marty heeds his mother’s advice and goes to the Stardust Dance Hall. There, after a sad set of occurrences, he meets a lonely twenty nine year old schoolteacher, who, like Marty, has had her hope shattered too many times. It is at this point that the script, the directing and the acting become so poignant. After dancing, Clara and Marty decide to go out for a walk and a cup of coffee. Through their conversation we start to see a glimmer of optimism and trust. Clara is played beautifully by Betsy Blair who had been blacklisted and campaigned hard to get the part. Borgnine, stocky, and gap-toothed, slowly starts to blossom in front of our eyes. He’s a sweet galoot with a heart as big as Manhattan. He’d been monosyllabic until meeting Clara. “Well, there I go again. I must be driving you crazy,” he says, surprised at the words coming out of his mouth. “Most of the time when I’m with a girl I can’t find a word to say. Well, I’m gonna shut up now and let you get a word in…there I go again.”

But Marty’s mother and his friend Ange dismiss the relationship for selfish reasons and plant doubts in his mind. Both of them would have to deal with their aloneness if Marty’s affair with Clara were to succeed.

In his feature film directing debut, Delbert Mann emphasizes the claustrophobia of their environment. He allows it to open up by the time we get to the ballroom and their walk through New York city. The evocative black and white cinematography is by Joseph LaShelle, who was known for classic film noirs (he won the Oscar for 1944’s ‘Laura”) and for his terrific work in Billy Wilder’s“ The Apartment” (1960).