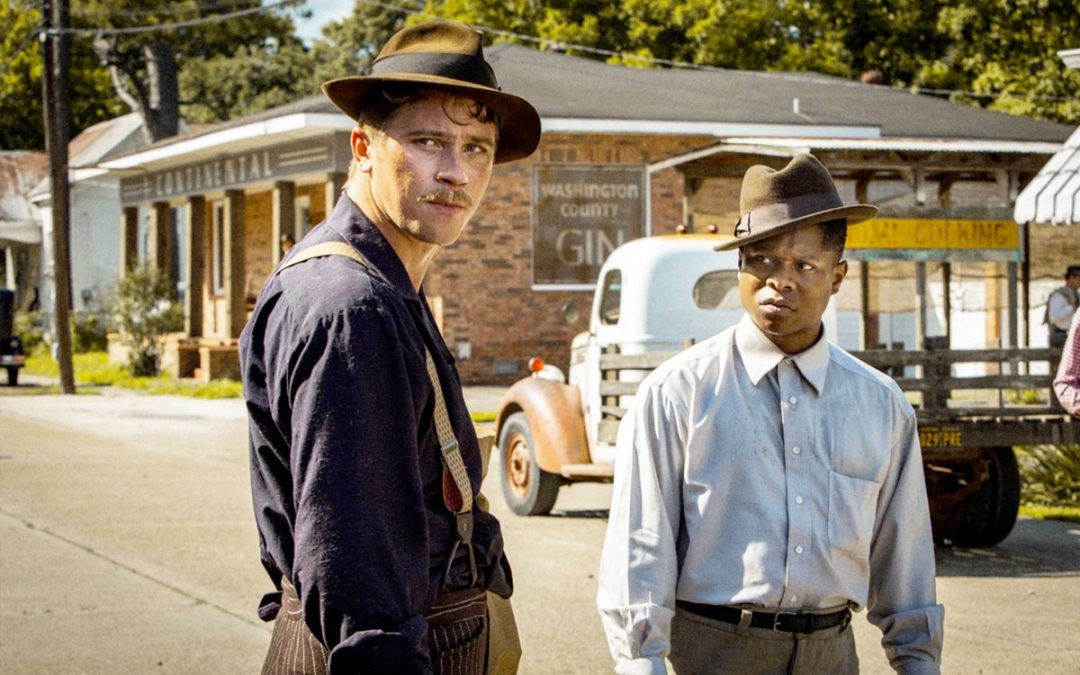 Those are words spoken by black sharecropper Hap – one of the many characters we follow in the spellbinding “Mudbound” – directed and co-written by Dee Rees. Her ambitious and deeply engrossing film is ultimately about the heart of this country. Each character represents one of us. The film articulates – through allegory and a story that takes place in a not so distant bygone time (Mississippi Delta 1940s) – the big divide that we’re currently grappling with. By adapting the bestselling novel by Hillary Jordan, Rees proves herself to be one of the most important voices in cinema today. I marvel at how movies have so much to teach us about our existing events – and in Rees’ deep perspicacity – she takes us to our past so that we can understand our present.

Set in the rural American South during World War II, “Mudbound” depicts two families, one white and the other black – who are bound to each other by a piece of farmland. There are the Jacksons – Florence and Hap and kids – who have worked the land for years – and long for the day they can own a “deed.” Their dreams are upended by the arrival of the McAllans – Henry, Laura and their racist Pappy – who move from Memphis and have no experience farming. Rees’ splinters the narration – giving us several individual points of view. Instead of confusing us – it makes the point that all these disparate characters are intricately connected to one another.

Symmetrically, each family has one member who gets sent to the War. Poetically, Ronsell Jackson fights on the ground – manning a tank while Henry’s brother, Jamie McAllan – fights in the skies. After their return from War – their friendship will be the catalyst for the collision of the two families. In Germany, Ronsell’s race was not an issue. Upon his return he’s immediately confronted with racism and bigotry. “Went to fight for my country to come back and find it hadn’t changed a bit.”

As a filmmaker, Rees is a poet. Scene upon scene – there are rich visuals and metaphors. The opening sequence is a gorgeous example. The two McAllan brothers are digging a grave and there’s rain and mud enveloping them. In their digging, they stumbled upon a skull. It’s the grave of a slave – for there’s a shot in the head. The sins of the land – the sins of the past – are actually drowning them.

The performances are all excellent. This is a terrific ensemble. Carey Mulligan and Jason Clarke lead the McAllan family – and Mulligan does some of her best work. Jason Mitchell who was so captivating in “Straight Outta Compton” – is equally memorable here as Ronsell. Rob Morgan is heartbreaking as Hap – his father. Mary J. Blige is the standout as Florence. Deservedly she was nominated for the Oscar as Best Supporting Actress and for the original song – “Mighty River” that is used for the end credits.

In it she pleads,
“White flag in hand
I don’t want to fight
No lines in the sand, I’m on your side.
Invisible, no color life
It’s time we put our, put our, put our differences aside.”

Mudbound
Available to stream on Netflix.

The Idea of Mudbound
In an interview with Film Comment, Dee Rees talks about what drew her to the material. She had this to say. “Back in 2015, [producer] Cassian Elwes brought the script, originally written by Virgil Williams, to my attention, and I was taken by how the narrative was told from several points of view.” She goes on to say, “I really wanted to get into the Jackson family, because when we’re with a character [in the script] we’re truly seeing the world through their eyes. That’s what I really wanted to play up. That was one of the exciting things about it for me.” American cinema is hardly overburdened with layered historical narratives told from an African-American perspective, and I saw an opportunity to engage with history on a personal level, tracing a line from Ronsel to my own family. “My maternal grandfather was a veteran of World War II and my paternal grandfather went to Korea—so different eras, and different kinds of battles. But I was struck by the fact that they were considered more American when they were overseas than they were in the States. I wanted to get into the theme of the battle abroad versus the battle at home, which was even bloodier.”

Rees plumbed family history for other aspects of the film. “My grandmother grew up in the small town of Ferriday in Louisiana,” said Rees. “She was born in 1925, and she’d talk about riding on her mother’s cotton sack. They owned their land, but they farmed it, and her parents cultivated cotton. She decided early on that she didn’t want to do that, nor did she want to be a domestic. She said she wanted to be a stenographer, so that was a touch I added in the film, when the Jacksons’ daughter declares her career ambition. In [Hillary Jordan’s] book, she can sing, but I didn’t want it to be the typical ‘little black girl can sing’ thing. I found it more interesting that she had this other ambition.” (filmcomment.com)

The Mud
There was the ever-present oppressive Louisiana heat. And humidity. And pesky mosquitos. And always the mud. Sometimes, it was caused by the thunderstorms that would sweep through, without warning, in the afternoons. Sometimes it was created by the rain towers used to ensure muddy continuity when the sun baked the dirt dry. But always that mud — quite real and metaphoric.

“It doesn’t matter what color, what creed, what gender, what religion you are — we’re all trapped in the mud,” says Virgil Williams, who adapted Hillary Jordan’s 2008 novel Mudbound for the screen. “It’s the mud of fear, the mud of ignorance, the mud of hate, and the only way out of it is with love.”

Even as Dee Rees was filming Mudbound in the summer of 2016, that hate was evident across the nation as the presidential election heated up and various judicial proceedings played out — like some distant thunder. The director recalls one day when the schedule called for her to shoot a scene of the young kids in the film playing at war, and news had just broken that another cop had been acquitted for shooting a black man. “I was so pissed off,” recalls Rees. “That was something that had been in the background for years, and it was definitely felt on the set.” (hollywoodreporter.com)

About Writer and Director Dee Rees
Dee Rees was born in Nashville, Tennessee, on February 7, 1977. She is known for her feature films Pariah, Bessie, Mudbound and The Last Thing He Wanted. Rees has also written and directed episodes for television series including Empire, When We Rise, and Philip K. Dick’s Electric Dreams.

Pariah, completed in 2007, screened at over 40 festivals worldwide (including Sundance) and garnered 25 Best Short awards. Additionally, Pariah was a finalist for the 2009 Sundance/NHK International Award. Rees was also selected as a 2008 Tribeca Institute/Renew Media Arts Fellow for her work; was chosen as one of Filmmaker Magazine’s “25 New Faces of Independent Film” for 2008; and was nominated for a USA Fellowship in 2009.

Pariah has since been expanded into the feature length film Pariah, which had its world premiere at the 2011 Sundance Film Festival. It was honored with the Festival’s Excellence in Cinematography Award.

She previously worked as a script supervision intern on Spike Lee’s epic documentary When the Levees Broke and feature Inside Man. At Tisch, Spike Lee was Rees professor and mentor. She earned a Master’s Degree in Business Administration from Florida A&M University.

In 2018, Dee became the the first black woman to be nominated for any Academy Award in a writing category and the first Black woman nominated for an Oscar in the Best Adapted Screenplay category for her highly-acclaimed film Mudbound. After being shown at Sundance in 2017, Mudbound became the highest purchase of the festival, being bought for $12.5 million by Netflix.

Most recently, Rees directed The Last Thing He Wanted, a political thriller film based upon the novel of the same name by Joan Didion. (allamericanspeakers.com)