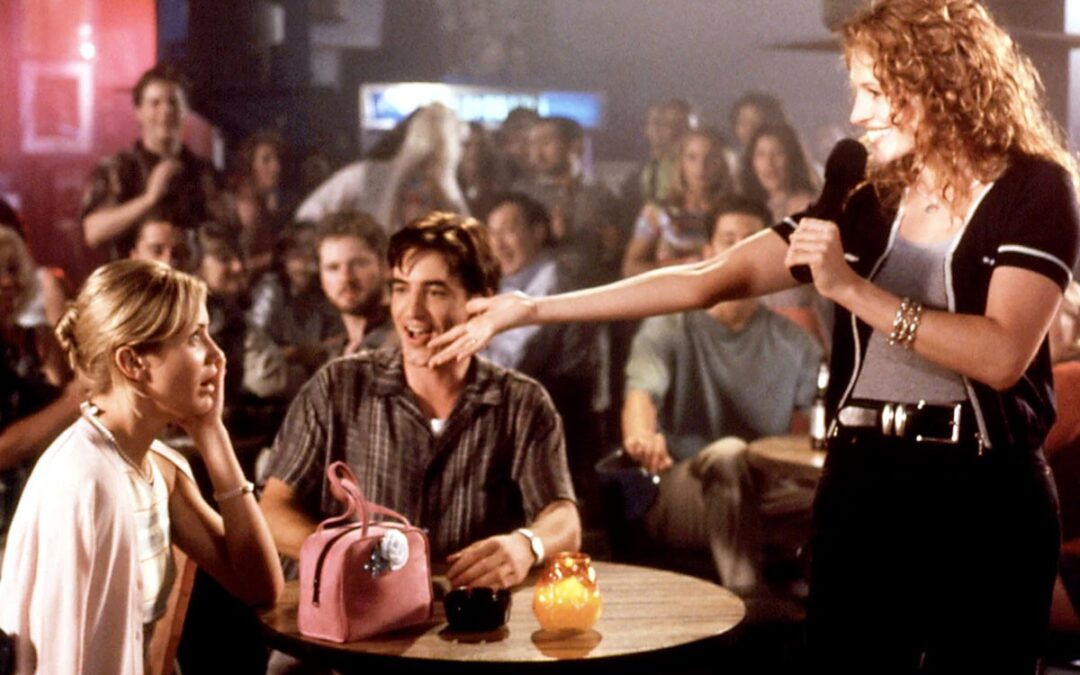 “It’s amazing the clarity that comes with psychotic jealousy,” George comments about our leading lady in the insubordinate romantic comedy “My Best Friend’s Wedding” (1997). There are times during this big studio release starring America’s sweetheart, Julia Roberts, when we witness the main character follow her worst impulses – and we relish in it. She is out of control, delusional, obstinate and selfish. Yes! We’ve all thought about doing some of the things that she does, but we would never act on it. The film pulls the rug from underneath us in several occasions subverting the genre (girl does not get boy) and making some nifty commentary about love and friendship along the way. It’s very funny, not mushy – and besides, any movie that uses well a slew of Burt Bacharach songs as an essential part of its narrative steals my hard-to-please heart.

Nine years ago, after breaking up, Julianne made a pact with former flame and now best friend Michael that if they hadn’t betrothed by the time they’re 28, they will marry each other. She’s about three weeks away from the date when she gets a phone call asking her to be a guest at his wedding to Kimmy – a student at the University of Chicago and the heiress to the Chicago White Sox. Julianne is a successful and feared New York food critic who has a primary relationship with George — who is witty, attractive, supportive, but sexually unattainable. Julianne is invited to the long wedding weekend and since she is considered a threat to the bride, she’s asked to be the maid of honor. Keep your enemies close, I guess. “I’m a busy girl. I’ve got exactly four days to break up a wedding, steal the bride’s fella, and I haven’t one clue how to do it,” she exclaims to our vicarious delight. Kimmy is not what we expect. She’s endearing, sensitive and attractive – and a perfect match for Michael. Following her worst judgement, Julianne will scheme to sabotage Michael – a sports writer – and Kimmy’s chance at happiness. So what we have is a love rectangle – and the character who sets the plot in motion is unhinged.

Even during the opening credits, things are askew. We get a choreographed opening number of a bride and her bridesmaids on a bright pink backdrop singing Bacharach’s “Wishin’ and Hopin’” – as if we’d dropped in a 1950’s rom-com instead. The song is performed full of delicious irony by Ani Di Franco. Half-way through the film, George will get his turn to puckishly comment “I knew some day we would end up like this – like some glittering Rock Hudson-Doris Day extravaganza.” George is the most fascinating character – and a very subversive ingredient to this formula. In classic screwball comedies like “My Man Godfrey” and “The Palm Beach Story” we’ve had the comic relief, effeminate admirer of the main character who we know will eventually be replaced. George is gay and comfortable with who he is and is – refreshingly – the moral compass. He is the true love relationship that Julianne will evolve towards. It’s a modern world.

Aussie director P.J. Hogan made an international splash in 1995 with “Muriel’s Wedding” that was a breakout for Toni Collette. He dexterously walks the fine line between comedy and despair in the tale of an awkward duckling who finds consolation in the songs of ABBA and her own footing. Some of the same quirky and acerbic qualities are found in his American debut, and both heroines share a determination to find happiness that keeps us rooting for them. The fact that in Ronald Bass’ clever screenplay, Julianne has a deadline only adds to the manic urgency. There’s enough compassion and good will to win us over. There are some unexpected detours that are irresistible – like George breaking into an improvised singing of “I Say a Little Prayer” at a rehearsal dinner joined in the background by waiters with lobster claws swaying to the music. For this Bacharach fan, “What the World Needs Now” will appropriately play in the climactic scene.

Julia Roberts’ charisma makes us root for the questionable character of Julianne. The actress had taken a detour to serious dramas like “Michael Collins” and “Mary Reilly” that had been commercial failures. This role proved to be a welcomed return to form. There’s no denying the wattage in that smile of hers — or the infectiousness of her laughter. Cameron Diaz is a perfect opponent. There’s a terrific scene where Julianne forces her to sing karaoke in order to embarrass her. Diaz goes embarrassingly for broke and wins us over. As the object of their affection, Dermot Mulroney is bland but serviceable. The real chemistry is between Roberts and Rupert Everett as George. We miss him when he’s not on screen. There are some notable small parts by soon-to-be Academy Award nominees Rachel Griffiths and Paul Giamatti.

Screenwriter Ronald Bass on “My Best Friend’s Wedding”
“I just knew it was going to be a hit,” says the movie’s writer Ron Bass of the ending we all know and love, where Roberts’ character Julianne receives a phone call from Rupert Everett’s George and discovers he’s shown up at the wedding to ensure she’s okay. “It was so funny, it was heartfelt, it was so contemporary. It was so against expectation. It was so wonderfully cast.” However, it was not originally the one in which Julianne’s story ended. The movie included a scene where Julianne meets another man at the reception in the final moments so that the flick wouldn’t end on a downer. But at a preview screening “the entire audience just goes dead; they hated it,” says Bass. “So all the credit we got with the audience for not getting the guy, we lost in that moment where another guy steps up.” Luckily, the filmmakers had time to fix it and the very next day they got to re-writing and adding new scenes throughout the movie, including the ending with George. “One of the biggest reasons that I wrote the piece was to make the point that love is love,” says Bass. “The person in the world that she loved the most and that loved her the most was her best friend.” Well, her other best friend. (ew.com)

The Making of “My Best Friend’s Wedding”
Hogan revealed that just about every aspect of the scene was shot live (as in, Diaz really stood up in front of an entire crowd of people and sang). “Cameron just botched her way through the song,” he said. “And the worse she got, the better the scene was. But then Cameron was so game that the applause started to become real.” Diaz added that while she was “terrified” to film the scene, she kept her focus on Mulroney, who silently coached her through it all. “I was terrified to do that scene, for real. I allowed the true terror of singing in front of people to be alive in me,” Diaz revealed. “I wanted to run and hide, and Dermot kept me there. He said, ‘You can do it, you can do it.’ In the scene I’m just staring at him the whole time because he’s looking at me like, ‘You’re okay. You’re not gonna die.’ And I was like, ‘But I’m dying.'”

Speaking with EW, director P.J. Hogan explained that they staged the filming of the scene as a “real karaoke song, where the lyrics appear in front of you on all the monitors.” They shot it live and “Cameron just botched her way through the song, and the worse she got, the better the scene was,” he said. Diaz added: I was terrified to do that scene, for real. I allowed the true terror of singing in front of people to be alive in me. I wanted to run and hide, and Dermot kept me there. He said, “You can do it, you can do it.” In the scene I’m just staring at him the whole time because he’s looking at me like, “You’re okay. You’re not gonna die.” And I was like, “But I’m dying.” Everett, who was not in the scene, told EW that Diaz was able to take the moment from ridiculous to “suddenly being incredibly moving” — and pointed out that it made Michael and Kimmy “fall in love more” and Julianne become more “isolated” in her plotting to ruin the relationship. (thecut.com)

The Music of “My Best Friend’s Wedding”
”Music gets all your senses going at once,” says Bonnie Greenberg, the film’s music supervisor. ”These days, movie music is about selling records, not the extra level of emotion it brings.” Diaz’s karaoke scene is beautiful and anguished. ”Cameron had been practicing [her lip-synching],” recalls Greenberg, ”but P.J. decided it would be better to see if she could sing it live, then she’d be embarrassed, like her character.” As for the ”I Say a Little Prayer” scene? Greenberg says Hogan took no chances. In a sound studio, where the music was recorded before filming began, ”he sat everyone around a table and actually directed the scene in his head as we were recording…. P.J. has an incredible eye and ear for these numbers. He’d do an incredible job with an actual musical.” (ew.com

About Director P.J. Hogan
PJ Hogan graduated from the Australian Film, Television and Radio School, where he wrote, directed and edited the short film GETTING WET. The film went on to win two Australian Film Institute awards including Best Short Fiction. In 1986, he directed and co-wrote THE HUMPTY DUMPTY MAN, a film for television. In 1991, he was second unit director and script editor on the acclaimed feature film, PROOF, written & directed by his wife Jocelyn Moorhouse. In 1994 he wrote and directed his first feature film, MURIEL’S WEDDING which premiered at Cannes Film Festival in Director’s Fortnight, received 11 Australian Film Institute Award nominations going on to win Best Achievement in Direction, Best Film, Best Actress, Best Supporting Actress and Best Achievement in Sound. In 1996 PJ directed MY BEST FRIEND’S WEDDING starring Julia Roberts and Rupert Everett; in 2001 he co-wrote and directed UNCONDITIONAL LOVE, in 2003 he wrote and directed a live-action version of PETER PAN, based on the J.M Barrie book; in 2009 he directed CONFESSIONS OF A SHOPAHOLIC starring Isla Fisher, John Goodman, Joan Cusack & Lynn Redgrave and in 2012 he wrote and directed MENTAL which premiered at the Melbourne International Film Festival. In 2014 PJ co-wrote THE DRESSMAKER with Jocelyn Moorhouse, and was an Executive Producer, as well as 2nd Unit Director, on the movie. PJ adapted MURIEL’S WEDDING in to a stage musical which premiered at Sydney Theatre Company in 2017. (hlamgt.com.au)