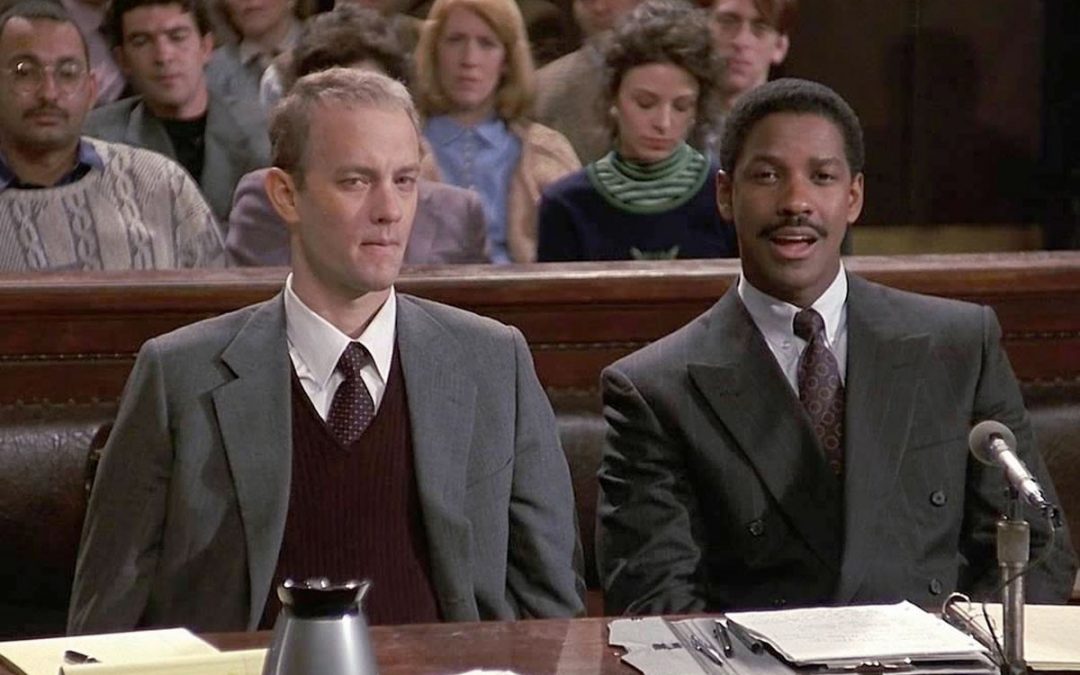 25 years ago, I couldn’t appreciate “Philadelphia.” I’d had too many close friends of mine die of AIDS – and there was so much homophobia and misinformation. As I watched the film, I appreciated the effort yet I had been wanting so much more. I was irate – and heartbroken – for I felt that this movie was too pat – too sanitized – too safe. Couldn’t it be an angrier film that captured the emotions that all of us were undergoing? I broke the number one rule I have for my students when we’re watching a film. What did you see? What did you experience? I urge them to judge what’s on the screen – not what they wish they would see.

I sat last night to see “Philadelphia” – the first time I’d seen it since it came out – and it’s an incredibly moving and ardent film – and now I fully understand and embrace the choices it made. What seemed to me as compromises – they were bold moves to get the movie made, reach audiences and get the conversation going – for change and understanding. This was the first film from a major studio to deal with the AIDS crisis directly. Director Jonathan Demme – after sweeping the Oscars the year before with “Silence of the Lambs” could get anything done that he wanted – and he put his efforts behind this subject. By the time the movie opened – close to ¼ million people had died of the disease. “Philadelphia” stands as an impassioned paean to open-mindedness and fair justice – and given the fact that we’re currently going through a pandemic – and that last week, the Supreme court ruled that federal law protects gay and lesbian and transgender workers – the film’s just as vital as ever.

Andrew Beckett (Tom Hanks in his first Best Actor Oscar performance) is a successful lawyer for one of the best law firms in Philadelphia. He’s lived a compartmentalized life – and has kept his homosexuality away from his homophobic boss – Charles Wheeler (two time Oscar winner Jason Robards.) After Andrew is assigned the most important case of the firm, he starts showing lesions associated with AIDS – and he’s unceremoniously fired. He cannot get anyone to handle his wrongful termination case – and out of desperation hires ambulance chaser – Joe Miller (Denzel Washington.) The latter is also homophobic yet takes the case for money. Most of the audience that saw the film when it was first released – may have had the apprehension and fears manifested by Denzel Washington’s character. As he develops compassion for Andrew’s plight – so does the audience. The importance of the fact that Miller is African American cannot be overstated. He too has faced marginalization – and their solidarity is what makes this film exceptionally poignant today.

Demme keeps it simple – yet includes moments of flourish that add expressiveness. Notice the way he makes characters face the camera directly – locking eyes with you – connecting with you – and he keeps the main characters in close up. His choice of angles in pivotal moments is worth observing as well. As Andrew takes the stand and listens to the defense attorney – dramatically it turns to oblique angles. Cinematically – the highlight is the scene where Andrew speaks to Joe about opera and plays Maria Callas. The camera swirls above him and the lighting gets heightened. Yes, Tom Hanks is fantastic. This time around Denzel stood out more. He adds so much pathos.

This is deeply moving film – full of humanity. Plus who can ever forget Bruce Springsteen’s heartbreaking theme?

Joe Miller: “ We’re standing here in Philadelphia, the, uh, city of brotherly love, the birthplace of freedom, where the, uh, founding fathers authored the Declaration of Independence, and I don’t recall that glorious document saying anything about all straight men are created equal. I believe it says all men are created equal.”

Philadelphia
Available to stream on Netflix and to rent on Amazon Prime, iTunes, Vudu, YouTube, Google Play and Microsoft.

Bringing “Philadelphia” to the Screen
In an interview with Rolling Stone, director Jonathan Demme discusses his decision to make “Philadelphia.” “My friend Juan Botas became sick. Juan was my wife Joanne’s soul mate. They had the kind of friendship that was completely without restraint. Juan and I also became good friends – you can see him in his documentary, One Foot on a Banana Peel. So when Juan said that he was HIV positive, I reacted in the only positive way I could, which was to try to work somehow. I talked to my partner Ed Saxon, who was very keen on the idea, and also to Ron Nyswaner, who had done the shooting script for Swing Shift – a wonderful writer. That Ron was gay didn’t hurt. Anyway, the desire to do a film on AIDS was born of Juan’s sickness. We looked for a story for a long time, and we decided it would be pointless to make a film for people with AIDS. Or for their loved ones. They don’t need no movie about AIDS. They live the truth. We wanted to reach people who don’t know people with AIDS, who look down on people with AIDS. When I read in the papers that “Philadelphia” was “targeted for the malls,” part of me goes, “Oh, my God, that sounds so calculated.” But we were calculated about it. We calculated what audience we aspired to.

We started off with angrier scripts, very politicized. Scripts that were informed with the rage I felt when confronted with society’s not only indifference but hostility to my sick, courageous friend. Ron and I were pissed, and we were not only aggressive, we were assaultive. There was a desire to just, like, stick AIDS in your face and say, “Look at it, you scumbags.” If your immune system is imperiled, the best way to stay alive is to strive for as much serenity as possible–stress is debilitating and will hasten the onslaught of the illness. We made a choice to get spiritual. We had scenes of Tom meditating to tapes, things like that. We felt this guy is so committed to staying alive, at least long enough to see his name vindicated, he is going to identify rage as a wasted emotion. Maybe we went a little too far on that side. I find it admirable that he isn’t more actively angry. The whole time we’re talking, though, I keep picturing ACT-UP demonstrations–and I admire that, too. People who are afflicted with this disease are entitled to all the anger they feel like venting. Our choice for this particular guy was he was going to avoid rage.” (Rolling Stone)

Casting the Role of Andrew Beckett
“A lot of wonderful actors wanted to play Andrew,” Demme recalled in the 2003 documentary “People Like Us: Making Philadelphia.” “I got a phone-call one day from Tom’s high-powered Hollywood agent – ‘Tom has asked me to call you to let you know he wanted to throw his hat in the ring for Andrew Beckett’.” Hanks had become frustrated with the lightweight parts flowing his way. Twenty years before Matthew McConaughey begat the “McConaissance” by instructing his advisors to say “no” to every rom-com that came through the door, Hanks had pulled the emergency brake in similar fashion. “Philadelphia” represented the first flowering of the Hank-aissance. “At one point in my mid-thirties when I was making an awful lot of movies about the goofy headed guy who can’t get laid, I realised then that I had to start saying a very very difficult word to people, which was no,” Hanks would recall. “Saying yes, then you just work. But saying no means you made the choice of the type of story you wanted to tell and the type of character you want to play.” Demme’s plan was for Andrew Beckett to be sympathetic to mainstream audiences, who might have never met a gay person let alone possess a nuanced understanding of Aids. Hanks, for his part, saw something of himself in the character. Beckett was a regular guy, personable but who also just happened to be gay and dying of Aids. “I recognised him,” he said. “I saw myself there – a non-threatening, passionate, competitive guy.” (https://www.independent.co.uk)

About Director Jonathan Demme
“Jonathan Demme was born in Baldwin, Long Island. Demme was educated at the University of Florida, where he became a film critic on the college newspaper. Demme met Roger Corman while working in London on publicity for the war film “Von Richthofen and Brown” (1971), and was soon recruited into the stable of writer-directors that had already spawned Francis Ford Coppola and Peter Bogdanovich. He shot one scene of the sex film “Secrets of a Door-to-Door Salesman” (1973) and wrote assorted scripts for Corman. Demme made his major studio debut with “Handle With Care” (1977). His film, “The Silence of the Lambs” was only the third in history to win all five major Oscars; it made more than $240m worldwide and its influence was strongly felt on the thriller genre, Aside from his fiction work, Demme was an accomplished documentary maker whose subjects ranged from family (his cousin, an Episcopalian minister, in the 1992 Cousin Bobby) to musicians (Robyn Hitchcock, Neil Young, Justin Timberlake) and politicians (Jimmy Carter in the 2007 “Man From Plains”).” (The Guardian)