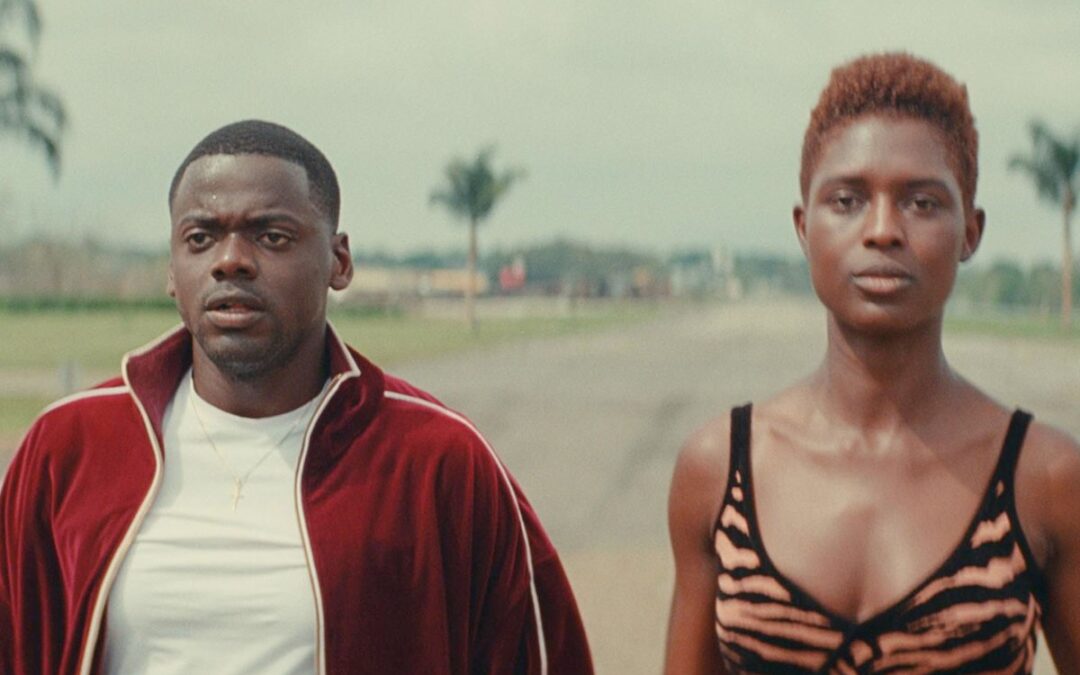 Melina Matsoukas’ “Queen & Slim” (2019) is undeniably entertaining, electrifying, stylish and enthralling. It also pulls no punches. By taking you on a provocative road trip movie, Matsoukas is confronting the racial discrimination in this country while simultaneously celebrating black culture and black people. She and her writer Lena Waithe have made a parallel to classic outlaw movies like “Bonnie and Clyde” (1967) and “Butch Cassidy and The Sundance Kid” (1969) which in themselves were appropriated in 1991 by the film “Thelma and Louise” to pose a challenge to male entitlement. “Queen & Slim” is the movie we need now.

On the surface – this action-packed movie keeps you breathless. Matsoukas is obviously well-versed in cinema, knows how to deliver the thrills – and knows how to subvert. The opening sequence is a study of minimalism and terrific lean exposition. Through quick conversation we meet Queen and Slim in a cheap diner in Ohio – on a date set up on Tinder that is not going well. She’s a defense attorney – and he works at Costco. She questions the choice of venue. “It’s black-owned,” he replies. Notice the way Matsoukas sets up the whole atmosphere – the green colors – the dim lighting – the whole thing recalls an African American version of Edward Hopper’s “Nighthawks.” The dialogue is sparse yet profoundly resonant. She just lost a case to overturn a death sentence. “The state shouldn’t choose whether he lives or die.” He doesn’t like his photos taken. “They’re proof of your existence,” she insists. Those two ideas/themes will reverberate through the film. It’s as if Matsoukas’ opening scene is her thesis statement. Soon after – Slim is driving Queen home, and there’s obviously not going to be a second date. A policeman pulls them over for a minor infraction (Slim didn’t make a turn signal.) Things get heated and the officer fires at Queen – and in self-defense Slim shoots the cop. This set-up occurs in 5 minutes. In blackness, the credits roll – as we listen to Queen and Slim discuss their need to go. “You’re a black man who killed a cop and took his gun…If you turn yourself in you will never see your family again.”

We follow Queen and Slim as they travel – the movie focuses exclusively on them and we get to know them as they get to know each other. There will be poignant exchanges between them. When she points out she’s an excellent lawyer, he replies “Why do black people have to be excellent? Why can’t we just be ourselves?”

We find out peripherally that there’s a national manhunt that has highlighted the racial divide in the country. The media labels them cop killers – while they become heroes to black people who have started protesting on their behalf. Their journey is allegorical. They go from Ohio – through the South to Florida to get on plane that will take them to Cuba through a network of secret routes and safe houses – a reverse 21st Century version of the Underground Railroad.

There are beautiful passages in their journey. They stop their drive to go for a dance. “You’re willing risk getting caught so we can dance?” she remarks. While inside a black roadside bar, they’re recognized. “Don’t worry – you’re safe here,” the bartender tells him. Later Queen wants to stop to admire the horses on the side of the road. “Nothing scares white men more than a black man on a horse,” she tells Slim. “Because they have to look up at him.” A young boy who admires them says, “I just want people to know I was here” – and later takes their photo.

The movie is quite a love story – and it succeeds well as one – because of the rapport between the magnetic and scintillating actors – Daneil Kaluuya (“Get Out” Oscar nominee) and Jodie Turner-Smith. Director Matsoukas’ has an eye for arranging things on a frame to tell her story visually. Her colors are poetic and the hip hop soundtrack is lyrical and atmospheric. I love the change of outfits for Queen halfway through the film that recall intentionally black exploitation films. She’s overthrowing and appropriating the way black people have been portrayed.

The movie ends with a mural that will remind you of the ones we’ve been seeing being made in the memory of George Floyd. At the time of the release of this film, Melina Matsoukas told “Rolling Stone” magazine “The black body is more celebrated in death than in life. One way of doing that is by honoring them while they still have breath – which we try to do in the film.”

Ultimately, Queen and Slim want to be loved and feel human. Isn’t that everyone’s right?

Director Melina Matsoukas
“Matsoukas grew up in Co-op City, a housing complex in the Bronx, until she was eight, when her family moved to New Jersey. Her father was a half-Greek, half-Jewish carpenter; her mother, a teacher, has Cuban and Jamaican ancestry. They met through the Progressive Labor Party, a group that broke from the American Communist Party for being too accommodating. “I was raised to be a part of the cause,” explains Matsoukas. Her parents always pushed her to become an activist. “How are you going to create change? How are you going to say something in life and not waste the privilege and opportunity you’ve been given?” Her father, an amateur snapper, instilled in her a love of photography. But she didn’t have a clear idea of where she was heading. She studied economics at university until she hit a wall with the maths then switched to studying film. Her first short was about a group of women on a night out in New York’s Meatpacking District, where they were handled like meat. “I hope that’s burned somewhere,” she says with a roll of her eyes. She got hooked on the medium but she was an MTV baby at heart. As a teenager, she had spent her free time sneaking off to nightclubs in the city. She realised that making pop videos would allow her to combine aspects of both photography and film, composing striking images and spinning a narrative. To Matsoukas, music videos felt like short stories, an art form in their own right.
Initially she didn’t want to go to graduate school. It was her mother who told her that, as a black woman, she would need to be twice as skilled and with twice as many credentials to make it. “I was like ‘Fine mom, I’ll apply’,” if only to appease her. When she got onto a highly selective cinematography course at the American Film Institute in Los Angeles, she thought “Shit I guess I gotta go.” The craft she learnt there has shaped her subsequent work. Cinematography, she says, “teaches you how to tell a story visually without having to be dependent on a script or on words”. This has allowed her to sustain visual narratives across her music videos that ran in parallel to the songs. She got an agent as soon as she finished her postgraduate studies. Her first proper music video was for “Money Maker”, a bombastic strip-club anthem by rapper Ludacris and R&B singer Pharrell Williams in 2006, which topped every chart. She felt in over her head. She was so nervous that her initial moodboard resembled something out of “A Beautiful Mind”. “It was a mess,” she says. But the resulting video brought her to the attention of Jay-Z. When he met Matsoukas at a party in 2006, he turned to Beyoncé and declared, “She’s the next one.” Matsoukas responded to Beyoncé by saying, “I’m coming for you!” She laughs at her younger self’s boldness. “I know, I’m corny.” A month later Beyoncé came for her. The fourth, fifth, sixth and seventh music videos Matsoukas ever made were for one of the biggest stars on the planet. Small wonder, then, that Whitney Houston, Solange, Lady Gaga, Katy Perry and J.Lo all came for her too. The work was dynamic, beautiful and fun. And she had a knack for making her subjects feel at ease: in 2007, she somehow convinced Snoop Dogg to dance in an unbuttoned shirt in “Sensual Seduction”.

“Music videos as a medium were really looked down upon and it was hard to get an opportunity,” she said. Eventually her opportunity came: Issa Rae asked her to sign on as executive producer and director of her television series “Insecure”. Her next proposition was different again. Lena Waithe, now an Emmy award-winning screenwriter and actress, approached Matsoukas to direct an episode in the second series of “Master of None”, a comedy-drama which already had a loyal following. Matsoukas was reluctant: episodic directors are given little creative freedom and she is a self-professed control freak. But the script of “Thanksgiving”, which drew on Waithe’s own experience, offered the chance to portray a story previously untold in TV drama: the coming out of a black lesbian. The episode won an Emmy and cemented the creative relationship between Waithe and Matsoukas. “There was immense trust. She really gave me that story and let me take it where I wanted to,” she says. When Waithe wrote the screenplay of “Queen & Slim” she took it to Matsoukas. The pair went backwards and forwards over ten drafts. Finally Matsoukas felt like she could paint her own picture of black life in America. “I feel like this film is the first time where it’s all on me, all of my influences, all of my life is in that frame, in those frames, in that film. One of my good friends saw it and she said…‘It’s so you’.” (1843 Magazine)