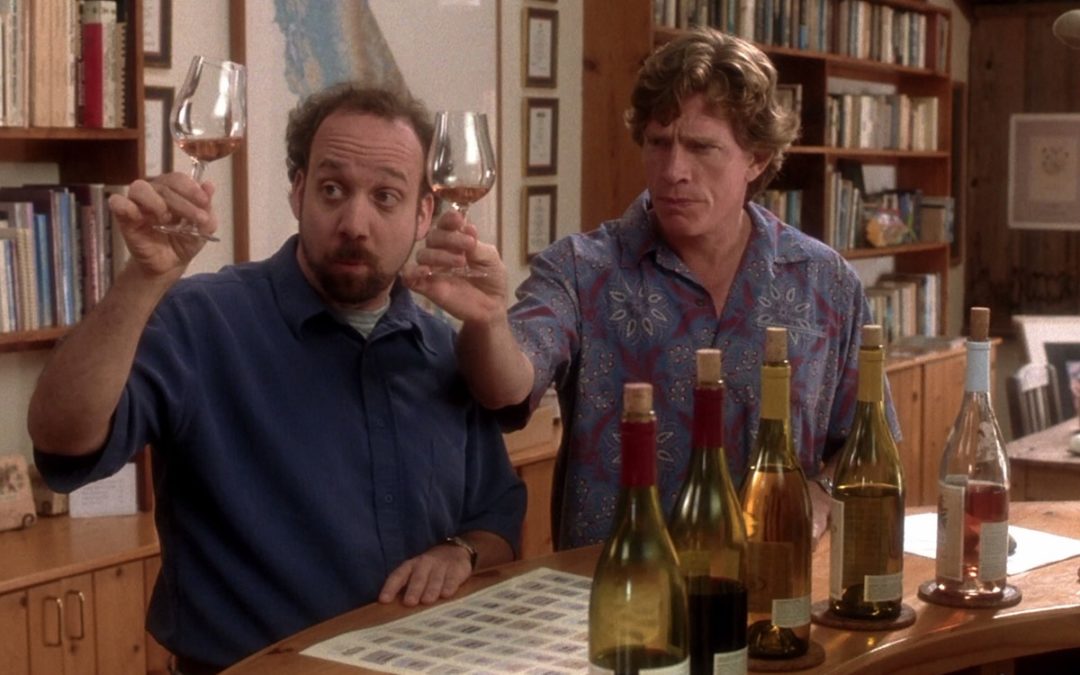 Today’s recommendation is SIDEWAYS —which launched the world’s discovery of the Santa Ynez Valley and Santa Barbara’s wine region. This is a road movie. I’ve always found that in difficult times films that take us on a journey can be a wonderful form of distraction and wonder.

I also find the main character’s situation very inspiring at this very moment. Miles, played beautifully by Paul Giamatti, has been beaten down by so many hardships, you’d think he should just give up. Yet he doesn’t. We can all use this sort of example right now. It gently explores failures with enormous care.

In addition, the film has one spectacular scene – with this quote – where they discuss wine. The character Maya says, “I like how wine continues to evolve, like if I opened a bottle of wine today it would taste different than if I’d opened it on any other day, because a bottle of wine is actually alive. And it’s constantly evolving and gaining complexity. That is until it peaks like your ’61, and then begins its steady, inevitable decline…and it tastes so f****g good.”

Savor this funny, subtle and deeply compassionate film – and I’d recommend opening a nice bottle of wine as you watch…

Sideways
(Available to stream on Starz)

The misadventures begin when Miles (Paul Giamatti), an un-recovered divorcé and would-be novelist with a wine fixation, decides to gift old college buddy and washed-up actor Jack (Thomas Haden Church) with a celebratory trip to the vineyards of the Santa Ynez Valley the week before Jack’s wedding. The two couldn’t be a more bizzare couple. Jack is an over-sexed charmer; Miles is a sad-sack worrier. Jack is looking for his “last taste of freedom”; Miles just wants to taste perfection in a bottle. Jack is fine with cheap Merlot; Miles pines for the elusive, perfect Pinot. Indeed, the only thing they seem to share in common is the same heady mix of failed ambitions and fading youth. And yet, as they make their way up the coast, Miles and Jack soon find themselves drowning in wine and women. Both men careen dangerously and comically toward mid-life crises. Now with the wedding approaching and the certainty that Miles and Jack won’t make it back to Los Angeles unscathed or unchanged, the idea that they will make it back at all starts to diminish as well.

About Director Alexander Payne
Born on Feb. 10, 1961 in Omaha, Nebraska, Payne was raised by his father, George, a restaurateur and his mother, Peggy. He began his filmmaking journey in the early 1960s when his father received an 8mm camera which Payne used to make his own films that he edited inside the camera. In 1984, he enrolled at the University of California at Los Angeles to study film. In 1992, Payne and his roommate, Jim Taylor, wrote the script for what would become his first film, Citizen Ruth, in 1996. Payne and Taylor reunited to adapt Tom Perrotta’s novel into Election in 1999, earning both an Academy Award nomination for Best Adapted Screenplay. He wrote and directed About Schmidt in 2002, starring Jack Nicholson, and again, shared a writing credit with Jim Taylor. In the wake of Schmidt’s immense critical success, Payne continued to focus on smaller, more personal films. His film, Sideways (2004), earned Payne and Taylor an Academy Award for Best Adapted Screenplay, while actually having a surprising effect on wine sales. Payne broke out into television to direct and executive produce on HBO’s Hung, from 2009-11. Returning to film, he directed The Descendants in 2011. The film went on to earn five Academy Award nominations, including nods for Payne in the writing, directing and Best Picture categories. Payne then directed Nebraska (2013), earning his third Oscar nomination for best director. In 2017, he directed and co-wrote Downsizing.

Turning the Industry Sideways: The Decline of Merlot
Merlot was once the fan-favorite red grape and wine. Then came 2004 hit movie Sideways, in which Miles, the pinot-noir-loving main character, trashes the varietal before heading into a bar: “If anyone orders merlot, I’m leaving,” he explodes. “I am not drinking any f***ing merlot.” Interest in pinot skyrocketed, while the reputation of merlot tanked. In California, growers pulled out more than 10,000 acres of merlot grapes, sparking what became known as, “The Sideways Effect.” “Poor merlot,” says winemaker Billy Dim, owner of Blendtique Wine Co. in Los Olivos, Calif. “Merlot is one of the best grapes on the planet and the movie did some damage to its reputation.” “Pinot Noir became the rising star in wine,” says Gladys Horiuchi of the San Francisco-based Wine Institute, “And Sideways had at least something to do with that.” “Pinot noir production in California has increased roughly 170 percent since Sideways was released,” says wine industry analyst Gabriel Froymovich of Vineyard Financial Associates, noting that total wine grape production has increased 7 to 8 percent during the same time.

Choosing Sideways
In this film, Payne tells us about ordinary people and equally habitual situations, managing to create a perfect combination of lightness of tone and depth of content. The melancholy of Miles, unable to look ahead and really face the future, is tempered by gags and continuous jokes, without preventing the message from reaching its destination. The passion for wine thus becomes both the reflection of moods and ways of understanding life; this creates the common thread of this journey with an elegant yet simple flavor.

While visiting the Santa Ynez Valley, Miles develops a relationship with a waitress and a fellow wine lover, Maya, who so eloquently explains in the film: “… I started to appreciate the life of wine, that it’s a living thing, that it connects you more to life. I like to think about what was going on the year the grapes were growing. I like the think about how the sun was shining that summer and what the weather was like. I think about all those people who tended and picked the grapes. And if it’s an old wine, how many of them must be dead by now. I love how wine continues to evolve, how if I open a bottle the wine will taste different than if I had uncorked it on any other day, or at any other moment. A bottle of wine is like life itself – it grows up, evolves and gains complexity. Then it tastes so f***ing good”. The characters’ reasons for loving wine reflect not only their appreciation of the industry and its product but also a reflection of themselves.