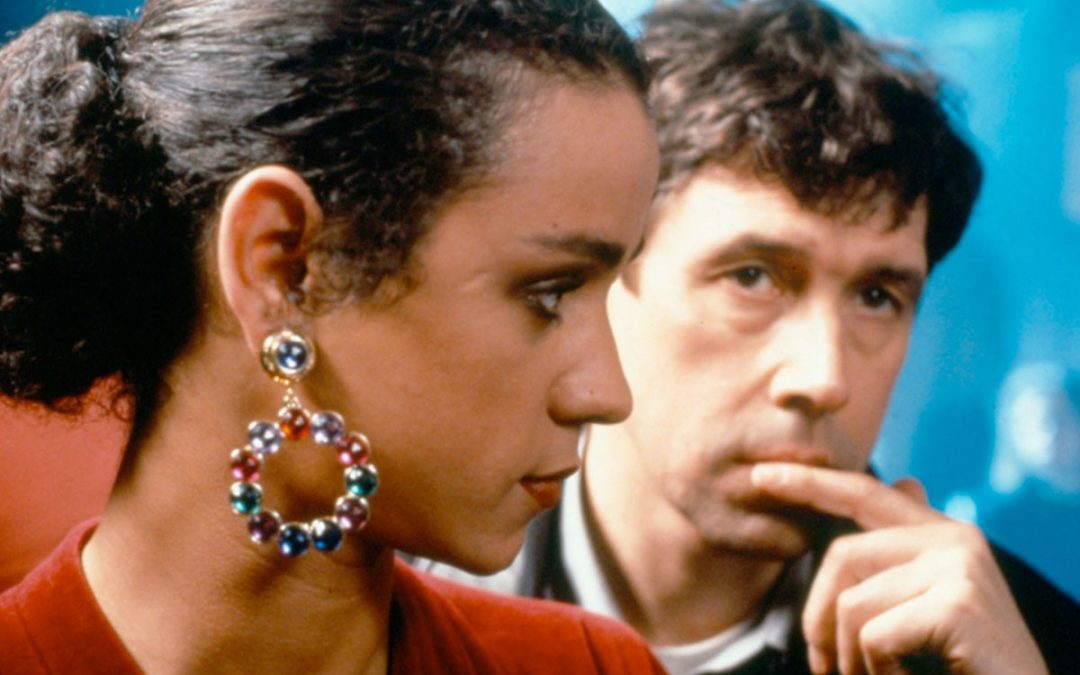 Recently I polled my colleagues at work about whether they knew the secret in “The Crying Game,” and I was surprised to find out how many of them had not seen this haunting film released in 1992. And because of that fact, I will not reveal it – for I hate spoiling things. 20 years later, this Academy Award winner remains thrilling. I’d say that revisiting it makes it even more scrumptious – for you to fully grasp the web it weaves right from the start. Boxing this film into a particular genre would be a disservice to it – for it is unlike anything you’ve seen before. It has aspects of a thriller, a political drama and a romance – as difficult to define as it is to predict its plot. Its elusiveness well matches its themes – identity, race – and the secrets of the human heart.

Jody (Forest Whitaker) – a British soldier stationed in Northern Ireland – is seduced by Jude (Miranda Richardson) and kidnapped by the Irish Republican Army. One of the other kidnappers – Fergus (Stephen Rea) – is ambivalent about his role – and becomes friends with Jody – going as far as promising him to look after his girl – Dil – if something were to happen to him. The operation is botched and Fergus goes into hiding in London – where he seeks out Dil and they become infatuated with each other. In the meantime, Jude – from the IRA – finds Fergus and threatens to kill Dil if he doesn’t cooperate with a new violent plan for political gains. People are not what they seem to be and you do not know whom to trust.

When first released the film was successfully marketed for a big twist that takes place by the halfway mark. From the first scene – there’s deception taking place –Jody is seduced by Jude in a gorgeous tracking shot while the song “When a Man Loves a Woman” plays. Notice the camera panning from right to left – uncomfortably to the eye – for we process movement in the opposite direction. Jody needs to take a leak and he does so by going to a latrine while still holding her hand. “I’ve never taken a piss holding a girl’s hand before,” he exalts. There’s quite a lot of information being given to you – and all of it is essential. Neil Jordan uses noir undertones – making Jude, the IRA terrorist, the quintessential femme fatale – undergoing three radical visual transformations, going from blonde to dark haired. There is also a Hitchcockian feel – reminiscent of “Vertigo.” Once kidnapped, Jody starts befriending the reluctant Fergus and tells him about Dil. With his stories, Jody builds an image of a woman that is beautiful, mysterious and unattainable. Dil becomes the object of desire.

The relationship that develops between Fergus and Dil is one of the most fascinating I’ve encountered. Observe how they interact with each other – when they meet at the bar. Dil uses a conduit – the bartender (slyly played by Jim Broadbent) to communicate with Fergus. The final scene is worth analyzing without spoilers – but pay attention to what is between the two of them. The Crying Game was and still is a nuanced and complicated look at the politics of human nature.

Jaye Davidson’s performance as Dil is one of the greatest screen debuts.

Bartender: “Who knows the secrets of the human heart.”

The Crying Game
Available to stream on Netflix and to rent on Amazon Prime, YouTube, Vudu, iTunes, Google Play and Microsoft.

Neil Jordan on “The Crying Game”
In an interview with The Guardian, writer and director Neil Jordan discusses making “The Crying Game.” “The last two films I’d directed in America had been bruising. If I couldn’t get “The Crying Game” made, I intended to give up directing and return to writing. The provocative nature of my script – which addressed the Troubles, race, sexuality and gender confusion – made it hard to finance, but I was thrilled to just be making something I believed in. The opening tracking shot of the fairground, from the bridge over the River Nanny in Laytown, had great personal resonance. I grew up in County Meath and spent much of my childhood playing beside that bridge. My father died while fishing underneath it. I’d known Stephen Rea, who plays Fergus the IRA terrorist, for years. He’s the perfect actor, able to register three emotions at once. People objected to the casting of Forest Whitaker, an American, because there are so few parts for British black actors, but for me there was no other choice. He immersed himself in the role of the English squaddie, including the London accent – even if he didn’t lose quite enough weight.

Bringing “The Crying Game” to the Big Screen
“Jordan started writing The Crying Game in the early 1980s. He’d just made his first film, “Angel,” a haunting drama about Sectarian violence in Northern Ireland, when he came up with an idea for a more intricate tale about The Troubles…For Jordan, the drama lay in testing this IRA man’s own prejudices. “Can I take this guy who defines himself as Irish, as white, as an IRA volunteer, as a Nationalist – and can I construct a drama that will confront him with all sorts of challenges to every which way he identifies himself?” Jordan found the first part of this story relatively easy to write. It was when his IRA man got to London that his script got stuck. He made several other fine films, including “The Company of Wolves” and “Mona Lisa,” before he found the twist that made it click. “It made the situation of captivity pregnant with all sorts of ironies and possibilities,” says Jordan…“It introduced a kind of weird eroticism.”

Despite his strong track record, Jordan had trouble finding backers for this project. It didn’t fit any established genre. It wasn’t a straightforward thriller, or a conventional romance. Thankfully his producer Stephen Woolley loved it. Thanks to Woolley’s passion and persistence they eventually found £2.3 million – just enough to make it, but it was still a rocky ride. “It was a real challenge, because there was very little money.” Woolley’s company, Palace Pictures, went bust while “The Crying Game” was in production. Woolley had to dip into box office takings from his arthouse cinema (The Scala in London’s Kings Cross) to keep the movie afloat. However a small budget had its advantages. “We had the freedom of poverty,” says Jordan. “It does force you to work out what this movie should actually be about.” Because he couldn’t afford many takes, the performances remained fresh and vital. “You’ve got to get to the heart of the scene because you know you’ve probably only got three chances at it.” To satisfy his backers, Jordan had to shoot a happy ending (a corny Christmas epilogue, included as an extra on the DVD). “I really don’t want to shoot this ending, because it’s really shit,” Jordan told Woolley. “Please don’t force me to shoot this ending, because it’s just a waste of money.” Thankfully, Jordan was eventually allowed to shoot the bittersweet ending he wanted, and the final cut was stunning, with mesmeric performances by Stephen Rea as the IRA man, Forest Whitaker as his hostage, and newcomer Jaye Davidson in an Oscar-nominated performance. “It was a thrilling experience making it,” says Jordan, and that excitement shone through.” (www.bbc.co.uk)

Casting Stephen Rea
“Jordan wrote the part of Fergus specifically for Rea. Rea is from Belfast, and he brought a deep sincerity and authenticity to the role. “I can’t imagine anybody else in that role,” says Jordan. “I’ve done several things with Stephen that I can’t imagine anybody else could do.” Looking back, “The Crying Game” now seems uncannily prophetic. In 1992, it seemed there was no end to The Troubles, but in fact that bloody conflict was actually entering its final phase. “The movie did respond to something that was abroad at the time.” It also anticipated a growing awareness of transgender issues. Without really meaning to, Jordan had caught the sexual and political zeitgeist. “I make films about characters who don’t fully understand themselves and their own motivations. I don’t believe that anybody really does. “The central character in this movie defines himself as Nationalist, as an Irishman, as a political activist, as an IRA volunteer – and eventually he finds out that he’s none of those things. “The sum of what he is is far greater than that, or far more simple than that, or far more intriguing than that, in a strange way. That’s why the movie starts as a realistic thriller and becomes an erotic game.”

About Writer and Director Neil Jordan
“Born in 1950 in Sligo, Ireland, Neil Jordan began his career as a writer. His first book of stories, “Night In Tunisia” (1976), won the Guardian Fiction prize. Since then he has published seven novels, “The Past” (1979), “The Dream of a Beast” (1983), “Sunrise With Seamonster” (1994), “Shade” (2005), “Mistaken” (2011), “The Drowned Detective” (2015), and “Carnivalesque” (2017). In 1982, Jordan wrote and directed his first feature film, “Angel,” and has written, directed, and produced more than fifteen films, including “Company of Wolves,” “Mona Lisa,” “The Crying Game,” “Interview With the Vampire,” “Michael Collins,” “The Butcher Boy,” “The End Of The Affair,” “In Dreams,” “Breakfast On Pluto,” “Ondine,” and “Byzantium.” Neil Jordan has also written, directed, and produced three seasons of the television series “The Borgias,” with producer James Flynn and Showtime. His films have been honoured with numerous awards worldwide, including an Oscar (Best Original Screenplay), BAFTA’s, Golden Globes, a Golden Lion from the Venice Film Festival, and a Silver Bear from Berlin.” (www.focusfeatures.com) Jordan wrote the screenplay for the 2017 film, “Greta,” and created the Sky Atlantic series, “Riviera.”