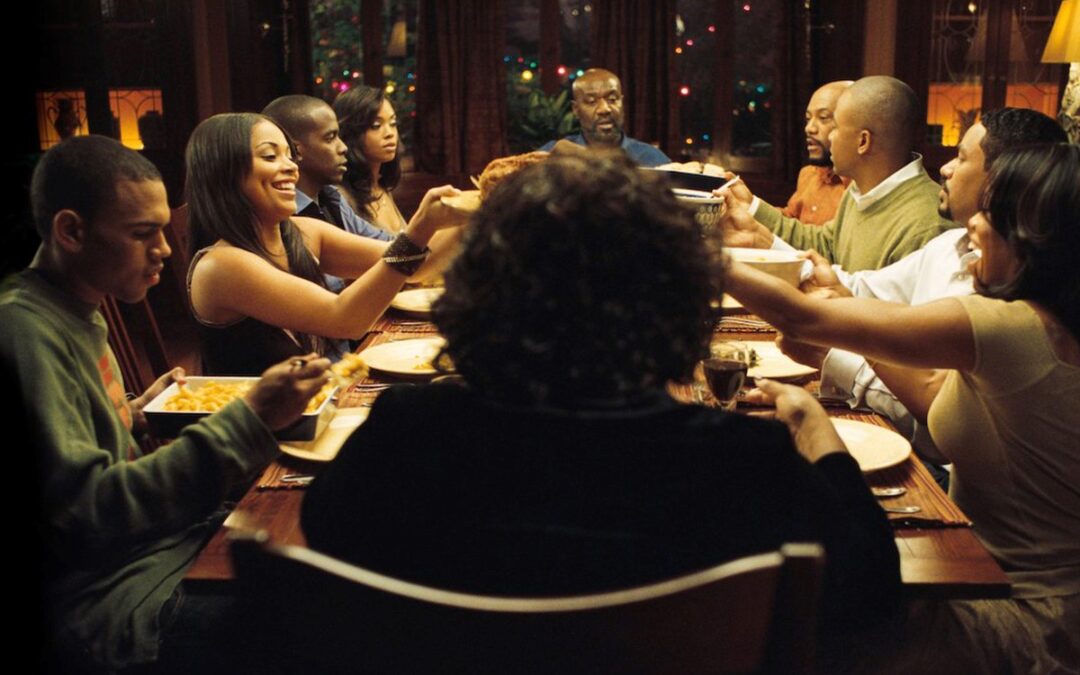 “And as each one of you go in your individual lives, I want you take this with you. The Whitfields are a family. We will always be a family. And no one and nothing can change that.”

It is indeed a special moment. Right before there’s been a lot of comings and goings and laughter. A big family gathers round a big table with plenty of food, and they hold hands and say a blessing. “Bless, O Lord, almighty God the Whitfield family and home. May health, purity, goodness, meekness, and every virtue, Father, reign on this Christmas Holiday.”

Last night, I started to contemplate and come to terms with the fact that this year our celebrations will be like none other. Usually after Thanksgiving, we start getting the invites for gatherings and friends make a point of wanting to get together to toast the yuletide. I have to be honest that there are certain years that I get overwhelmed and look forward to the rush going by. Not this year. I miss the camaraderie and the flurry of merriment and excitement. I miss just hearing a big room filled with people breaking into laughter – and warm hugs wishing each other good cheer. There’s always next year.

I’m glad I got to spend time with the Whitfields – who are at the center of Preston A. Whitmore II’s “This Christmas” (2007). They make for really good company in this easygoing comedy drama with lots of music. They’re a boisterous bunch who tease each other, argue with each other – but have a lot of love for one another. I find it refreshing as well that it takes place in Los Angeles, for in movies we rarely see people celebrating the holidays in California — and they’re African American.

It all takes place in three days around Christmas – as matriarch Ma’Dere Whitfield is welcoming her six grown children back home. Chasing his dreams of becoming a musician, her husband left her to raise the children, and she now lives with Joe – a fact that she keeps a secret but all of them suspect.

We meet the oldest daughter Lisa who didn’t go to college so she could help mom with the dry-cleaning business. She’s married to Malcolm, and they have two children. There’s also her sister Kelli who is a Harvard graduate living in NYC, and her brother Claude who is in the Army. Younger sister Melanie is a perennial college student – who has changed majors many times and who’s brought her new boyfriend Devan. Kelli points out that Mel’s major is determined by who she’s dating. There’s also Michael “Baby” – who’s a photographer – and is the only who still lives at home.

Missing is Quentin – who is a musician like his father and who hasn’t come home in four years – and resents that Joe has usurped his father’s place. He will of course make a belated surprise appearance to his mother’s delight. We make all of their acquaintances and it is a credit to director Whitmore that we soon get to know all of them well. Like most families, they harbor secrets from each other – yet, in the ensuing days, theirs will all be exposed – and reconciled.

There will be drama and – fortunate for us – the cast includes the formidable Regina King as the oldest daughter, Idris Elba as Quentin, the always dependable Loretta Devine as Ma’Dere, and Delroy Lindo as Joe, among others. Ms. King is the standout. Her comedic timing is put to good use (a scene involving baby oil is eyebrow raising) but it is one sequence where she unleashes her anger that is quite unforgettable. It takes place during a torrential downpour and involves disposing of a Cadillac SUV to the tune of Aretha Franklin’s “I Never Loved a Man.”

Not only do we get plenty of great holiday songs playing in the soundtrack – we also see singer Chris Brown – who plays the role of the youngest son – belting a couple of tunes.

But it’s the love that this family shares with one another – in good times and bad times that proves irresistible and heartwarming. Stay for the credits and watch the entire cast – out of character – cut a rug to Marvin Gaye’s “Got to Give It Up,” and blow kisses at you.

Melanie: “So, technically, you slept with Santa?”
Kelli: “Well, I didn’t know he was Santa at the time… but technically, I guess I did.”
Melanie: “Well, ho, ho, ho!”

Writer and Director Preston A. Whitmore II on Bringing “This Christmas” to the Screen
…Whitmore…can’t seem to keep his hometown out of the picture. He loves to talk about Detroit, he writes about it and he says it will always be home. Whitmore’s career has transported him far from the neighborhood where he became a young man. But his film, “This Christmas,” pays tribute to the warm childhood memories he left behind. While many of Whitmore’s previous films – “Fled” (1996), “Doing Hard Time” (2004) and “Crossover” (2006) – explore the complexities of crime and violence, his latest effort is stewed in much sweeter stuff – Momma’s cooking, church singing, family holidays and reconnection. “The spirit of Detroit and my family inhabit all of the experiences and characters in this film,” says Whitmore, whose early writing included love letters penned for high school friends. “The title of the film had to be named ‘This Christmas’ because of the Donny Hathaway song by the same title. When Donny Hathaway started to play on the radio in Detroit, it represented the beginning of the Christmas season.” Screen Gems approached Whitmore about making a family reunion picture… but he was hesitant after the beating movie critics gave his basketball picture “Crossover,” which was shot in Detroit. “My first experience with directing was not good. I was gun-shy,” he says. “But I knew that in order for my pictures to be what I intended them to be, I had to direct.”

Writer/Director Preston A. Whitmore II on “This Christmas”
“This Christmas” spotlights the six-sibling Whitfield family, named after his father’s side of the family, who haven’t spent a Christmas together in four years. The matriarch Shirley (Ma Dear) Whitfield, played passionately by veteran actress Loretta Devine, was written as a tribute to Whitmore’s mother, Shirley Ann Whitmore, who passed away three years ago. “She was a single mother. She was the mother, the father, the nurse, the everything,” Whitmore says. “To do all of those things, and raising three kids, takes tremendous fortitude.” Whitmore adds that the male siblings – played by Chris Brown (Baby), Idris Elba (Quentin) and Columbus Short (Claude) – all represent him at different points of his life. “As a teenager … I was the kid who, like Baby, always had a camera,” Whitmore says. “After I quit high school, I joined the Marines, much like the character Claude, and when my tour was over, I landed in California on a wing and a prayer, similar to the situation that Quentin struggles with in the film.” During Whitmore’s early years in California, he worked as a security guard while pursuing a political science degree. He also worked in a law firm and wrote raps. “My stories were really too big for a three-minute song,” Whitmore jokes. Judging from the size of the cast, “This Christmas” is an example of a big story. Rounding out the three male siblings are sisters Lauren London (Mel), Regina King (Lisa) and Sharon Leal (Kelli). “The Regina King character is based on my older sister … she was kinda bossy,” says Whitmore, the youngest of three. “This Christmas” seeks to reach beyond sibling squabbles to include notions of acceptance, vulnerability and the many flavors of love. And similar to Whitmore’s Detroit upbringing, a stumbling block gets dropped in every now and again. “I think the fact that we grew up without a lot motivated Preston to go after his dreams,” says Whitmore’s cousin Michelle Morris, who lives in Detroit. “When we were growing up, he always had a camera and made family pictures in the basement when most kids were outside playing.” “He comes from a place of a strong family background,” says producer Frank Mancuso Jr. “He feels his characters deeply; he’s able to put people in real life situations with people they trust and watch how they respond, but from a moral standpoint. Preston is one of those guys.” Whitmore says, “Where we are right now with the social climate of America, the war and the economy in the state that it is, people want to see a movie that makes them feel good. (thesouthern.com)

Regina King on Director Preston and The Making of “This Christmas”
“…Preston had a really lucky situation. Clint Culpepper, who is the executive producer and president of Screen Gems, surrounded him with enough components that it (the quality of the film) was really hard to miss. When you look at this incredible cast and our DP (Director of Photography/Cinematographer) Alexander Gruzynski, who was absolutely amazing; he made sure to take the time and see to it that we were lit properly. So, sometimes when there was an effort to rush the scenes, we also had the luxury of experience to get the scenes right. When you see this film, I am so happy Alexander demanded that we take the time needed. Here, you have a family made up of a bunch of shades of brown, that can be difficult to light; and, that’s the reason why so often in the past when you see people of color in films with white people, somebody’s gonna end up not being lit correctly. Nine times out of 10, it’s going to be the person of color.” (lasentinel.net)

Regina King on “This Christmas”
…”I don’t like to call this a ‘black film’ because the issues and themes the Whitfields deal with are universal. They just happen to be a black family…you don’t see this (a loving adult relationship) in a family film in general, across the board, which is why I think ‘The Cosby Show’ was so successful. ‘Cliff and Claire Huxtable’ (Cosby Show parental figures) were like the most romantic couple on TV. And, they were never portrayed in a lewd or loose manner, never inappropriate. They were respectful and looked into each other’s eyes. Delroy and Loretta kind of continue on that same energy and it was just great to see a man –our men– in this capacity, and, when I say ‘our men’ I mean as a nation. So often we get down on our men. Here’s a guy who is fathering six kids who are not even his and he does so gladly because of his love for this woman. He knows they are a package deal.” (lasentinel.net)

About Director Preston A. Whitmore II
Born in Detroit, Michigan, Preston A. Whitmore II made his filmmaking debut by writing and directing “The Walking Dead” (1995)-the story of black soldiers in Vietnam…for the next few years Whitmore concentrated on writing for the sitcom “Malcolm and Eddie” (1996 – 2000), starring Eddie Griffin and Malcolm-Jamal Warner of “The Cosby Show.” His next feature directorial effort was “Doing Hard Time” (2004), about a father who aims to avenge the death of his eight-year-old son in a gangland shooting… “Crossover” (2006), which he also wrote and directed, is about a star basketball player who wants to become a doctor, and winds up letting his friend do time for an assault charge rather than face the music himself. The film did respectably…at the box office, earning back almost twice it’s initial cost. (tribute.ca) A few of his other works include “True to the Game” (2017) and “Dutch” (2020) and most recently he is in pre-production for “Real Talk” and “California Love” in 2020.