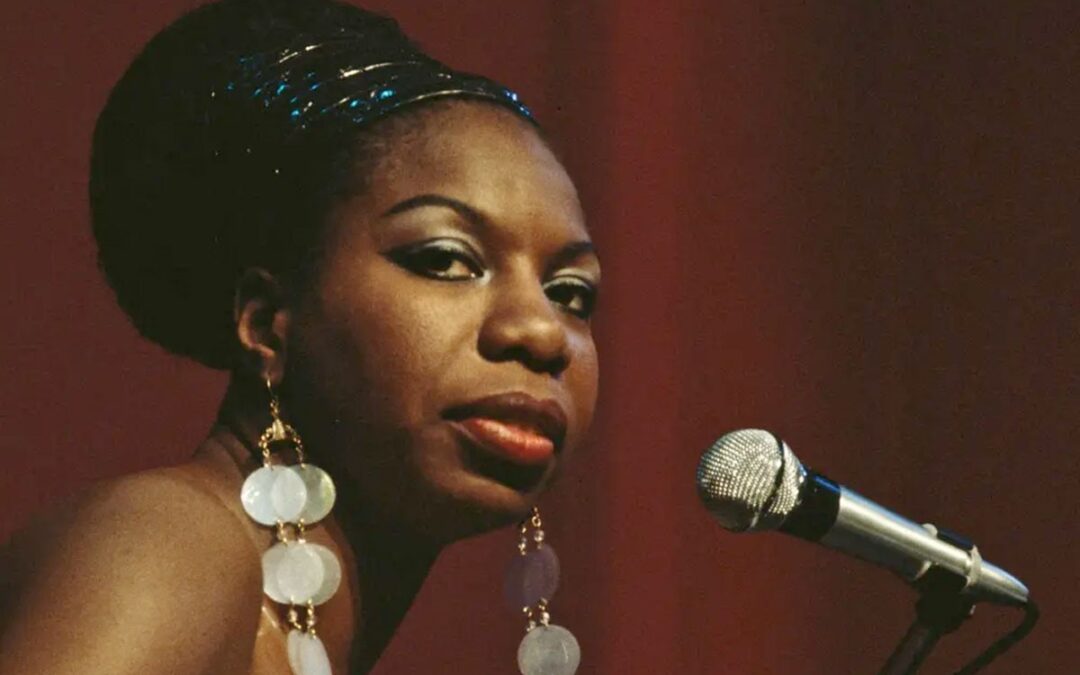 “I choose to reflect the times and the situations in which I find myself. That to me is my duty and at this crucial time in our lives, when everything is so desperate, when every day is a matter of survival, I can’t help but be involved. Young people, black or white, know this, and so that’s why they’re so involved in politics. We will shape and mold this country or it will not be molded and shaped at all anymore.” The above was spoken in the 60s by Nina Simone – the singer, songwriter and Civil Rights activist, and it’s featured in the impassioned and vibrant documentary about her life “What Happened, Miss Simone?” which was released in 2015. It dawned on me as I watched this film last night – that the times change your perspective of a particular work. This documentary has never felt more indispensable than it does right now. Nina Simone’s journey serves as a lighthouse to this particular moment in time.

Director Liz Garbus builds the documentary from interviews with Nina’s family, photos and most dramatically from archival interviews with Ms. Simone herself – as well as her diary entries – interspersed with clips of her singing and playing. Her spoken and sung voice makes for incredible companionship and elevates this material to something close to nirvana. As she herself describes it, she used her timbre to “convey an emotional message. Sometimes I sound like gravel, sometimes I sound like coffee and cream.”

Garbus doesn’t shy away from showing us the darker side of Simone’s biography – including domestic abuse and depression. We get a full portrait of the artist as well as the private individual. The aforementioned diary entries are revealing and at a few times invasive. This was a groundbreaking artist who was ahead of her time. “The High Priestess of Soul” had been trained as a classical pianist and merged “fugue and counterpoint to the freewheeling spontaneity of the jazz world.”

The film takes on electrifying urgency when it reaches Simone’s involvement with the Civil Rights Movement. “As the Civil Rights Movement swung into high heat, she swung into high gear,” a close friend of the artist comments. After the killing of four black girls during a bombing in Birmingham, Alabama in 1963, Simone wrote and performed the song “Mississippi Goddam.” You get to see a clip from her performing it right before the Selma march. Later, Simone concentrated her efforts to use her music as protest and to educate black youth. Her song “To Be Young, Gifted and Black” – which was written in memory of her friend, author Lorraine Hansberry – became an anthem of the Civil Rights Movement. Her career sputtered for she became difficult to book for she’d only play political music.

The last half of her story I’ll let you discover for yourself. It makes for essential viewing.

Nina Simone: “To me America’s society is nothing but a cancer, and it must be exposed before it can be cured. I am not the doctor to cure it. All I can do is expose the sickness.”

What Happened, Miss Simone?
Available to stream on Netflix and to rent on Amazon and iTunes.

Nina Simone
Born Eunice Kathleen Waymon in Tyron, North Carolina in 1933, Nina Simone began playing the family piano at the age of three. Her mother Mary Kate Waymon, a minister and choir director at a Methodist church in Tyron, interpreted her daughter’s gift as a God-given talent. Waymon began to study piano at age six with Muriel Massinovitch, an English pianist and Bach devotee married to a Russian painter husband. Waymon credited “Miss Mazzy” for teaching her to understand Bach; she credited Bach for dedicating her life to music. Eunice’s father, John Divine Waymon, had been an entertainer before he chose to move his family to Tyron, a North Carolina resort town, and set up a barbershop and dry cleaners to support his family. In her autobiography – I Put a Spell on You – Waymon describes Tyron as “uncommon” for a southern town because blacks and whites lived together in a series of circles around the center of town, which allowed them to mingle and form friendships.

Not only did her musically talented parents back their child prodigy offspring, Miss Mazzy and the entire community supported the Eunice Waymon Fund, a bank account that family, friends, and Tyron residents envisioned would allow her to become the first black American classical pianist. Over the years the fund grew large enough to support her advanced education. Waymon spent one year at Juilliard School of Music in New York, where she studied with Dr. Carl Friedburg. She had planned to attend the Curtis Institute of Music in Philadelphia, Pennsylvania, but failed the recital entrance performance and was not admitted. Convinced that she was rejected on racial grounds, she changed her life direction.

Indicative of this change was her invention of a stage name. She chose “Nina,” a nickname given to her by a former boyfriend, and “Simone” after the French actress Simone Signoret. Nina Simone soon began performing in jazz clubs. Her powerful stage presence and soulful voice attracted the attention of the recording industry. She was signed by the Bethlehem label in 1957. Her 1958 hit “I Loves You Porgy” sold a million records.

Over the next four decades Simone recorded more than forty albums with Colpix, Philips, RCA, and other labels. Her mesmerizing alto voice was aptly described by jazz critic Adam Shatz of The Nation as “impossibly deep yet unmistakably feminine, lacerating in its intensity yet also capable of disarming tenderness. To listen to her voice was to feel almost hijacked by its power.”

Influenced by the civil rights movement in the 1960s, Simone became known as the “Singer of the Black Revolution.” She composed and recorded a number of songs with political protest themes including “To Be Young, Gifted and Black,” “Old Jim Crow,” “Why? (The King of Love Is Dead),” “Backlash Blues” and “Mississippi Goddam.” Simone also collaborated with friends Langston Hughes, James Baldwin, and Lorraine Hansberry to financially support the movement and took part in marches and spoke and performed at civil rights rallies.

In the early seventies, disillusioned by life in the United States, Simone divorced her manager-husband Andrew Stroud and moved first to Barbados and then to Liberia, Switzerland, and the Netherlands before finally settling in France in 1992. Nina Simone died at her home in Carry-le-Rouet France on April 21, 2003.(blackpast.org)

“Mississippi Goddam”
Nina Simone composed “Mississippi Goddam”–her biting song about racial injustice–in September 1963, immediately after four young girls in Birmingham, Alabama, died in a church bombing. It reflected her growing determination to be part of the Civil Rights movement, at the insistence, she conceded, of her friend, playwright and author Lorraine Hansberry. Hansberry had told Nina that she was part of the movement because she was black. “It made no difference whether I admitted it or not,” Nina said, “The fact was still true.”

“Mississippi Goddam” was no minor-key lament and was more commentary than anthem, its insistent up-beat rhythm at odds with its bracing lyrics. They were at once a geography lesson (“Alabama’s got me so upset/Tennessee made me lose my rest/And everybody knows about Mississippi Goddam”) and a catalogue of fears: “Hound dog on my tail/School children sitting in jail/Black cat across my path/I think every day’s gonna be my last” were in its opening stanza.

Of the many times in the years to come that Nina talked about “Mississippi Goddam,” her most expansive remarks came during her September 10, 1964 appearance on Steve Allen’s evening television talk show. She conceived the song “during the time when James Meredith was finally getting into the University of Mississippi,” she explained. “And I was beginning to get angry then. First you get depressed,” she went on, “and then you get mad. And when these kids got bombed, I sat down and wrote this song. And it’s a very moving, violent song cause that’s how I feel about the whole thing.”

According to Nina, the single of “Mississippi Goddam,” created a stir in some quarters. “We got several letters where they had actually broken up this recording and sent it back to the recording company, really, telling them it was in bad taste. How could I stoop to this,” she told Allen. “They missed the whole point. What astounds me is if the song were written about a different state, they wouldn’t care.”

Nina had composed “Mississippi Goddam in a moment of personal anger and anguish. Her trenchant lyrics resonate decades later, offering both a history lesson and a gauge of racial progress, and her prescription near the end with a timeless plea: “You don’t have to live next to me/Just give me my equality.” (Library of Congress)

About Director Liz Garbus
Liz Garbus is an Academy Award, Grammy, DGA and BAFTA-nominee, and winner of a Peabody and two Emmy awards, making her one of the most celebrated documentary filmmakers working today. She is renowned for creating electrifying archival-driven historical documentaries that retain all the narrative velocity, artistic craft and conceptual depth of propulsive vérité films. Her 2018 Showtime docuseries The Fourth Estate was nominated for an Emmy for Outstanding Documentary or Nonfiction Series. What Happened, Miss Simone?, a Netflix original, was nominated for a 2016 Academy for Best Documentary Feature and took home the Emmy for Best Documentary or Nonfiction Special. Her latest miniseries, Who Killed Garrett Phillips? premiered on HBO in July. Currently, Garbus is in post-production on Lost Girls, for Netflix, based on the book by the same name, starring Amy Ryan, Gabriel Byrne and Thomasin McKenzie. (WFF)