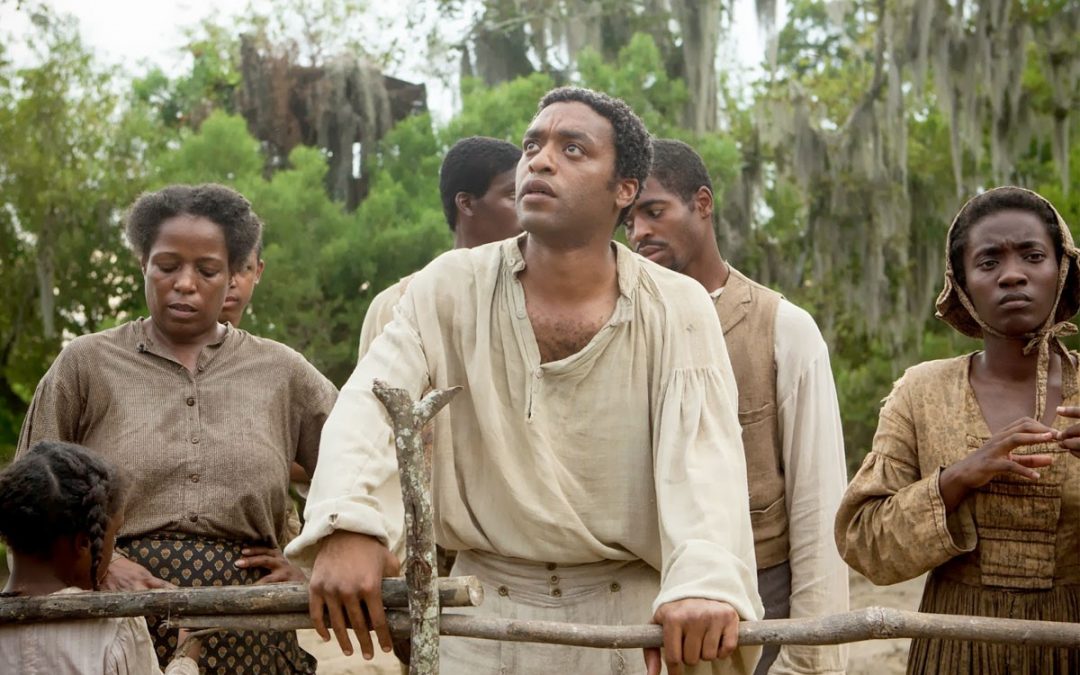 “Slavery is an evil that should befall none,” is spoken by Solomon Northup – the main character in the powerful “12 Years a Slave.” Last night, on the eve of Juneteenth – the national commemoration of the official ending of slavery in the United States – it felt necessary for me to sit down and revisit the 2014 Best Picture Oscar film.

I would be dishonest if I didn’t tell you it’s a difficult viewing experience – but yet again – that’s the way it should be. Facing realities – as painful and unpleasant as they may be – helps us understand how to move forward from the past. Art has the power to do that. Up until this movie came along, we hadn’t seen such a brutal depiction of slavery on screen and the way it robbed people of their humanity. “12 Years a Slave” should be required viewing. Seeing it again last night I was astounded by director Steve McQueen’s steadfast, fearless and measured vision and by the exceptional force of this film. Adapted from the autobiography by the same title, it tells the story of Northup – a free black man who is kidnapped in 1841 and sold into slavery, forced to work on plantations in the state of Louisiana for twelve years before being released.

McQueen’s opening is the camera walking through sugar cane – until we stumble unto a group of slaves working on the field. We are instantaneously made to feel as if we’re witnessing – spying and accomplices of the unfolding narrative. There’s a directness in the way scenes are shot – no sentimentality or romanticizing. A slave salesman played by Paul Giamatti comments “My sentimentality extends the length of a coin.” McQueen who’d previously done the features “Hunger” and “Shame” is known for long continuous uninterrupted shots – a technique that is preferred by realist filmmakers. In this case, he doesn’t allow us to look away as we bear witness. It’s in those lengthy observations that we get to see things in a completely different way – finally. The shocking realization I had last night is how this film – through Northup – immerses us visually and emotionally in the process of what it feels like for an individual to go through the process of being stripped of their rights and humanity – and that of course – Northup is just representing one of the victims. That is the true horror.

The film is beautifully shot intentionally – it looks like Goya’s “The Third of May 1808” painting. Chiwetel Ejiofor as Northup is a towering presence. The scene towards the end of the movie where he stares at the camera and the gamut of emotions that go through his eyes is unforgettable. Michael Fassbender as the tortured and sadistic slave owner is ruthless. Academy Award winner Lupita Nyong’o is passionate and heartbreaking as Patsye. Steve McQueen, who produced the film as well, became the first black filmmaker to win the Oscar for Best Picture.

Mistress Shaw: “In his own time, good Lord will manage them all. The curse of the pharaohs were a poor example of what waits for the plantation class.”

12 Years a Slave
Available to stream on Netflix.

The Story Behind the Film
“In 1825 a fugitive slave named William Grimes wrote an autobiography in order to earn $500 to purchase freedom from his erstwhile master, who had discovered his whereabouts in Connecticut and was trying to remand Grimes back into slavery. At the end of his story the fugitive makes a memorable offer: “If it were not for the stripes on my back which were made while I was a slave, I would in my will, leave my skin a legacy to the government, desiring that it might be taken off and made into parchment, and then bind the constitution of glorious happy and free America.” Few literary images have more vividly evoked the hypocrisy of a nation that exalted freedom while legitimising slavery.

The Life of William Grimes was the first book-length autobiography by a fugitive American slave, in effect launching a new literary genre, the slave narrative. (The Interesting Narrative of the Life of Olaudah Equiano, published in 1789, is widely regarded as the first ever, but Equiano published his book in Britain.) Scholars have identified about 100 American slave narratives published between 1750 and 1865, with many more following after the end of the civil war. The most famous are those by Frederick Douglass and Harriet Jacobs, but the release of a new film has stirred interest in the account of a man named Solomon Northup. His book, Twelve Years a Slave, one of the longest and most detailed slave narratives, was a bestseller when it appeared in 1853.” (The Guardian)

The Making of 12 Years a Slave
“While McQueen doesn’t like to storyboard or precisely plan out his shots in advance, he does like to have broader discussions with his team. “We talk about art and vision and ideology — everything you can possibly imagine,” says Bobbitt. One point of reference early on was the art of American artist Kara Walker, whose black paper silhouettes depict American race relations and the history of slavery in both ironically playful and grotesque ways. They were an important visual reference for the filmmakers, “because of her art’s anger and humor and honesty,” says Bobbitt. Even though Bobbitt and McQueen didn’t set out to consciously evoke Walker’s style, their fascination with her work fed their own use of darkness and silhouettes. The cinematographer points to the scene where Solomon is first beaten, with a wooden panel, in Washington, D.C., after waking up in chains: “We’re seeing Solomon’s reaction, but he’s hidden in the shadow. That allows us to project our feelings onto him. The audience has to search the frame a bit. Once you get them engaged like that, I think that heightens their emotional involvement.”

Almost the whole scene is played out from this one angle — looking at Solomon from the front, so that we don’t really see what the paddle is doing to his back. The shot could be so much more graphic — there is no blood or broken skin to be seen — and yet it’s one of the film’s most violent moments. In part, because the audience so viscerally shares Solomon’s disbelief. “That was the first instance of violence in the film,” McQueen says. “I wanted us to experience it the way Solomon experiences it — so sudden, so quick.” Over the years, McQueen has relied on Bobbitt’s versatility with the camera: Having spent decades as a news cameraman, the cinematographer is as comfortable doing static long takes as he is doing handheld, vérité-inflected shots. Sometimes, this allows them to discover key moments that didn’t previously exist. Take, for example, the scene where Solomon burns the letter he was writing to be smuggled home to his family. “The shot itself was supposed to be just of Chiwetel’s face lit by the burning paper,” Bobbitt recalls. But as the actor dropped the letter, Bobbitt instinctively panned down to see the letter in flames. McQueen was immediately fascinated, and they decided to include a shot of the letter burning away into the night, resulting in one of the film’s most visually resonant moments. “The original angle wasn’t quite right, but we realized it could be quite fantastic,” Bobbitt says.

The image of the letter burning away in the night is a ravishing one, made heartbreaking by our knowledge of the contents of the letter. It is perhaps a perfect encapsulation of the two words that Bobbitt says kept coming up in their discussions of 12 Years a Slave: “Simplicity and beauty … We wanted to use the natural beauty of this world as a counterpoint to the degradation of slavery.” It raises the question, one that some critics have asked: Should (or can) a film about slavery be visually beautiful? “Think of Goya,” McQueen says. “He painted the most horrendous acts of violence of his era, in the most beautiful way. The beauty was a way of saying, ‘Look at this, I want your attention.’” (The comparison to the Spanish painter, by the way, is one our own David Edelstein makes in his review of the film.) “People say that this film is hard to watch,” says Shatz about the film’s sound design. “I’ve worked on a lot of movies — movies where people’s arms are chopped off, blood spurting, etc. So I’m curious why this film in particular is hard to watch. And I think the answer is because we are drawing you in, close as we can. You can’t reject it: You can’t say, ‘This isn’t real, so I don’t have to invest in it.’ I feel like the sound helps with that. The fact that the sound is not over the top — the fact that it’s tempered — makes it hard to put your distance from the film. So, I think it’s great that people are saying it’s difficult to watch. It makes me feel like what I do means something.” (Vulture)

About Director Steve McQueen
“Born in London, England in 1969, Steve McQueen is an artist, film director, and screenwriter currently based in London and Amsterdam. His themes are universal and often focus on painful biographies. McQueen has mastered the art of minimalist storytelling to deliver the utmost impact on his viewers. In his own words he “wants to put the public in a situation where everyone becomes acutely sensitive to themselves, to their body and respiration.” He has directed four feature films, most recently Widows (2018). His first, Hunger (2008), was awarded the Caméra d’Or at the Cannes Film Festival, and his third, 12 Years a Slave(2013), received the Golden Globe, Oscar, and BAFTA awards for best picture in 2014. Celebrated internationally for his art, McQueen has been featured in Documenta (1997 and 2002), represented the national pavilion of Great Britain at the Fifty-Third Venice Biennale in 2009, and been selected several times for the Venice Biennale’s central pavilion (2003, 2007, 2013, and 2015). Solo exhibitions of his work have been held at the Art Institute of Chicago (2012) and Schaulager, Basel (2013); and at the Whitworth Art Gallery, Manchester; the Museum of Modern Art, New York; and the Institute of Contemporary Art, Boston (all 2017). In 2019 he presented Year 3, a portrait of an entire age group of London schoolchildren, at Tate Britain, London. In February 2020 a major solo exhibition opened at the Tate Modern, London.” (www.mariangoodman.com)