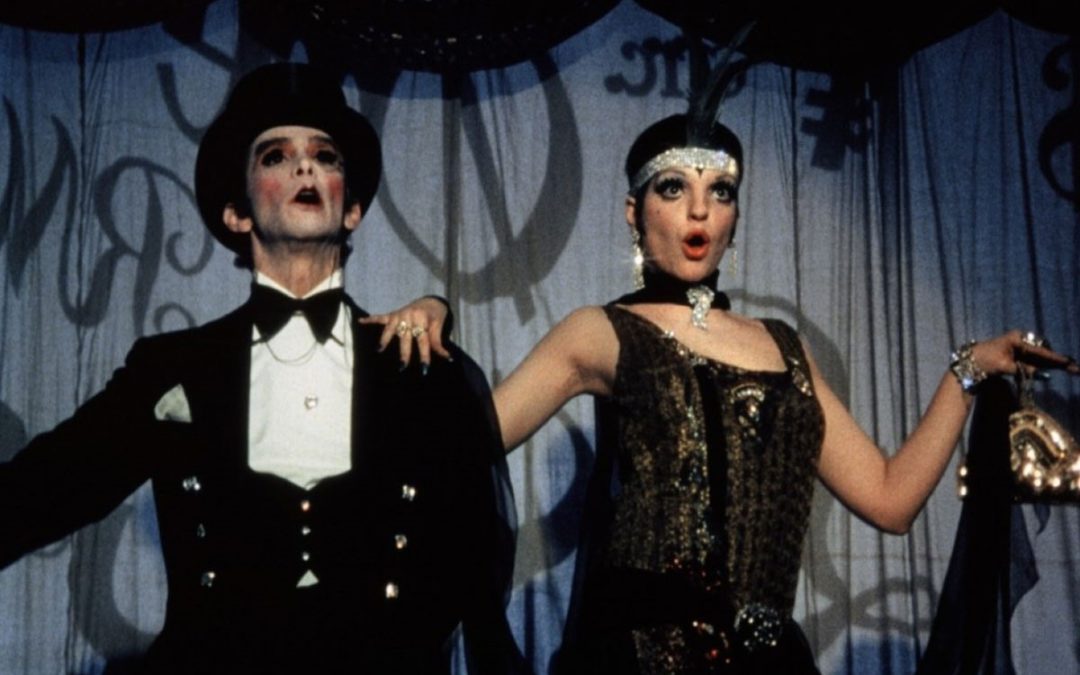 Traditionally, movie musicals have been known as pure escapism. Bob Fosse changed all that in 1972 with the utterly stylish “Cabaret” which won him an Academy Award for best director beating Francis Ford Coppola for “The Godfather.” “Cabaret” is thoroughly seductive, bawdy – dare I say dangerous – and unlike musicals of the golden era which were all about joy – this is thought-provoking, dealing with topics of corruption, sexuality, delusion and Nazism. But it’s so vibrant – so dazzling entertaining. And the performances…this made a superstar out of Liza Minnelli – winning a well-deserved Best Actress Oscar and her co-star and Joel Grey won Best Supporting Actor. To me the movie works the way I love listening to Frank Sinatra torch songs when I’m feeling down. It’s nourishing and cathartic to stare at the abyss – especially when seen through the kinetic and intoxicating eyes of Bob Fosse.

“What good is sitting, alone in your room?
come hear the music play!
Life is a Cabaret!, old chum”

Come to the “Cabaret!”

Cabaret
(Available to rent on Amazon)

Set in Berlin in 1931, as Nazism rises in Germany, flamboyant American Sally Bowles sings in a decadent nightclub and falls in love with a British language teacher – whom she shares with a homosexual German baron. But Sally’s carefree and tolerant cabaret world is about to be crushed under the boot of the Nazis as Berlin becomes a trap from which Sally’s German friends will not escape.

About Director Bob Fosse
Robert Fosse was born in Chicago, Illinois, on June 23, 1927. Fosse was the youngest of six children and at an early age began dancing in nightclubs as part of vaudeville and burlesque shows. “Fosse came to Hollywood in 1953, where he danced and sang in three musicals, including Kiss Me Kate. When movie musicals went into a period of decline, he returned to Broadway, where he was hired to choreograph The Pajama Game, which won him his first Tony Award. He picked up his second Tony the following year as choreographer for Damn Yankees, marking the beginning of his successful collaboration with the show’s star, Gwen Verdon.” (LA Times) Fosse staged and choreographed a variety show special for NBC, Liza with a Z, which brought Fosse an Emmy Award and made him the first person to ever win top honors in three entertainment mediums — stage, film, and television. (PBS)

Choosing Cabaret
“When the film came out in 1972, it blew away the sugary cliches of movie musicals with its candid depiction of sex, anti-Semitism, homosexuality, Nazism and abortion. Fosse also decided to confine almost all of the musical numbers to scenes at the Kit Kat Klub…giving the story a more realistic feel. All the songs were sung by either Sally or the MC. The only exception was the chilling Nazi-led anthem Tomorrow Belongs to Me. Cabaret was a critical and commercial hit. Fosse won for director, Minnelli for actress and Grey for supporting actor. It also won for cinematography, film editing, original song score or adaptation score, art direction and sound. It was added by the Library of Congress to the National Film Registry.” (USA Today)