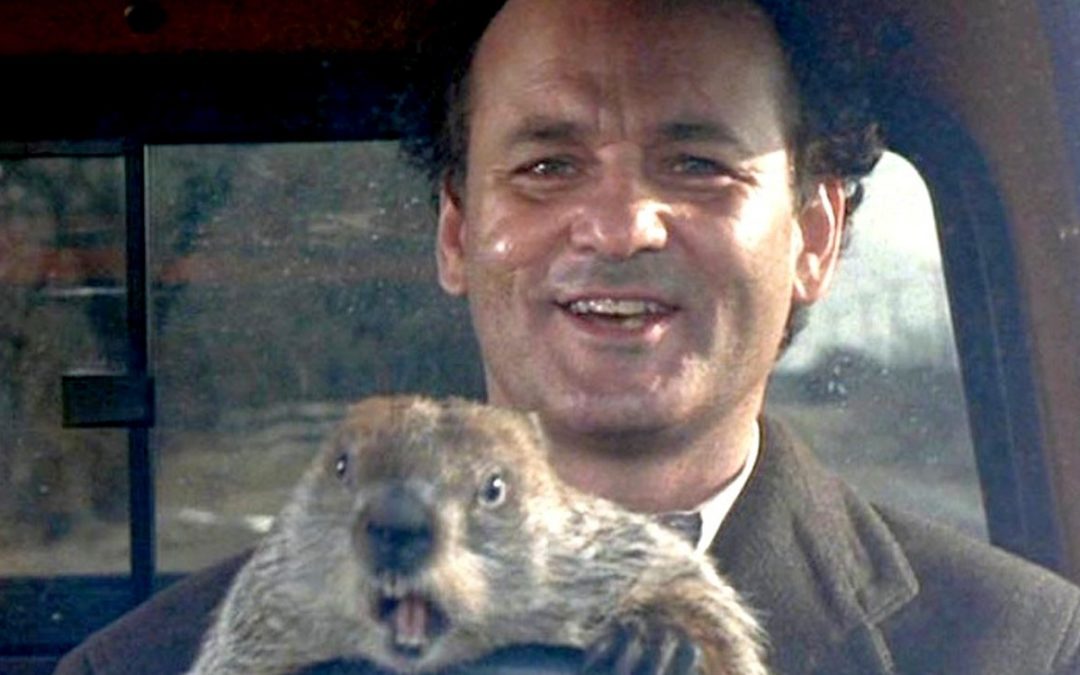 I have found that the past week where we have had our daily routines and habits altered has been an opportunity for introspection —and afforded me time to count the blessings and the important things in my life. That’s why I feel that “Groundhog Day”, starring a never-better Bill Murray, is one of the perfect movies to watch. This comedy is absolutely hysterical, lovable and sweet.

I find poignancy in the fact that the main character in ‘Groundhog Day” is living his life disengaged – and then when things start deviating from the norm – he starts to learn and grow as an individual. He gets the rare chance to redo and learn from his experiences; learning to love and live life to the fullest. He’s able to find redemption and to appreciate the possibilities that can be found in every day of our lives.

Phil: “Something is different.”
Rita: “Good or bad?”
Phil: “Anything different is good.”

Bill Murray is at his wry, wisecracking best in this riotous romantic comedy about a weatherman caught in a personal time warp on the worst day of his life. Teamed with a relentlessly cheerful producer (Andie MacDowell) and a smart-aleck cameraman (Chris Elliott), TV weatherman Phil Connors (Bill Murray) is sent to Punxsutawney, Pennsylvania, to cover the annual Groundhog Day festivities. But on his way out of town, Phil is caught in a giant blizzard, which he failed to predict, and finds himself stuck in small-town hell. Just when things couldn’t get any worse, they do. Phil wakes the next morning to find it’s Groundhog Day all over again… and again… and again.

About Director Harold Ramis
Director, writer, actor and comedian, Harold Ramis, grew up in Chicago and joined The Second City in 1969 after writing freelance and jokes for the Chicago Daily News and Playboy. During his time at Second City, he performed alongside John Belushi, who eventually brought him on to work on The National Lampoon Show. Ramis was the head writer for SCTV which he followed by writing National Lampoon’s Animal House. Ramis’ directorial debut was Caddyshack, which he also wrote. In 1981, he wrote and acted in Stripes, his third film alongside Murray. Ramis directed National Lampoon’s Vacation before directing Ghostbusters. He co-wrote the final script with Dan Aykroyd and went on to co-write and direct the film’s sequel. (Second City)

Choosing Groundhog Day
Screenwriter Danny Rubin, who, with Ramis, won the BAFTA screenplay award for Groundhog Day and earned a Tony nomination for his book of the musical version, explained the organic roots of the idea was “me telling a story of a man’s life, a man having a very, very long life. It was an experiment in my mind about eternity and whether a man like Phil Connors could change and maybe if he lived long enough, he would.” (Variety)

Groundhog Day
Punxsutawney, which only has about 5,500 residents, has seen an uptick in visitors with tourism numbers ranging from 15-30,000 depending on what day of the week Feb. 2 falls on. The year after the film was released, 35,000 people descended upon the village. Woodstock usually attracts about 1,000 guests for its Groundhog Day celebration, hailing from all over the country and even as far as Australia. “They want to come and visit the locations and be part of the festivities that they enjoy being depicted in the movie,” said Mayor Brian Sager. “They just find it pure enjoyable entertainment and they truly believe there are some lessons learned there in the movie.” There are also tours during the year where fans see the various locations from the movie. “It’s like going to Ireland for ‘Game of Thrones,” mused the film’s producer, Trevor Albert. (Variety)