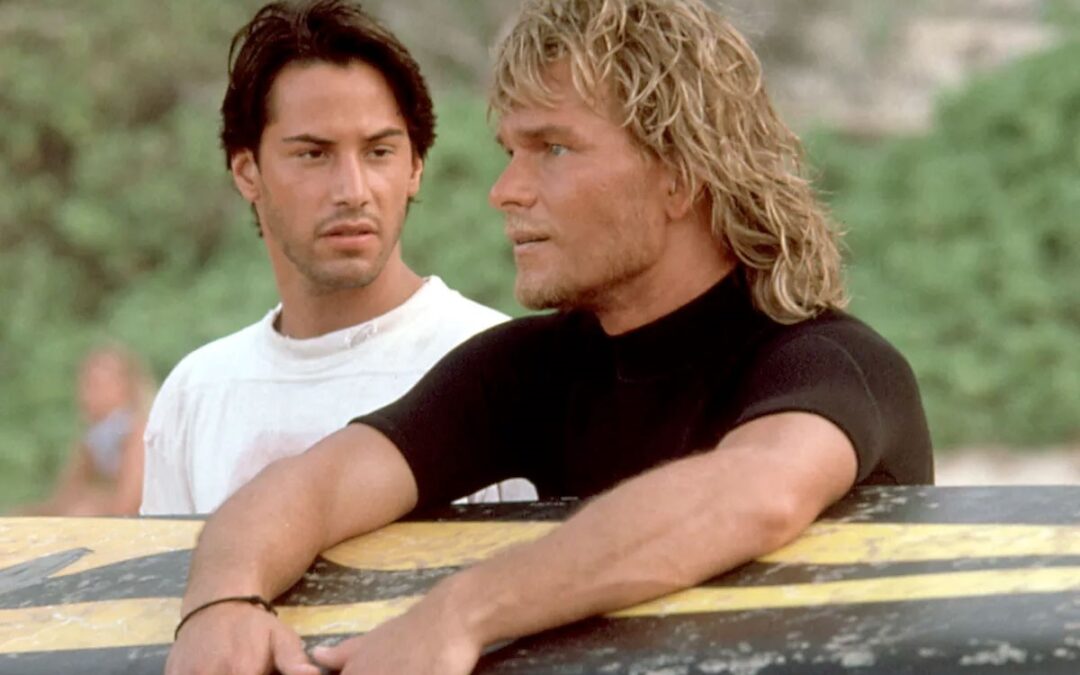 “It was never about money for us it was about us against the system. That system that kills the human spirit. We stand for something to those dead souls inching along the freeways in their metal coffins. We show them that the human spirit is still alive.”

It was thrilling to see again Kathryn Bigelow’s “Point Break”(1991) under the lens of our current hibernation. Its action sequences are like nothing you’ve seen, but the experiencing of life at its fullest – riding a big wave – going skydiving – taking chances – is the total opposite of what I’ve been facing lately in my new ultra-cautious way of living. I’ve been following the rules – and being good – wearing a mask, keeping social distances. Vicariously, it felt great to be in close proximity to Johnny Utah and Bodhi, and see the only female director to have won the Oscar (we need to rectify this!) take on male dominated actions movies and show the boys how it’s done. It’s one big adrenaline rush – and enough intellectual and philosophical underpinnings to keep you stimulated.

Thinking of the plot brings a big smile to my face. Johnny Utah (you gotta love that name), an injured Ohio State football star and now a rookie FBI agent, is brought to Los Angeles to help on a string of bank robberies committed by assailants who disguise themselves with masks bearing the likenesses of ex-Presidents. They’re in and out of branches in 90 seconds – bypassing the vault and only taking the cash that the tellers have on hand. Johnny’s paired up with Angelo Pappas (an in control Gary Busey) – a veteran of 20 years – who’s not too happy about his new partner. Bigelow plays up on that cliched situation in traditional action movies – and has their getting-to know-you scenes become an over the top testosterone spar. Pappas has a theory – the bank robbers must be surfers! They have left residue of Mr. Zog’s Sex Wax – which is rubbed on the surface of surfboards (are you smiling yet?!). Parenthetically, the film does a close-up of the label which was designed by Santa Barbara’s famous painter Hank Pitcher. The thieves have done 27 bank robberies in three years and only during the best times to surf – then they go to another locale in the world. So, Johnny begins to learn how to surf and to infiltrate the culture. “Hope you stick with it. Surfing’s the source. It can change your life,” a young kid at a surf shop tells him prophetically.

Johnny meets Tyler – a very androgynous athletic surfer – and he asks her to teach him how to surf. Side by side, they almost look like mirror images of each other. They become emotionally entangled – and through her, Johnny meets Bodhi. “He’s a modern savage,” Tyler explains. “He’s a real searcher.” Bodhi – is part guru and part extreme sports enthusiast who has a posse of followers with him. For Johnny and Bodhi it is love at first sight. The movie wallows in the homoerotic qualities of the relationship. Notice the bonding they do playing touch football on the sand and the way Bigelow shoots this sequence. As you may have guessed, Bodhi is the mastermind behind the bank robberies – and causes a transformation in Johnny. The rest of the story takes some very original turns all the way to the profound last scene. Bodhi and his group are adventure-seeking junkies and they rob because it subsidizes their kamikaze behavior. And of course, the robberies themselves are a way of courting danger as well.

Bigelow fought to get Keanu Reeves in the role – this was before he became known for “Speed” and the “Matrix.” There’s a puppy dog quality to him that diminishes as he starts to toughen up and become lured in. This might be his best performance in a film. Patrick Swayze plays Bodhi – and he’s sexy, mad and quite appealing. He has to deliver a few lines that could have been laughable from someone less capable. “So you still haven’t figured out what riding waves is all about, have you?” he asks Johnny with such conviction. “It’s a state of mind. It’s that place where you lose yourself and find yourself. You don’t know it yet, but you’ve got it.” He’s one of the best villains. It makes you appreciate this actor whom we lost too early, Both actors are easy on the eyes – a point that Bigelow’s camera celebrates.

Where to begin to praise Bigelow’s achievements? The movie was in development for many years and attached to different directors. At the time the project was being made, Bigelow was married to James Cameron. Both of them worked on major rewrites to the script. Cameron went uncredited. The action set pieces are breathtaking. At the first bank robbery, there are handheld cameras following each thief’s action. It’s so kinetic. Later there’s one of the most incredible chases in movies. Johnny is on foot running after Bodhi in a Reagan mask after he’s just robbed a bank. The Steadicam shots closely follow both pursuer and pursuant. They traverse alleyways, jump fences, plow themselves through private homes – get attacked by a pitbull. It’s a marvel of visceral filmmaking. The surfing is shot in stunning power – and the two skydiving scenes are jaw-dropping. The filmmaking – like Bodhi himself – is pushing the envelope.

On the Surfing and Stunts in “Point Break”
“To create the spectacular surfing scenes in ‘Point Break’…actor-surfer Dennis Jarvis, 31, the self-proclaimed ”surf doctor of Hollywood,” spent two months teaching landlubbers Patrick Swayze, Keanu Reeves, and Lori Petty, among others, how to catch a wave. ”It was like a big surf party every day,” says Jarvis. ”The cast would report to my house in Hermosa Beach at the crack of dawn to try to absorb the soulful life-style of a surfer.” But life wasn’t all wet and wild for the teacher and his pupils. ”They were basically all beginners,” Jarvis says. ”Patrick said he’d been on a board a couple of times, Keanu definitely hadn’t surfed before, and Lori had never been in the ocean in her life.” While Reeves’ awkward ”stinkbug” style was appropriate for his character, Swayze and Petty needed to pass as experts. ”I wasn’t concerned with if they could do a roundhouse cutback,” Jarvis says. ”They had doubles for that. My focus was on giving them the mannerisms of a hot, professional surfer.” Reeves, for one, took the lessons to heart: Jarvis has just finished building him one of his custom-made Spyder boards so now the actor can hang 10 off camera as well.” (ew.com)

Patrick Swayze on “Point Break”
“In a way, the reason I wanted to do this role was an opportunity for me to sort out my adrenaline-junkie side,” Swayze, who had jumped out of a plane dozens of times before he was asked to please stop (for insurance purposes) when filming got underway, said in a making-of featurette. The “100 percent pure adrenaline” skydiving sequences were rigged to look like they were thousands of miles in the air, but the only actual mid-air jump comes after Swayze says, “Adios, amigo!” “He did the flips and falling to the ground, and he did it with an open heart,” Reeves later remembered of his co-star. “He was a beautiful person, an artist. Patrick, he just wanted to experience life and for his work he wanted to take the opportunity of the film and it gave him that sense.” Swayze also learned how to surf and cracked some ribs shooting one scene, but big-wave expert Darrick Doerner was his double when he paddles out for the last time. However, that didn’t stop one of Bodhi’s custom-designed boards from selling for $64,000 at a movie memorabilia auction in 2017. In addition to boasting an inscription on the bottom with the designer’s name, reading “Dennis Jarvis, California, 02635, for Patrick Swayze,” there was apparently an extra divot built in to accommodate Swayze’s “pronounced chest bone.” (eonline.com)

About Cinematographer Donald Peterman
Born in Los Angeles, Donald William Peterman served in the Army in the early 1950s, traveling the country to film an Army documentary to air on television. After the service, he started working at Hal Roach Studios as a film loader at age 22. From Roach he moved to Cascade Studios, where he worked with an animation camera and an optical printer. He exited to work on the “Lassie” series but returned to Cascade to work on commercials as staff director of photography. He earned his first feature film credit as d.p. on the slasher film “When a Stranger Calls,” released in 1979. In 1997 Peterman was injured during lensing of “Mighty Joe Young.” Peterman’s last film was 2000’s “How the Grinch Stole Christmas.” He was a member of the American Society of Cinematographers and of the Academy of Motion Picture Arts & Sciences…Peterman’s film credits also include “Splash” in 1984, “Cocoon” (1985), “Point Break” (1991) and “Get Shorty” (1995)…Peterman… drew Oscar nominations for 1983’s “Flashdance” and 1986’s and “Star Trek IV: The Voyage Home.” (variety.com)

About Director Kathryn Bigelow
Kathryn Bigelow was born on November 27, 1951 in San Carlos, California. Bigelow studied painting at the San Francisco Art Institute, and in the early 1970s she moved to New York City to participate in the Whitney Museum’s independent study program. She soon became interested in filmmaking and eventually earned a scholarship to the graduate film school at Columbia University. There she made the short film “The Set-Up” (1978). After graduating from Columbia in 1979, Bigelow began working on her first feature-length movie, “The Loveless,” which she co-wrote and co-directed (with Monty Montgomery). The 1982 drama, starring a then unknown Willem Dafoe, focused on a motorcycle gang’s visit to a small Southern town and the ensuing violence. Bigelow was subsequently sent a number of scripts, most of which were high-school comedies. Uninterested in the offers, she instead began teaching at the California Institute of the Arts in 1983. In 1987 Bigelow returned to the big screen with “Near Dark,” a vampire film that became a cult classic. Two years later she married director James Cameron (divorced 1991). She described “Blue Steel” (1989), which she co-wrote and directed, as a “woman’s action film.” The crime drama starred Jamie Lee Curtis as a policewoman who is stalked by a serial killer. Bigelow’s next film, “Point Break” (1991), centres on a FBI agent (played by Keanu Reeves) whose loyalty is tested when he infiltrates a charismatic gang of bank-robbing surfers. In addition to being a box-office success, it solidified Bigelow’s place in the traditionally male-dominated world of action films.

With the science-fiction movie “Strange Days” (1995), she created a stylish drama involving futuristic technology that enables the transmission of thoughts and memories from one person to another. After “The Weight of Water” (2000), Bigelow helmed “K-19: The Widowmaker” (2002). Based on a true event, it focuses on a Soviet nuclear submarine that suffers a radiation leak…Bigelow’s next directorial project was the Iraq War drama “The Hurt Locker” (2008). The low-budget film follows an elite squad of bomb detonators working in Iraq. Avoiding the politics of the war, she explored the dangers of armed conflict and the attraction it holds for some soldiers. In addition to Bigelow’s Oscar win for director, the movie earned five other Academy Awards, including best picture. Bigelow subsequently re-teamed with “The Hurt Locker” screenwriter Mark Boal to make “Zero Dark Thirty” (2012), an unflinching account of the U.S. military and intelligence operation to capture Osama bin Laden. She also collaborated with Boal on “Detroit” (2017), about the city’s 1967 riot. (britannica.com)