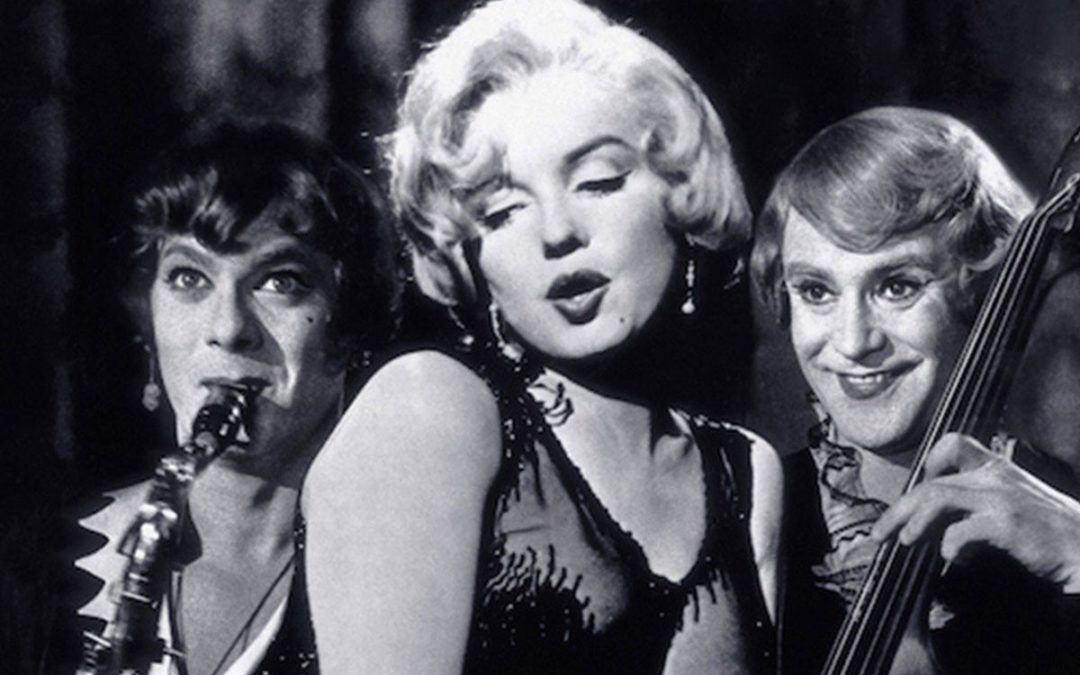 I think we all need a good laugh – and I encourage you to see “Some Like It Hot” – what many critics consider to be the greatest comedy ever made. In 1959, Billy Wilder concocted this hilarious farce that moves swiftly – and has at it core Tony Curtis and Jack Lemmon are their comedic best. In my opinion, Marilyn Monroe gives her best performance – you can’t take your eyes off her when she’s on the screen.

What I’ve always loved about this film – and now has more added urgency – is the desperate measures one will go to for survival – our adaptability as human beings – our fluidity. Joe becomes Josephine and Jerry becomes Daphne to survive.

There are other serious issues being dealt with underneath all the hilarity. Wilder is making us navigate through sexual identities – and very subtly indicts capitalism and big business. Notice the man who pretends to run Shell Oil.

The entire dialogue is snappy, effervescent and full of double entendres. The last line – which I will not spoil is probably the greatest ending in movie history. Most poignant to me is the below exchange,

Joe: “But you’re not a girl! You’re a guy, and why would a guy wanna marry a guy?

Treat yourselves tonight to some well-earned laughs.

Some Like It Hot
(Available to stream on Hulu and Amazon. Available to rent on iTunes, Vudu, YouTube and Google Play)

Two Struggling musicians witness the St. Valentine’s Day Massacre and are now on the run from the Mob. Jerry and Joe cross-dress into an all female band. In addition to hiding, each has his own problems; One falls for another band member but can’t tell her his gender, and the other has a rich suitor who will not take “No,” for an answer.

About Director Billy Wilder
Billy Wilder was born Samuel Wilder on June 22, 1906, in Sucha, a village in Galicia, an Austro-Hungarian province that is now part of Poland. His mother, who was in love with all things American, nicknamed him Billie in honor of the Buffalo Bill Wild West show. (New York Times) In 1929 Wilder had his first break working on the German film Menschen Am Sontag (People on Sunday). He remained in Germany co-writing and directing films until the rise of the Nazis forced him to move to France, and ultimately to the United States. Wilder arrived in Hollywood in 1934. He worked on and off until 1938, when he began a long and fruitful collaboration with Charles Brackett, which lasted twelve years. His films range from stark melodrama, like Double Indemnity, The Lost Weekend and Sunset Boulevard, to antic farce, such as The Seven Year Itch, and Some Like It Hot, to satiric comedy, like A Foreign Affair and The Apartment. With over fifty films and six Academy Awards to his credit, he is one of Hollywood’s all-time greatest directors, producers and screenwriters. (PBS)

The Release of Some Like It Hot
“In 1959, on hearing that Billy Wilder was making a comedy that started with a machine-gun massacre, the producer David O Selznick warned: “They’re going to walk out in droves!” The first test screening seemed to prove him right – the middle-aged, small-town audience stayed silent; some shuffled in their seats and some, indeed, walked out. One person laughed, once. Some Like It Hot nearly died there. At Wilder’s insistence, they tried again, playing the film to a largely student crowd in a college town. They loved it. And most who see it have loved it ever since.” (The Guardian)

The Time Period of Some Like It Hot
“By setting the film in 1929, the scriptwriters, Wilder and IAL Diamond, tease out the ironies of history. It is Gatsby’s decade, an oasis of dreaming. Sugar Kane is on the hunt for millionaires, not realising that they are an endangered species, with the Wall Street crash only months away. A nostalgia suffuses the film, offering a backward glance to the world of Wilder’s own youth. Back there, in the days before his flight from Europe to America, there’s not yet been a Great Depression, an Anschluss, an Auschwitz.” (The Guardian)

Choosing Some Like It Hot
In Curtis’s memoir about the making of the film, he confirms that Wilder and Diamond embedded this theme in its title. People, he argues, can be as fluid as the pop songs of the 1920s, which were performed in different styles – either “sweet” or “hot” – according to the audience’s preference. “The concept was important to our movie,” writes Curtis. “A person can be more than one thing, depending on the time, the place, whatever. Sweet or hot.” (BBC)