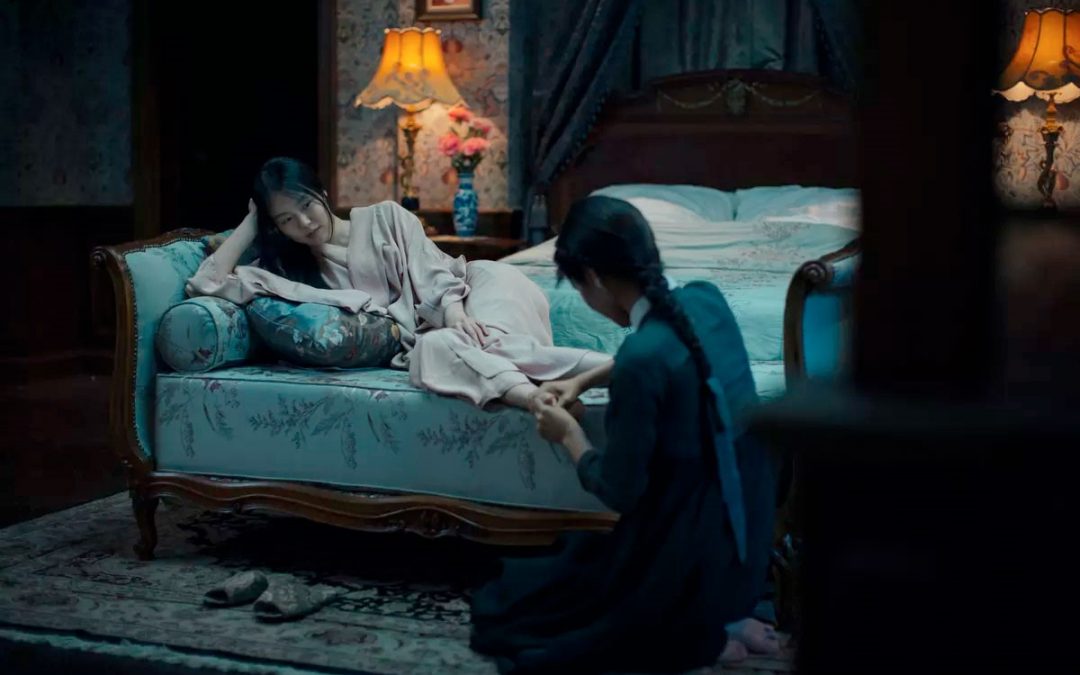 “The Handmaiden” (2016) is a lush and erotic thriller from Korea – that deals with colonialism and its relationship to pornography and feminism. Did I catch your attention? We’re talking high art here – but yes the film is titillating and shocking at times in all the right ways for it’s all grounded in deep ideas. There’s also one head-spinning storyline upheaval that happens half way that makes you rethink everything you’ve seen up until that moment – so you may have to see this movie several times – like I have – to fully relish in its extravagance and intoxication. Did I say this film is decadent?

It is directed by South Korean auteur Park Chan-wook, – one of the world’s most acclaimed directors – responsible for The Vengeance Trilogy – comprised of “Sympathy for Mr. Vengeance” (2002), “Oldboy” (2003,) and “Lady Vengeance” (2005.) He has a very particular style that combines a gorgeous visual landscape and composition with blood. However, the gore is never gratuitous – it is rooted in thought and heart – and a deep care for the characters.

“The Handmaiden” is loosely based on Sarah Water’s novel “Fingersmith” which is set in Victorian England. Chan-wook sets his adaptation instead in 1930s Korea under Japanese colonial rule – a fact that makes the original story’s challenge of patriarchal norms of sexuality even richer and more multi-layered. Even language becomes a form of tug and war, a fact that will not get lost on us, a Western audience, because when Japanese is spoken the subtitles are green and Korean subtitles are white. The plot follows a Korean con man who pretends to be a Count to defraud Lady Hideko out of her inheritance with the aid of an orphaned purse snatcher who will disguise herself as the handmaiden – Sookee. Lady Hideko lives in a secluded estate – and we find out she’s under the grip of her uncle’s dominance. There’s a basement, a theatre, a puppet, asphyxiation, rare books, pornography and an octopus.

It all gravitates around the relationship between Lady Hideko and her servant Sookee which in itself becomes an exploration of power between the classes, female sexuality and Korean national identity. The love of these two women is suppressed by a patriarchy – in the same way that Korean tradition was harnessed by Japanese occupation. The sumptuous art direction and design strengthen these themes as does the narrative 180-degree-turn I referred to earlier. Lady Hideko asks her maiden to teach her what to do on her wedding night. “How would I know? I grew up without a mother to teach me. I have no idea about any of this?”

The movie is totally enthralling – twisted – and cheeks-blushingly sensuous. There’s a scene that involves a thimble and teeth filing that is probably one of the most suggestive things I’ve seen. The movie plays like an eroticized Hitchcock’s “Rebecca.” It’s so cinematic – and rich – and perverse.

If you love cinema, you owe it to yourself to see this treat.

The Handmaiden
Available to stream on Amazon Prime and to rent on Vudu, FandangoNOW, Google Play and Microsoft.

Bringing “The Handmaiden” to the Screen
In an interview with The Hollywood Reporter, director and co-writer Park Chan-wook discusses “The Handmaiden.” “There were two vital conditions that I believed were necessary for adapting the novel. The first was the existence of a class system and the other was the Western institution of the mental hospital. It would have been pointless to remake the story if I lost one or the other, so my only choice was the Japanese colonial era, when Korea was undergoing modernization and Westernization. It’s important for films to explore the independence movement and anti-colonialism. But unlike many Korean dramas, which tend to automatically depict the Japanese as villains, my characters aren’t good or evil just by virtue of being Korean or Japanese. My story is about individual lives set during a particular era. I did not try to isolate the story by removing it from historical events, nor did I allow history to overpower the narrative. I felt it was important to portray the changing spirit of the time, however, such as class conflicts, women’s issues, as well medical issues and how mental illnesses were feared and led to prison-like confinement. From the larger scheme of things I am a genre filmmaker, albeit one of slightly altered genres. Even though I explore such a genre-specific topic as homosexuality, it was not my intention to make a human rights film showing individuals overcoming discrimination. Similar to how I wanted to focus on individuals living through the colonial era rather than a story about the colonial era itself, I always wanted to create a movie that portrayed [homosexual romance] as something natural, as just a normal part of life.” (The Hollywood Reporter)

The Making of “The Handmaiden”
“There were talks of 3D during the initial stages of the project, but it became a budget issue. I sometimes wonder even now what it would have been like in 3D. The first part of the story is told from the point of view of the protagonist, who then becomes the subject of observation in the second half. There are elements of voyeurism and observing others from behind doors and closets, and I thought it would be interesting to utilize 3D visuals in a hushed manner. Hitchcock already did this in “Dial M for Murder,” but the technology at the time made it a little shoddy. I thought it would workwell using modern-day technology. In Korea, however, it is no longer possible [since all cinemas have become digitized]. To achieve the analogue look, I got a 1970s anamorphic CinemaScope lens by Hawk, and I’m quite satisfied…I wanted to re-create the color palette of old Technicolor movies, which I think Tarantino would have done already if he could, but it’s impossible unless you use the film technology from that time. Even for my photography, it was only recently that I went digital. Nowadays I take digital photos and then edit them on my iPad using simple apps. I discovered the fun and convenience of this process. I took Leica monochrome photos on the set of “The Handmaiden,” which I plan to publish as a book.

I cut down the number of takes after seeing how speedy productions were in Hollywood. We took more than 100 shots for Thirst, but for “The Handmaiden,” I was able to actually downsize to 68 from what was originally planned as 70-something. Having more shots enables you to edit on the site, hold meetings and have fun as active participants of the cooperative art that is filmmaking. But efficiency didn’t mean sacrificing all the joys of the joint creative process, and moreover it enabled us to keep safely within the budget and to honor the labor contract conditions [for cast and crew, which is a relatively new phenomenon in Korea].” (The Hollywood Reporter)

Casting Kim Min-hee and Ha Jung-woo
“I had known there would come a day when I would work with Kim Min-hee and Ha Jung-woo. I saw Kim in “Helpless” and “Very Ordinary Couple,” and it’s needless to talk about Ha. For his count character, I wanted someone who, when he’s not being a swindler, wouldn’t always seem aristocratic and elegant, but sort of lax and an ordinary good-for-nothing. The film I liked him best in was “My Dear Enemy.” Kim has an aristocratic elegance and poise, a kind of coldness – but also fragility. The character needed both. Also, she had absolutely no qualms about playing a homosexual character, which in Korea actors can be considerably reluctant to do.” (www.screendaily.com)

About Director Park Chan-wook
“After graduating from the Department of Philosophy, he began working in the film industry as an assistant director to Gwak Jae-young on “A Sketch of a Rainy Day” (1988). In 1992, he directed his first feature, “The Moon Is…the Sun’s Dream,” a gangster drama, and shifted gears into comedy with 1997’s “Trio,” a romp about three pals on the run from the law. Neither of these films gained much recognition, but his next film, “Joint Security Area,” struck a nerve with Korean audiences, partly because it was released at a time when relations between the North and South Korean governments were beginning to thaw, but also because it’s a well-made, extremely moving film. Rather than following his success with something similar, Park once again changed direction with his next movie, the kidnapping drama “Sympathy for Mister Vengeance” (2002). With its heavy doses of excruciating violence and a set of characters bent on destroying one another, it’s a much more disturbing film than his previous efforts. While it is very different from “Joint Security Area,” it does make a similar point about how easily “normal” people can be driven to perform horrific acts. Even though he is now one of Korea’s most commercially successful directors, he still finds time to collaborate with other filmmakers, co-writing and co-editing Park Chan-ok’s 2002 debut feature, “Jealousy Is My Middle Name.” (Rotten Tomatoes) A few of his other films include “Oldboy” (2003), “Lady Vengeance” (2005), “I’m a Cyborg, But That’s OK” (2006), “Thirst” (2009), “60 Seconds of Solitude in Year Zero” (2011), “Stoker” (2013), “Bitter Sweet Seoul” (2014), “The Handmaiden” (2016) and most recently the television series, “The Little Drummer Girl” (2018).